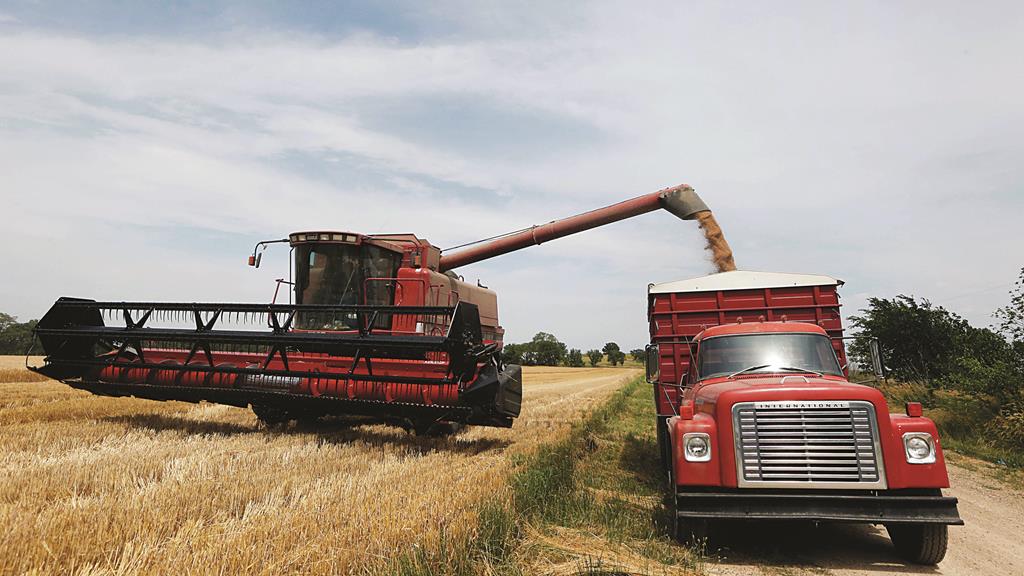 Russia retaliated Thursday for sanctions over the crisis in Ukraine by banning most food imports from the West, dealing a blow to Europe that also takes aim at hurting the U.S., Canada and Australia.

In choosing to make an economic move, President Vladimir Putin signaled he isn’t ready at this point to send troops into Ukraine. He also showed he’s willing to inflict significant pain on his own people to make a point.

The U.S. and the European Union have accused Russia, which annexed Ukraine’s Crimean Peninsula in March, of supplying arms and expertise to a pro-Moscow insurgency in eastern Ukraine, and have responded by slapping sanctions on Russian individuals and companies. Tensions rose further last month when a Malaysian jetliner was shot down over rebel-held territory, killing all 298 people aboard, and the West accused Russia of most likely providing the militants with the missiles that may have been used to bring the plane down.

Moscow denies supporting the rebels and accuses the West of blocking attempts at a political settlement by encouraging Kiev to use its military to crush the insurgency.

The ban, announced by a somber Prime Minister Dmitry Medvedev at a Cabinet meeting, covers all imports of meat, fish, fruit, vegetables, milk and milk products from the U.S. and Canada; all 28 EU countries, plus Norway; and Australia. It will last for one year.

“Until the last moment, we hoped that our foreign colleagues would understand that sanctions lead to a deadlock and no one needs them,” Medvedev said. “But they didn’t, and the situation now requires us to take retaliatory measures.”

That retaliation, however, could hurt Russia as much as the West. With the inclusion of Ukraine, most of whose food products also have been banned, Russia has now cut off 55 percent of its agricultural imports, including about 95 percent of its imported milk, cheese and yogurt. 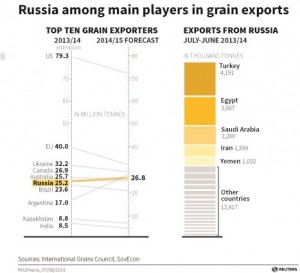 In 2013, the EU exported 11.8 billion euros ($15.8 billion) in agricultural goods to Russia, while the U.S. sent $1.3 billion in food and agricultural goods, including about $300 million worth of poultry. Russia accounts for about a tenth of EU agricultural exports, its second-largest market after the United States.

Washington dismissed Moscow’s ban as trivial to the U.S. but destructive to Russia’s own population.

“What the Russians have done here is limit the Russian people’s access to food,” said David Cohen, U.S. Treasury undersecretary in charge of economic sanctions. He said the U.S. is ready to impose more sanctions against Russia if it doesn’t de-escalate the conflict in Ukraine.

The damage to consumers will be particularly great in big cities like Moscow, where imported food fills an estimated 60 percent to 70 percent of the market and affluent consumers have grown accustomed to shops stocked with a wide range of imported products.

The measure led to sardonic comments on Russian online media, bringing back memories of empty store shelves during Soviet times, but there was no immediate indication of consumers trying to stock up.

“And so what? Instead of Spanish fruit we’ll have, I don’t know, fruit from Israel. It doesn’t bother me,” said Irina Ivanova, who was shopping at an upscale grocery store in Moscow.

Although the U.S., Canada and the European Union together will take more than a $17.5 billion hit, Russian consumers may feel it more than Western farmers.

Many U.S. food companies that sell to Russia have already set up some operations there. A spokeswoman for Mondelez International, Inc., which makes Oreos, Chips Ahoy cookies and Ritz crackers, said the company uses local suppliers and local production facilities.

Worth Sparkman, a spokesman for Springdale, Arkansas- based Tyson Foods — one of the world’s largest processors of chicken and beef — said the chicken the company ships to Russia will be absorbed by the the company’s 130 other markets.

Mike Cockrell of Laurel, Mississippi-based Sanderson Farms, Inc., said Russia is not as big a market as it once was. Still, “an 87.5 million-pound customer is a good customer, and we’ll have to replace that,” he said.