As Hawaii braced Thursday for two hurricanes — which would be the first to hit the state in 22 years — a magnitude 4.5 earthquake shook Waimea on the eastern shore of the Big Island, according to the U.S. Geological Survey.

The Pacific Tsunami Warning Center said some areas may have experienced shaking, but no tsunami was expected. The earthquake hit at a depth of 7.9 miles.

There were no reports of damage from the 6:24 a.m. temblor, but the news heightened the concerns of island residents, who have been stocking up on food and water in anticipation of the approaching storms.

Category 1 Iselle was expected to hit Thursday evening local time and Category 2 Julio, which is traveling closely behind Iselle, is expected to hit over the weekend or early next week, the National Weather Service said. 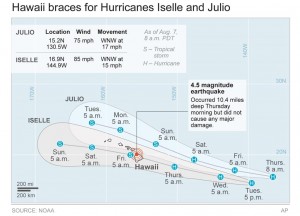 Mary Roblee, owner of the Ala Kai Bed and Breakfast in Hilo, located about 400 feet from the ocean in the Puna Peninsula, said that in her 10 years on the Big Island, she expects these two storms to be “by far, the worst.”

“We’re very worried,” she said. “We are prepared to evacuate if we have to.”

She said a storm six months ago with 50-mph winds took out the shingles on her roof, and that she fears her roof will be completely destroyed by Iselle’s winds, let alone Julio’s.

Hawaiian Airlines waived reservation change fees and fare differences for passengers who wanted to alter their travel plans because of the hurricanes, according to the airline’s website.