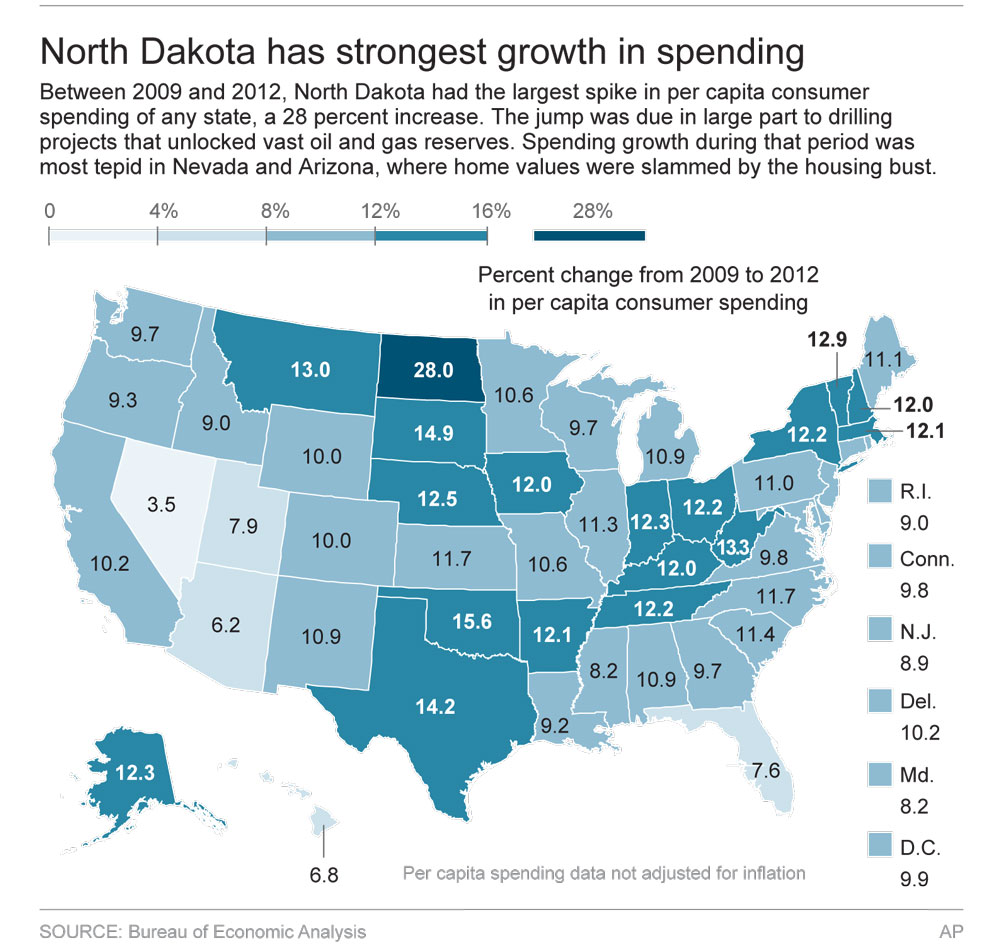 North Dakotans, enriched by an oil boom, stepped up their spending at triple the national pace in the three years that followed the Great Recession. In Nevada, smacked hard by the housing bust, consumers barely increased their spending.

Americans spend the most, per person, on housing in Washington, D.C., and the least in West Virginia.

Those and other figures emerged Thursday from a new annual report from the government that for the first time reveals consumer spending on a state-by-state basis from 1997 through 2012. The numbers point to substantial shifts in the economy since the recession ended. The recession, which began in December 2007, officially ended in June 2009.

Spending jumped 28 percent in North Dakota, the largest gain nationwide, from 2009 through 2012. It surged nearly 16 percent in Oklahoma. The next-largest increases were in South Dakota, Texas and West Virginia.

North Dakota has boomed in large part because of a breakthrough drilling technique, known as hydraulic fracturing, or “fracking,” that has unlocked vast oil and gas reserves. The state’s per-person income soared 37.2 percent, before inflation, from 2009 through 2012, according to a separate report released this year. That’s by far the most for any state. North Dakota’s unemployment rate was a barely visible 2.7 percent in June, the lowest in the nation.

By contrast, spending eked out a scant 3.5 percent increase in Nevada, the weakest for any state and far below the 10.7 percent national average. Arizona’s 6.2 percent increase was next-weakest, followed by Hawaii’s, Florida’s and Utah’s.

When the housing bust struck in 2006, home values plummeted in Nevada, Arizona and Florida. The persistently weak consumer spending in those states underscores the lingering damage the housing bust inflicted on their economies.

Nevada and Arizona also received the smallest income gains in the first three years after the recession ended. Salaries and other income in Nevada rose just 3.8 percent, and in Arizona, 6.7 percent. The national average was 11.1 percent.

And Nevada’s unemployment rate was 7.7 percent in June, the third-highest. Arizona’s was 6.9 percent, 10th-highest.

The government’s figures show that state-by-state spending patterns were radically different before the recession. In the three years leading up to the downturn, for example, spending in Arizona jumped 21.2 percent, the fourth-highest in the nation. Big home-price gains during the housing bubble likely fueled more spending.

North Dakota’s spending growth was only 12th-highest in those years. Spending rose the most in Wyoming, where it surged 24.5 percent, followed by Louisiana and Hawaii.

The report points to wide spending disparities elsewhere in the country. Per-person spending in 2012 was highest in Washington, D.C., at $59,423, followed by Massachusetts, at $47,308. The next-highest per-person spending totals were in Connecticut, North Dakota and New Jersey.

The government’s new report includes figures for specific spending categories. For example, in 2012, consumers spent the most on housing and utilities in Washington, D.C., where per-capita spending reached $11,985, followed by Hawaii, at $10,002. Connecticut and Maryland ranked third and fourth. Those figures largely reflect high rents in those areas.

The individual categories of spending data tend to coincide with regional cost-of-living differences. Consumers in Alaska, where food costs are generally high, spent the most on groceries, laying out $3,852 in 2012, followed by Vermont, at $3,622, New Hampshire, at $3,616, and Hawaii, at $3,615.

The cold-weather state of North Dakota led the nation in spending on gas and energy, paying a per capita $3,916 in 2012. Wyoming, South Dakota and Maine spent the next-largest amounts.

Hawaii spent the least, at just $882, followed by New York, Florida and California.