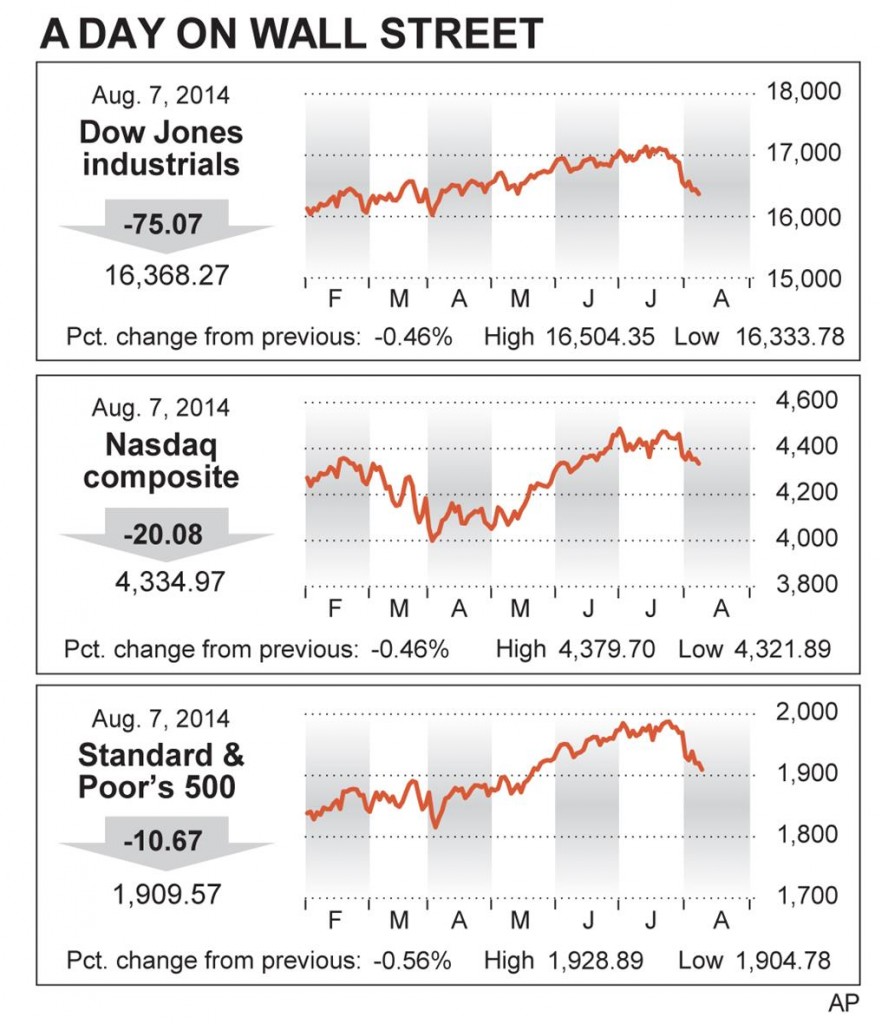 Concerns about slowing global growth and the threat of rising tensions between Russia and the West pushed stocks lower on Thursday.

The stock market started the day higher as investors mulled the latest earnings reports and an encouraging report on jobs. By mid-morning, though, the market had given up its gains. While stocks slumped, government bond prices rose, pushing the yield on the 10-year Treasury note to its lowest level this year.

Stocks have slumped since the Standard & Poor’s 500 index closed at a record last month amid worries that the rising tensions between Russia and the West will hurt global economic growth. European Central Bank head Mario Draghi cautioned Thursday that the crisis in Ukraine could crimp the fragile recovery in the region.

“You’re getting some good earnings, but it’s just not enough to overwhelm the geo-political issues,” said Drew Wilson, an equity analyst with Fenimore Asset Management.

Phone and internet companies were among the day’s biggest decliners.

Eight of the 100 industry sectors in the S&P 500 fell. Health care and phone company stocks dropped the most, 1.2 percent and 1 percent respectively. Utilities stocks rose 1.1 percent, making them the biggest gainers, as investors bought safer assets.

The market had started the day higher as investors assessed the latest encouraging news from the job market.

Early gains for stocks were short-lived Thursday. The market started to head lower by lunchtime, and as stocks slumped, bond prices rose. The yield on the 10-year Treasury note, which falls when prices rise, dropped to 2.41 percent from 2.48 percent on Wednesday. The yield on the note is at its lowest level in more than a year.

At the start of this year, many investors and analysts had expected 10-year Treasurys to fall as the economy continued its recovery and the Federal Reserve wound down its economic stimulus program. Instead, the opposite has happened. Bonds have rallied as inflation has remained low and doubts have arisen about the prospects for long-term growth.

U.S. Treasury securities also offer a higher yield than bonds issued by other governments. The yield on the 10-year German government bond is 1.06 percent, and French government bonds with the same maturity offer a yield of 1.5 percent. Investors are also buying Treasuries as geopolitical tensions rise around the world.

“The Treasury market is going to continue to confound the bears,” said Bill O’Donnell, chief Treasury strategist at RBS.

In commodities trading, the price of oil rose Thursday for only the second day in the past nine. There are concerns about intensifying violence in Iraq as the White House weighs air strikes to counter recent advances by insurgents.

Benchmark U.S. crude oil rose 42 cents to close at $97.34 a barrel on the New York Mercantile Exchange. Brent crude, a benchmark for international oils used by many U.S. refineries, rose 85 cents to close at $105.44 on the ICE Futures exchange in London.