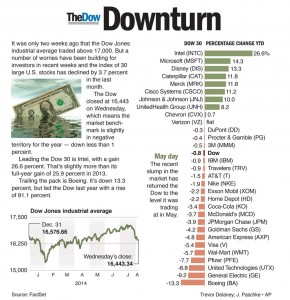 U.S. stocks stabilized on Wednesday after earnings from a major beer brewer helped the market stem its recent declines.

The stock market ended the day little changed after a sizable drop a day earlier, when Russia massed troops near its border with Ukraine.

Molson Coors was the biggest gainer in the Standard & Poor’s 500 index after the company reported better-than-forecast earnings. Rupert Murdoch’s 21st Century Fox rose after the company said it was dropping a bid to acquire Time Warner, while Sprint plunged after it abandoned its effort to acquire T-Mobile US.

The stock market has become more volatile in recent weeks, and slumped last month to its first monthly decline since January. Investors are weighing signs that the U.S. economy is strengthening against the threat of an escalating conflict in Ukraine, as well as the prospect of the Federal Reserve raising its benchmark interest rate.

“On the one hand the U.S. economy is really starting to look good, but on the other hand, the markets are certainly jittery about what’s going on in Ukraine and Russia,” said Anastasia Amoroso, Global Markets Strategist at J.P. Morgan Funds.

Molson Coors rose $3.87, or 5.8 percent, to $71.08 after the company said its second-quarter profit rose 9 percent as better pricing offset a global decline in the volume of beer sales.

As well as watching earnings, investors were looking at two merger bids that unraveled.

Sprint plunged $1.38, or 19 percent, to $5.90 after the company said it was abandoning its pursuit of T-Mobile US. Sprint would have struggled to convince regulators to approve a merger of the No. 3 and No. 4 cellphone carriers in the nation, according to The Wall Street Journal. Sprint is also replacing its longtime CEO.

Stocks may oscillate in a trading range in coming days as investors follow developments in Ukraine and assess their impact on the global economy, said Peter Cardillo, chief market economist at Rockwell Global Capital.

The U.S. economy is unlikely to be directly impacted by the economic fallout from the escalating tensions between Russia and the West. Europe, though, is dependent on Russian natural gas for heat and electricity. Germany imports nearly all its natural gas from Russia, and France also gets a significant amount of its energy needs from Russia.

“I don’t think the market is afraid of any military intervention, but it certainly is focusing on the negative aspects of an economic war,” said Cardillo.

A sign of improved demand for gasoline in the U.S. wasn’t enough to pull oil out of its downward slide Wednesday. After starting the day trading higher, benchmark U.S. crude oil fell 46 cents, or 0.5 percent, to $96.92 a barrel on the New York Mercantile Exchange. It was the benchmark’s 11th loss in the last 13 trading sessions, and the first close below $97 since Feb. 3.

U.S. government bond prices rose. The yield on the 10-year Treasury note declined to 2.47 percent from 2.48 percent on Tuesday. The yield is close to its low for the year of 2.45 percent, which was reached in May.

This article appeared in print on page 32 of the August 7th, 2014 edition of Hamodia.