Nigeria Rushes to Get Isolation Tents for Ebola 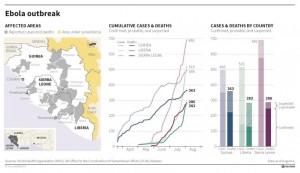 Nigerian authorities rushed to obtain isolation tents Wednesday in anticipation of more Ebola infections as they disclosed five more cases of the virus and a death in Africa’s most populous nation, where officials were racing to keep the gruesome disease confined to a small group of patients.

The five new Nigerian cases were all in Lagos, a megacity of 21 million people in a country already beset with poor health-care infrastructure and widespread corruption, and all five were reported to have had direct contact with one infected man.

Meanwhile, the World Health Organization began a meeting to decide whether the crisis, the worst recorded outbreak of its kind, amounts to an international public health emergency. At least 932 deaths in four countries have been blamed on the illness, with 1,711 reported cases.

In recent years, the WHO has declared an emergency only twice, for swine flu in 2009 and polio in May. The declaration would probably come with recommendations on travel and trade restrictions and wider Ebola screening. It also would be an acknowledgment that the situation is critical and could worsen without a fast global response.

The group did not immediately confirm the new cases reported in Nigeria. And Nigerian authorities did not release any details on the latest infections, except to say they all had come into direct contact with the sick man who arrived by plane in Lagos late last month.

In Sierra Leone, some 750 soldiers deployed to the Ebola-ravaged east as part of “Operation Octopus,” aimed at enforcing quarantines of sick patients. In Spain, the Defense Ministry said a medically equipped plane was ready to fly to Liberia to bring back a Spanish missionary priest who has Ebola.

At the same time, Saudi officials reported a suspected Ebola death, underscoring the risk of the disease spreading by air travel even as many airlines curtail their flights to the most infected cities.

The revelation of more infections also came amid a public-sector doctors’ strike in Nigeria that began in early July. So far, health workers monitoring the latest Ebola patients are still on the job.

Nigeria is the fourth West African country to be hit by the Ebola outbreak since it first emerged in March in the remote tropical forests of Guinea. The disease then spread to neighboring Sierra Leona and Liberia before reaching Nigeria.

This article appeared in print on page 6 of the August 7th, 2014 edition of Hamodia.