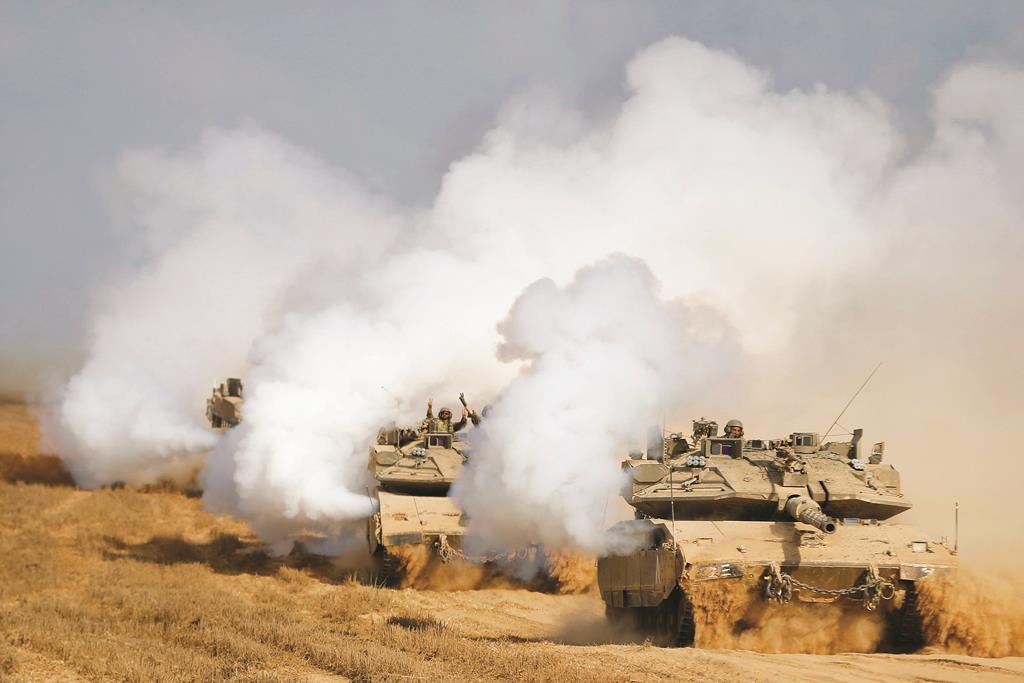 Merkava tank number 24534 that crossed the border from the Gaza Strip into Israel at 7:58 Tuesday morning was the last military vehicle to return into Israel as the latest ceasefire took effect.

The war in Gaza is officially over, and there is a momentary relief for many people who were at the front, their families, and throughout Israel. But observers noted that it’s only another round of hostilities between the sides that has been completed. Operation Protective Edge, which began 29 days ago, reached an end with a 72-hour ceasefire called by both sides, during which the indirect talks between the parties will take place in Cairo. There, the details of the “arrangement” will be worked out. Israel has already announced that it is preparing the delegation that will attend the negotiations, which are being overseen by the Egyptians and the Americans.

Although the sides declared a ceasefire for 72 hours, which will end on Friday morning, it is actually a full fledged truce since the moment it took effect, and all the sides have declared the war over.

Since the ceasefire took effect Tuesday morning and, as of midnight Tuesday night, no violations were reported. With that, Israel has not yet released the reserve soldiers that it called up for the operation, and they are camped out, right near Gaza, in the event the fire resumes.

Just a few hours before the last soldier left Gaza, the engineering corps completed blowing up the last tunnel, number 32, but the IDF says they are not sure that they located every last one. They have not ruled out the possibility that there are two or three tunnels remaining that were not discovered.

Missile fire continued Tuesday morning until a few minutes before the truce took effect at 8 a.m. Sirens sounded over and over again in the south and coastal plains regions Tuesday, and the missile that was fired the furthest distance Tuesday morning was aimed toward the Yerushalayim region, but was intercepted over Gush Etzion. Another missile fired in the same direction hit the top floor of a house in the town of Beit Sachur, south of Yerushalayim, near Beis Lechem. Shrapnel of the intercepted missile fell into the town of Alon Shvut. No one was injured, b’chasdei Shamayim.

These funds are in addition to the $176 million requested in the President’s FY 2015 budget for Iron Dome and the FY 2015 Congressional increase of $175 million proposed in Congress to offset the costs of initiating Iron Dome production in the United States.

In summation, the operation lasted 29 days; 64 soldiers and three civilians were killed; 322 soldiers and 670 civilians were injured. The air, land and sea units conducted 4,762 strikes on terror targets, and exposed and neutralized 32 terror tunnels.

A total of 3,356 missiles and RPGs were fired into Israel. Miraculously, most of them caused little or no damage. From the IDF spokesman’s report, 2,532 of the missiles fired into Israel exploded in open territory, 116 exploded in built-up areas, and 119 of them fell within the Gaza Strip. The Iron Dome intercepted 586 missiles that were headed for residential or built-up areas.

On the Gazan side, 4,762 terror targets were struck by Israeli aircraft, ships or artillery fire. Based on IDF figures, 1,768 residents were killed (and Israeli security sources estimate that some 900 of them were terrorists) and 9,300 were injured.

Some 2,500 homes in the Strip were completely destroyed and 18,000 more were damaged.