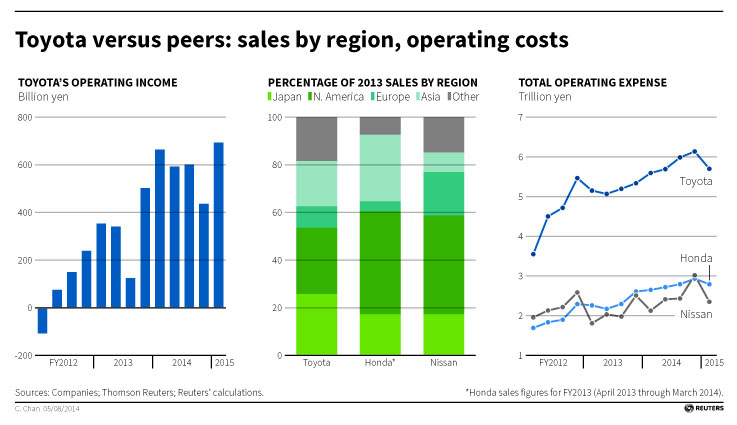 The Japanese automaker said Tuesday its net income rose 4.6 percent to 587.7 billion yen ($5.76 billion) for the quarter ended June 30 compared with the same period a year earlier. Revenue edged up 2 percent to 6.39 trillion yen ($62.6 billion.) It was the first quarter of Toyota’s fiscal year.

The world’s largest automaker — over second-ranked Volkswagen and then General Motors — did especially well in North America. Toyota said sales increased by 21,000 vehicles to 710,000 in the quarter. Its North American operating profit rose almost 45 percent to 149.7 billion yen ($1.46 billion) from the same period a year earlier.

The gain was driven by sales of the RAV4 crossover, the recently redesigned Corolla small sedan and other core models, the automaker said.

Toyota also said it planned to relocate the first group of employees from its U.S. sales office in Torrance, Calif., to its new North American corporate headquarters in Plano, Texas, in December. The automaker is shuttering the Torrance complex and moving 3,000 jobs to Texas over several years.

Sales also fell in Asia, in part because of political instability in Thailand, where there was a military coup in May.