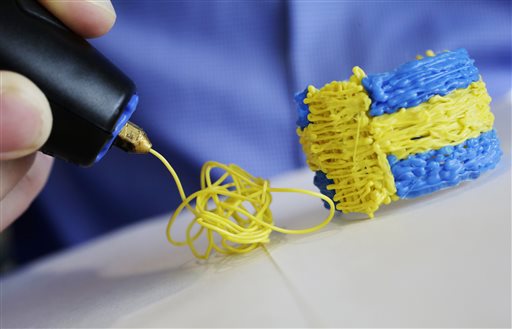 3-D printing is all the rage. You can hit a button on your computer, which sends a file to a printer, which produces a small 3-D object out of plastic. It’s a cool technology, but it’s not exactly a hands-on way to make things.

Enter the 3Doodler: the pen that turns you into the 3-D printer.

The $99 3Doodler, made by Boston-based startup Wobbleworks, is a fat pen not unlike a hot glue gun. It needs to be plugged into a wall outlet. A stick of plastic goes in on the blunt end and comes out, melted, at the tip. As you move your hand, it leaves a thin trail of cooling, solidifying plastic. Move it around with a plan, laying down string upon string, and an object starts taking shape.

It’s easy to get started. Within a few hours, I made a few rings, an unusable but cute eggcup, and a three-inch sculpture of a walking man. I made shoes for my daughter’s doll by coating the doll’s feet in plastic. They were popular until they broke a few minutes later.

The finished objects have a unique and intriguing look to them – they’re all reminiscent of a jumble of fused plastic wire. But it’s very hard to make anything durable or useful this way. The company behind the 3Doodle recommends making paper clips as one of the first exercises, and sure, you’ll have paper clips, but they’ll be the most fragile paper clips you’ve ever seen. Bending clips from steel wire would be a much better way to go, if you really need paper clips.

It’s fun to work with plastic, though. Plastic has, so far, not been a do-it-yourselfer’s material. You can whittle wood, machine metal and mold clay. But plastic, that near-ubiquitous material, has been out of reach. That’s a pity, because it’s pretty cute. It’s light, colorful and easy to shape. It’s too bad it’s so fragile.

There are two types of plastic available. Polylactide, or PLA, is made from corn and is biodegradable. It comes in several colors, including attractive translucent ones. I found it the easiest material to work with. Acrylonitrile butadiene styrene, or ABS, is opaque and more flexible. It’s more-easily recycled than PLA. It’s hard to work with, in part because the strands don’t stick that well to one another.

The plastic costs $10 for packs of 25 sticks. Each pack weighs about 1.5 ounces, or 40 grams. When bought in big rolls for 3-D printers, the same amount of plastic costs about $1, so 3Doodler’s markup is pretty hefty.

While 3-D printers for home and amateur use have gone through several cycles of improvement over the last five years or so, the 3Doodler is a first-generation product, and it shows. The speed of the plastic feed will vary, especially when you’ve fed in a fresh stick. When using ABS plastic, it stops frequently. This makes it difficult to build with precision. You can chose between “fast” and “slow” speeds, but even the slow one often feels too fast.

The pen can’t feed the last bit of the stick, so when the plastic stops coming out of the head and you insert a new stick, a dozen inches of plastic from the old stick comes out first. This makes it difficult to switch colors without waste – serious 3Doodlers will probably want more than one pen for multicolor projects.

I think these are fixable problems – the next generation of pens should be better. And while they’re at it, it would be great to get a few different extrusion heads – one that squeezes out square bars, and another that does flat bands.

In the 3Doodler’s favor, it’s a much simpler machine than a 3-D printer. I got a $1,000 printer from Solidoodle and didn’t manage to produce a single usable thing. There were at least three things wrong with the printer, and fixing all of them would require a major investment in time. If you’re buying a 3-D printer, you’re investing in a new hobby.

The 3Doodler, on the other hand, is a low-risk buy. It’s fun to play with, and – despite the markup on the plastic – a pretty good value, especially if you have kids or have an artistic sense. I did, eventually, figure out how to make a few things that were both useful and durable: a set of translucent napkin holders.