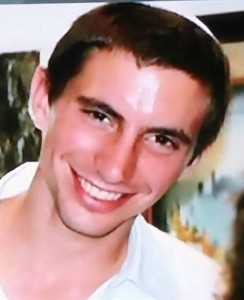 Some 20,000 people participated in the levayah of the abducted soldier, Hadar Goldin, Hy”d, Sunday afternoon. Jews around the world were davening for the safe return over Shabbos after he was reported kidnapped on Friday morning. Late on Motzoei Shabbos, the Military Rabbinate determined that he had fallen in battle.

The abduction occurred at 9:16 a.m. Friday morning. A Hamas terrorist wearing an explosives vest emerged from a nearby tunnel, and before the troops managed to shoot him, blew himself up. Sayeret Givati Major Benayah Sarel, 26, of Kiryat Arba, and Sgt. Liel Gidoni, 20, from Jerusalem, were killed instantly, Hy”d. The third member of this group was Hadar Goldin.

Heavy battles began when terrorists emerged from another tunnel, and during the exchange of fire Hamas terrorists managed to escape with Hadar Goldin, who at the time was apparently alive and able to move, bring him into a tunnel that led to a nearby mosque. This was subsequently bombed from the air so that the IDF could look for other tunnels and shafts below, which were not found

The levayah took place after the Military Rabbinate received and examined all the findings at the scene where Goldin fell, and inside the tunnel into which he was taken, and determined that what was found in the tunnel indicates halachically and legally that the soldier undoubtedly died in the incident and that he could be brought to kever Yisrael.

The levayah was also attended by Defense Minister Moshe Yaalon, who disclosed that he was a relative of the soldier, Hy”d.

Goldin was supposed to get married next month.

This article appeared in print on page 1 of the August 4th, 2014 edition of Hamodia.