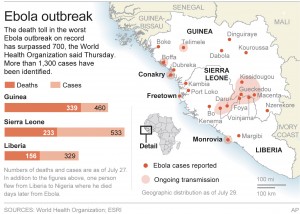 Security forces went house-to-house in Sierra Leone’s capital Thursday looking for Ebola patients and others exposed to the disease as the death toll from the worst recorded outbreak in history surpassed 700 in West Africa.

U.S. health officials urged Americans not to travel to the three countries hit by the medical crisis: Guinea, Sierra Leone and Liberia.

Almost half of the 57 new deaths reported by the World Health Organization occurred in Liberia, where two Americans, Dr. Kent Brantly of Texas and Nancy Writebol, a North Carolina-based missionary, are also sick with Ebola.

Writebol is in stable but serious condition and is receiving an experimental treatment that doctors hope will better address her condition, according to a statement released by SIM, a Christian missions organization. Her husband, David, is close by but can only visit his wife through a window or dressed in a haz-mat suit, the statement said.

“There was only enough [of the experimental serum] for one person. Dr. Brantly asked that it be given to Nancy Writebol,” said Franklin Graham, president of Samaritan’s Purse, another aid organization that has been working in Liberia during the Ebola crisis.

Brantly, who works for the aid group, did receive a unit of blood from a 14-year-old boy who had survived Ebola because of the doctor’s care, Graham said in a statement.

“The young boy and his family wanted to be able to help the doctor who saved his life,” he said.

Giving a survivor’s blood to a patient might be aimed at seeing whether any antibodies the survivor made to the virus could help someone else fight off the infection. This approach has been tried in previous Ebola outbreaks with mixed results.

No further details were provided on the experimental treatment. There is currently no licensed drug or vaccine for Ebola, and patients can only be given supportive care to keep them hydrated.

This article appeared in print on page 6 of the August 1st, 2014 edition of Hamodia.