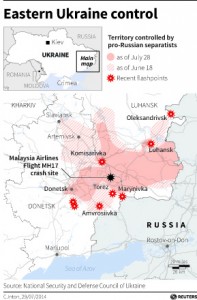 Spurred to action by the downing of the Malaysian airliner, the European Union approved dramatically tougher economic sanctions Tuesday against Russia, followed swiftly by a new round of U.S. penalties targeting key sectors of the Russian economy.

The coordinated sanctions were aimed at increasing pressure on Russian President Vladimir Putin to end his country’s support for separatists in eastern Ukraine whom the West blames for taking down the passenger jet nearly two weeks ago. President Barack Obama and U.S. allies also warned that Russia was building up troops and weaponry along its border with Ukraine.

“Today Russia is once again isolating itself from the international community, setting back decades of genuine progress,” Obama said. “It does not have to be this way. This a choice Russia and President Putin has made.”

Europe’s actions were particularly significant given that the continent has a far stronger economic relationship with Russia than the U.S. does. Until this week, the EU sanctions had lagged behind American penalties, in part because of leaders’ concerns about a negative impact on their own economies.

But Europe’s calculus shifted sharply after a surface-to-air missile brought down the passenger jet, killing nearly 300 people including more than 200 Europeans.

“When the violence created spirals out of control and leads to the killing of almost 300 innocent civilians in their flight from the Netherlands to Malaysia, the situation requires urgent and determined response,” the two top EU officials said in a statement.

Yet it remains uncertain whether the tougher penalties will have any impact on Russia’s actions in Ukraine; nor was it clear what other actions the U.S. and Europe were willing to take if the situations remains unchanged. U.S. officials said they believe economic pressure remains their most effective tool, and Obama reiterated his opposition to sending lethal aid to the Ukrainian military.

The new European penalties include an arms embargo on Moscow and a ban on the unapproved sale to the Russians of technology that has dual military and civilian uses or is particularly sensitive, such as advanced equipment used in deep-sea and Arctic oil drilling.

To restrict Russia’s access to Europe’s money markets, EU citizens and banks will be barred from purchasing certain bonds or stocks issued by state-owned Russian banks, according to EU officials.

The specific targets of the EU actions will be published Thursday, when they will take effect.

U.S. officials said they expected Europe’s list of targets to include some of the same energy companies, defense entities and financial institutions the Obama administration hit with sanctions the day before the Malaysian airliner was shot out of the sky. The White House has been pressing Europe in recent days to bring its penalties in line with the U.S., both to increase the economic pressure on Moscow and present a united Western front.

As part of that effort, Obama also announced an expansion of the U.S. sanctions on Russian economic sectors. Among the targets were three major Russian banks: the Bank of Moscow, Russian Agricultural Bank and VTB Bank, Russia’s second largest bank.

Administration officials said 30 percent of the Russian banking sector’s assets were now targeted by U.S. sanctions. The main function of the sanctions is to curtail the financial institutions’ ability to access U.S. debt markets, not to block individual users from using their accounts or credit cards, according to the officials.

The U.S. and European officials spoke on the condition of anonymity because they were not authorized to discuss the sanctions by name.

This article appeared in print on page 6 of the July 30th, 2014 edition of Hamodia.