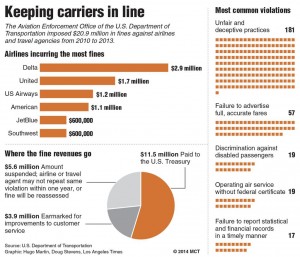 Sometimes, airfares are just too good to be true.

Southwest Airlines sent an online offer to about 10 million people in January 2013 for flights from Dallas to Branson, Mo., for a bargain price of $66. But fliers who tried to book the fares couldn’t find seats for the sale period – an error the airline blamed on a technical glitch.

Unfair and deceptive practices, such as promoting fares that don’t exist, are by far the most common violation of passenger rights by the nation’s airlines, according to three years of U.S. Department of Transportation citation records.

The Southwest violation was among more than 500 total citations – resulting in $20.9 million in fines – issued from 2010 to 2013 to all airlines and travel agencies, at a time when passengers were howling mad over new airline fees, cramped seating and mergers that cut service to smaller cities.

The most common citation for unfair and deceptive practices was a failure to disclose the full fare for a flight, including taxes.

The steepest penalties were imposed against airlines that mistreated disabled passengers.

Only about half the fines imposed by the Department of Transportation were collected, with the balance either suspended or directed to be used to improve airline services.

In response to an outcry from passengers, the Department of Transportation cracked down on violators and adopted new passenger-rights rules that took effect starting in 2010.

In addition to requirements to advertise full fares, the new rules impose hefty fines on airlines that strand passengers on the tarmac for hours. Airlines must also refund checked-bag fees for lost luggage and give customers bumped from overbooked flights compensation of as much as $1,300, up from the previous maximum of $800.

These new rules focus primarily on the treatment of passengers – not on safety or mechanical issues, which are regulated by the Federal Aviation Administration.

Although passenger-rights groups have welcomed the changes, some airline critics believe the new rules don’t go far enough and are calling for steeper fines to change the behavior of repeat violators.

“I don’t think these fines do anything to mitigate or stop the bad behavior,” said Albert Rizzi, a blind traveler who was kicked off a US Airways plane in November 2013 when a flight attendant complained that his service dog had wandered into the aisle. “There are no consequences involved.”

Of the 521 violations in 2010-13, the department cited airlines 181 times for violating rules of unfair and deceptive practices, such as Southwest’s nonexistent discount airfares to Branson, according to agency records.

In each violation, the airlines and travel agencies signed consent orders to settle the allegations of wrongdoing raised by the Department of Transportation to avoid civil litigation.

Ten months after Southwest was cited for promoting those fares, the department fined the airline $200,000 for running ads touting another super-low fare, from Atlanta, that did not exist – another error, according to the airline.

A rule requiring airlines to advertise the full cost of a flight took effect in January 2012. Since then, violations of the rule have led the federal agency to fine the nation’s airlines and travel agencies 57 times.

For example, American Airlines advertised in February 2013 that children fly “free” as part of a ski-resort package. But the fine print said only the airfare charges were free – travelers still had to pay taxes and fees.

American Airlines agreed to a $20,000 fine, but disputed that it had broken any rules.

Congress is now considering a bill, supported by most airlines, that would eliminate the full-fare rule, allowing airlines and travel agencies to advertise the fares and fees separately.

The heftiest fines – nearly four times higher than the average penalty – were issued to airlines that neglected or mistreated disabled passengers, according to federal records.

In one incident, at New York’s John F. Kennedy International Airport, a disabled 79-year-old woman said she was left unattended in a terminal for more than two hours because she declined to pay a Delta worker $10 to push her wheelchair.

Delta paid $750,000 of the total fine. The balance was credited to the airline for money it spent to improve services for disabled passengers, such as increasing employee training and investing in technology to ensure wheelchairs are provided to fliers who request them.

This article appeared in print in the July 30th, 2014 edition of Hamodia.