Stocks Flatten Out After Fed Delivers No Surprises 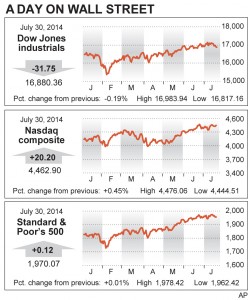 A cheerful report on the U.S. economy, rising profits and no surprises from the Federal Reserve left the stock market nearly where it started on Wednesday.

The news was nearly all good. The government said that the economy grew at a robust 4 percent annual rate this spring. Later in the day, the Federal Reserve did exactly what investors expected. It scaled back its support for the economy, while pledging to keep short term interest rates low “for a considerable time” after it stops buying bonds.

“Good news is getting to be bad news again,” said Jack Ablin, chief investment officer at BMO Private Bank, referring to the lack of enthusiasm among investors in the stock market. “The G.D.P. report is obviously good news, so why are stocks off? Because people are wondering when the party will come to an end.”

The Fed announced plans to make further cuts to its monthly bond purchases, a program launched after the financial crisis to encourage borrowing and spending. At the current pace of cutbacks, the Fed’s bond purchases will end in October.

Most economists expect that the Fed could start raising rates next year as the economy improves.

A strong report on the economy is always good news for the stock market over the long haul, said Darrell Cronk, Deputy Chief Investment Officer for Wells Fargo Wealth Management. In the near term, though, investors are bound to weigh any good news against a possible interest-rate move from the Federal Reserve.

“I’d love to get back to where what matters most for the market is the economy not what the latest read is on the Fed,” Cronk said.

Investors were also following the parade of big companies turning in their second-quarter results. The reports out Wednesday presented a mixed picture. Sliding sales for Goodyear Tire & Rubber knocked its stock down $2.14, or 8 percent, to $25.45.

Twitter’s stronger revenue sent its stock up 20 percent Wednesday. The company reported a quarterly loss late Tuesday but its revenue more than doubled over the year, thanks to new advertising tools and a surge in traffic from soccer fans following the World Cup. Twitter’s stock surged $7.71 to $46.30.

Amgen said Tuesday that it plans to lay off up to 15 percent of its worldwide workforce and close four sites, even as it reported second-quarter results that trounced Wall Street expectations. The drugmaker also raised its forecasts for its 2014 profit and sales. Amgen’s stock climbed $6.70, or 5 percent, to $130.01.

Overall, earnings at U.S. companies have been better than many expected. More than half of the companies in the S&P 500 have reported results for the second quarter, and seven out of 10 have posted higher profits than analysts projected, according to S&P Capital IQ.

In energy trading, the price of oil fell as inventories of gasoline and diesel continued to build. Benchmark U.S. crude fell 70 cents to close at $100.27 a barrel. Brent crude, a benchmark for international oils used by many U.S. refineries, fell $1.21 to close at $106.51 on the ICE Futures exchange in London. Wholesale gasoline fell 2.9 cents to close at $2.816 a gallon in New York. 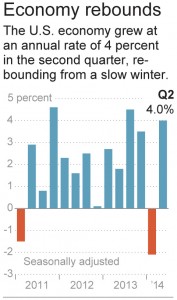 This article appeared in print on page 12 of the July 31st, 2014 edition of Hamodia.