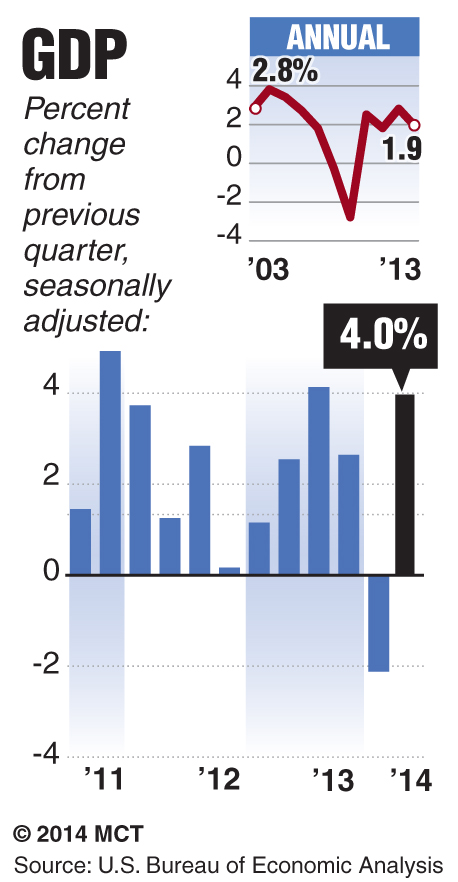 The U.S. economy rebounded strongly in the second quarter after a winter contraction, expanding at a 4 percent annual rate, the Commerce Department said Wednesday.

Analysts had projected the nation’s total economic output, or gross domestic product, to expand at a 3.1 percent rate in the second quarter. But the economy performed better than expected, with growth in the April-May period the best since the third quarter of last year.

“Some of the past quarter’s growth performance reflects a catch-up from the dismal first-quarter performance,” said Gad Levanon, director of macroeconomic and labor-market research at the Conference Board.

“But this stellar growth figure also suggests that the economy has gained some momentum and could hold on to this newfound dynamism through the second half of 2014,” he said.

Growth was boosted by a jump in consumer spending, which rose 2.5 percent, compared with 1.2 percent in the first quarter, the Commerce Department said.

The 4 percent annual growth in the second quarter is the Commerce Department’s first estimate and could change with more data.

Bitter cold and heavy snow in much of the nation caused the economy to contract at a 2.1 percent annual rate in the first quarter. The Commerce Department revised the figure on Thursday, after reporting a 2.9 percent contraction last month.

That was just the second quarter since the Great Recession ended five years ago that the economy shrank. The economy had expanded at a 2.8 percent annual rate in the fourth quarter.

Economists had attributed the first-quarter contraction largely to the bad weather and expected a turnaround would begin in the spring.

Last week, the International Monetary Fund projected that the U.S. economy would expand at a 3 percent to 3.5 percent annual rate the rest of the year.

But the first quarter’s poor performance still would drag down overall growth for the year to a disappointing 1.7 percent, the worst since the recession ended in 2009, the IMF said.

Also Wednesday, payroll firm Automatic Data Processing said the private sector added 218,000 net new jobs in July. That was down from 281,000 in June and below analyst estimates, but still represents strong growth.

On Friday, the Labor Department is expected to report that the overall U.S. economy added about 233,000 net new jobs in July.

Such growth would be down from 288,000 net new jobs in June, but it would mark the sixth straight month the economy has added more than 200,000 new jobs. The last time that happened was in 1997.