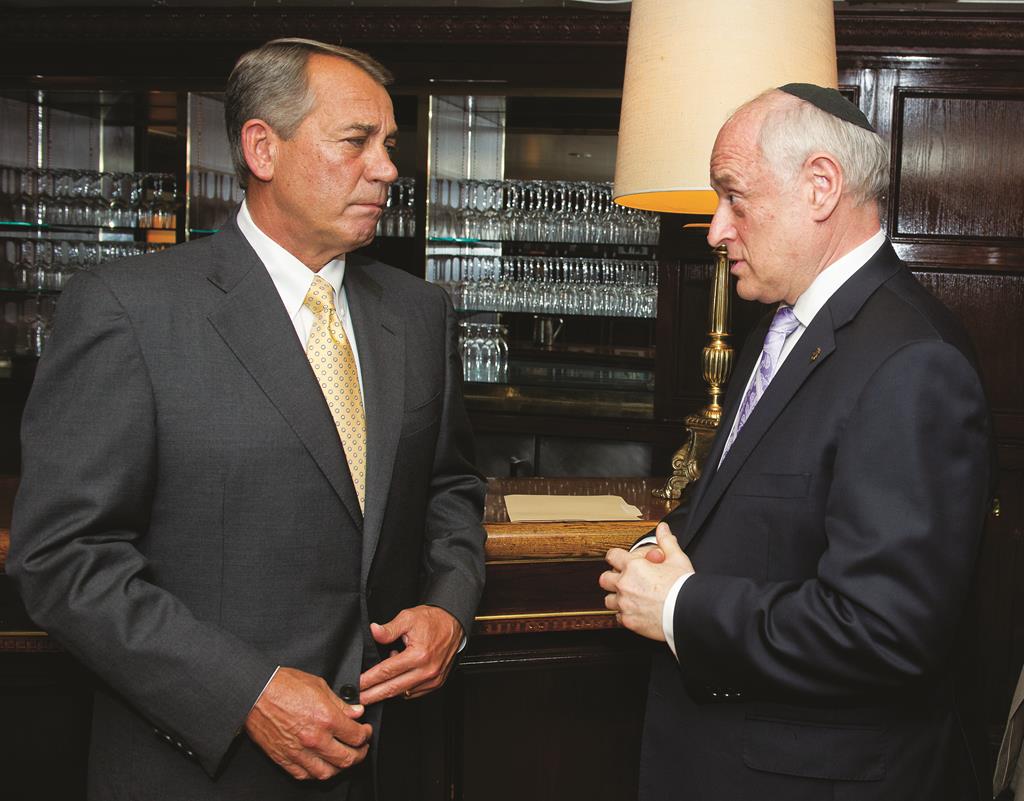 Republicans emphasized their support for Israel’s fight against Hamas while Democrats highlighted their efforts to fund the Iron Dome missile defense system and to ward off calls for investigating the Jewish state.

But the speakers’ roster at a solidarity event at the National Press Club in Washington Monday shows how Israel continues to be one of a dwindling list of issues that unites Washington.

The Republican leader of the House and a top aide to Democratic President Barack Obama declared their allegiance to Israel’s security, while fending off criticism leveled at Secretary of State John Kerry by some Israeli commentators for his call for an unconditional ceasefire.

“We are here to stand with Israel,” House Speaker John Boehner said. “Not just as a broker or observer, but as a strong partner and a trusted ally. It doesn’t mean issuing vague, on-the-one-hand, on-the-other-hand statements. No, it means backing up our words, and showing solidarity with our friend.”

Hundreds of Jewish group heads listened as top administration and congressional leaders avowed their backing for Israel, with Congress promising a resolution by the end of this week.

“We will not equate professional militaries with terrorist organizations that use human shields as they seek maximum civilian casualties,” Boehner said. “America must send this clear, public and united message: Israel is our friend, and Israel’s enemies are our enemies. And as long as I am Speaker of the House, I give you my word this will be our cause.”

“I must tell you: we’ve been dismayed by some press reports in Israel mischaracterizing his efforts last week to achieve a ceasefire,” Rice said. “The reality is that John Kerry, on behalf of the United States, has been working every step of the way with Israel.”

Times of Israel editor David Horovitz has termed Kerry’s proposal as one that “empowers the Gaza terrorist government bent on destroying Israel.” And Ari Shavit wrote in Haaretz that “Kerry ruined everything. Very senior officials in Jerusalem described the proposal that Kerry put on the table as a ‘strategic terrorist attack.’”

But Israel’s ambassador to the U.S., Ron Dermer, said that his country’s leadership does not share those views.

“I speak directly for my prime minister here,” he said. “The criticism of Secretary Kerry for his good faith efforts to advance a sustainable ceasefire is unwarranted.”

Rice highlighted the U.S. endeavor to keep Israel out of global isolation, implying that United Nations criticism of Operation Protective Edge may have anti-Semitic undertones.

“When countries single out Israel for unfair treatment at the U.N., it isn’t just a problem for Israel, it is a problem for all of us,” Rice said. “No country is immune from criticism, nor should it be. But when that criticism takes the form of singling out just one country, unfairly, bitterly and relentlessly, over and over and over, that is just wrong — and we all know it.”

Rice decried the U.N. call for an inquiry into Palestinian claims of civilian deaths as “one-sided.”

“The United States stood with Israel, and said ‘no,’” she declared. “We were the lone vote in the human rights council. Even our closest friends on the council abstained. It was 29 to one. But the one, as usual, was America. That is what we mean when we say: you are not alone.”

Malcolm Hoenlein, executive vice president of the Conference, said he was surprised to see such heavy hitters, considering that the event was arranged in a few short days and on a Monday, when many congress members were in their home states.

“A lot of these people came in special for it,” he told Hamodia on Tuesday. “We were really pleasantly surprised.”

“From across the political spectrum, the leadership came together to express their solidarity with Israel — with no question marks and no equivocation, just clear statements of support and pledges of action from funding Iron Dome and the issue of [Hamas using] human shields — real tachlis issues,” he said.

Hoenlein added that from Rice’s presentation, it was clear the Obama administration took the gathering seriously.

“It wasn’t just a compilation of previous comments but something that was specifically written for the occasion,” he said. “And Ron Dermer also used the occasion to rectify what was a growing tension — I think it was diffused by the event without compromising on the seriousness of the situation.”