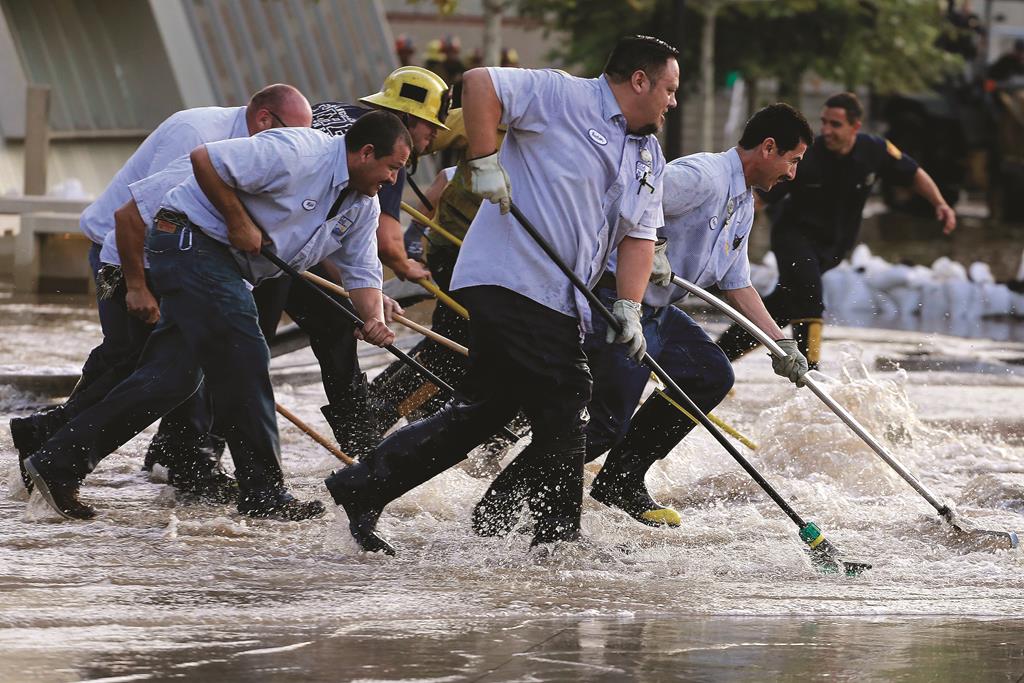 Utility crews working around the clock on Wednesday labored to clean up and repair damage from a major water main break that unleashed a 40-foot-tall geyser and flooded part of the University of California campus in drought-stricken Los Angeles.

The late-afternoon rupture on Tuesday beneath Sunset Boulevard, a key thoroughfare on the city’s west side, opened a gaping sinkhole in the street and sent an estimated 8 million to 10 million gallons of water gushing across the north end of the UCLA campus for several hours.

It took crews from the Department of Water and Power (DWP) until 7 p.m. to halt most of the water flow, though shutoff valves were still stuck partially open and water continued to drain into the work area as of Wednesday morning, slowing repair efforts, DWP officials said.

Firefighters dispatched to the scene helped five people to safety on Tuesday as water poured into the garage buildings, and no injuries were reported.

The 93-year-old riveted steel pipe, 30 inches in diameter, normally carries an estimated 75,000 gallons of water per minute from a reservoir to L.A.’s Westwood neighborhood and appears to have broken at the junction of another water trunk line, the utility said.

The rupture underscored the aging condition of much of the city’s infrastructure. The DWP predicted in 2012 that 1.4 million feet of its water delivery pipeline, or 27 percent of the total, would be at least a century old by this year, according to the Los Angeles Times.

The mishap occurred as California suffers through a record drought that has prompted state and local authorities to impose strict water conservation measures, including fines for wasting even a few gallons on excessive lawn irrigation.