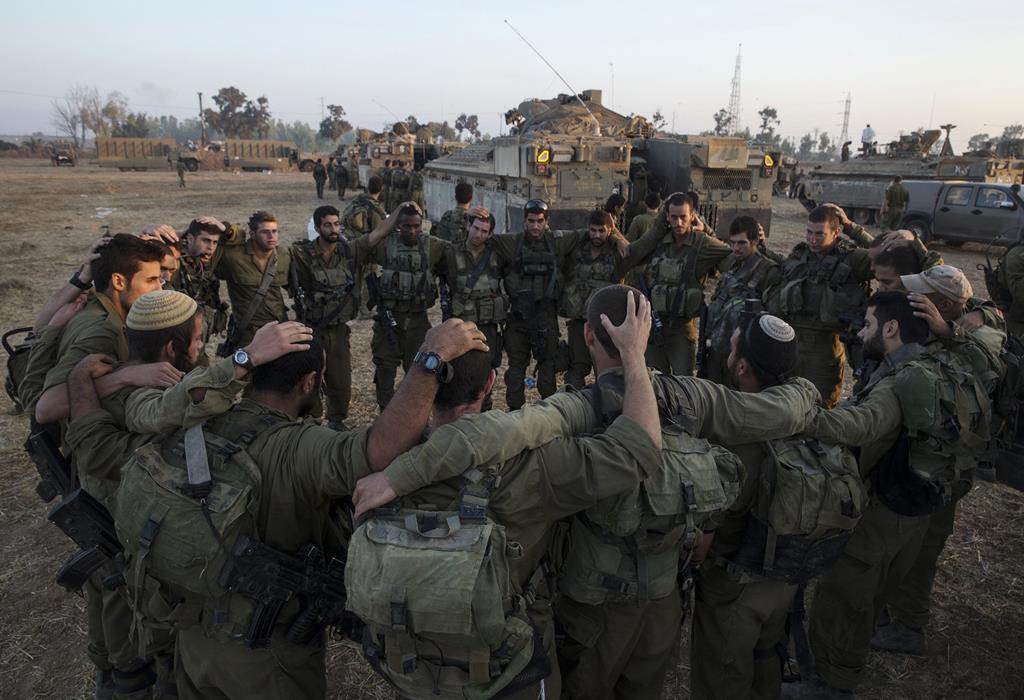 Operation Protective Edge marked the end of its 23rd day yesterday and yet, despite the many deliberations and debates and the constant search for a path to end the conflict with an agreement, no one knows as of last night if this operation will end today or if it will continue for many days ahead. In the meantime, the security cabinet met in Tel Aviv and decided that as long as there is no other decision, the army will expand its area of operations and will increase the intensity of air strikes. Concurrently, IDF soldiers are continuing their tunnel-neutralizing activities wherever they can.

Yesterday was another bloody day, with numerous casualties. Three soldiers from the elite Maglan paratroopers unit were killed when a tunnel opening exploded inside a building that Hamas had rigged with explosives in the Gaza Strip. Many other soldiers were injured. The number of rockets fired into Israel returned to its levels from last week, around 100 a day.

In the IDF, criticism is mounting against the political echelons; the IDF says that the government is imposing on the army very difficult criteria and legal limitations that prevent them from destroying homes like the one that exploded yesterday. If the house would have been bombarded from the air, it would have been possible to save those soldiers, army sources claim.

Hamodia’s reporter notes that the diplomatic dialogue picked up speed last night, as Israeli and Palestinian representatives met last night in Cairo, mediated by representatives of President El-Sisi, to discuss the possibility of a ceasefire. The Israeli delegation was led by GSS head Yoram Cohen.

Meanwhile, the IDF is increasing its air strikes, and those in Gaza say that yesterday saw the heaviest bombardment since the operation began.

“We are just a few days away from destroying the tunnels we knew about before the operation,” Chief of the Southern Command General Sammy Turgeman told reporters. “We face significant challenges, but there is progress every day.”

According to Turgeman, this is a high intensity war in dense, built up areas that include mosques, making it a complicated challenge. “There are tunnels located dozens of meters deep in the ground. What I see on my visits are determined commanders and professional soldiers. The mission is to destroy the tunnel infrastructure. Four more tunnels were destroyed in the last 24 hours,” he told reporters.

The cement that has been used for tunnels would have been enough to build two hospitals, dozens of clinics, 20 schools or 100 kindergartens. Turgeman noted that four years of Hamas work has been destroyed in less than two weeks by the IDF.

Hamas leadership is hiding in apartments and sensitive locations such as basements of hospitals, Turgeman noted.

“Yesterday, we expanded the operation in the central and southern Gaza Strip so that wherever we see tunnels and Hamas terrorists, we are active.

“There are no forces stationed in the area that don’t have what to do. Wherever we attacked the enemy, we struck them down. We are using all the tools at our disposal, together with the air force. The coordination and synchronization work very well.

“What we see is stubborn fighting; the terrorists are taking advantage of their underground expanse, and are rigging houses and UNRWA clinics with explosives and are utilizing all the infrastructure they have,” Turgeman said.

The most difficult incident yesterday took place in Khan Younis, in the southern part of the Strip, when a large group of Maglan elite troops entered a house which, according to the intelligence information they had, had a tunnel entrance inside, and was not rigged with explosives. But suddenly, after the soldiers found the opening, the terrorists remotely detonated dozens of explosive devices that had been placed in every corner, and the house collapsed on the soldiers. Three of them died and 17 more were injured. Three are in serious condition, several are in moderate condition and the rest were lightly injured.

The IDF spokesman Brig.-General Motty Almoz discussed the incident in which the three soldiers died.

“Hamas sees the tunnels collapsing one after another in front of their eyes, and they have an entire network of hundreds of explosive-rigged houses. There are also incidents with casualties. We are embracing the families and send our best wishes to the injured,” he said.

“We are working to liberate the residents of the Gaza Envelope region from a very significant threat that they have been under in recent years. We will leave when we damage most of the tunnels, and even if we do not know about some of those tunnels now, the IDF will remain there and is not going anywhere. We are deployed on all the borders of the country. The cabinet decision enables the IDF to act as necessary and to expand the operation in accordance with the intelligence and assessments that they receive from the field.”

Almoz added that Hamas is continuing to “cynically use civilians.” He revealed that the IDF tried to send trucks of medication through the Kerem Shalom crossing as a humanitarian gesture, but Hamas rejected the deliveries. “The government liaison with the territories had offered services in the field hospital to treat the injured and Hamas refuses to accept any of it. That is part of their modus operandi, to put civilians in the center of fighting areas. It goes along with firing from institutions operated by international organizations. The IDF will not put its soldiers in danger,” he stressed.

“We regret any harm to uninvolved civilians who are in the fighting zone, sometimes against their will and by order of Hamas,” Almoz concluded.

Yesterday, the IDF declared a four- hour humanitarian ceasefire and stopped artillery and air strikes, although it continued searching for and destroying tunnels. Hamas did not accept Israel’s declaration and continued to fire missiles into Israel throughout the four hours, and at the same time, instigated clashes with soldiers operating in the field.

The Israeli announcement about the humanitarian ceasefire was in acquiescence to a United Nations request, and was a willingness to enable Gazans to stock up on food and water. But Hamas immediately declared the announcement Israeli psychological warfare, and said that no one on Hamas’s side had asked for the ceasefire nor would they abide by it.

At about 3:30, half an hour after the ceasefire took effect, sirens sounded in Ashdod, Ashkelon and the Gaza Envelope towns. Numerous missiles were fired, and four RPGs exploded right after that in the Eshkol region. It was clear to everyone that there was no slowdown in the fighting.

Throughout the day Wednesday there were numerous clashes and extensive firing. For example, a force of soldiers from the Givati Brigade discovered five terrorists emerging from a tunnel inside Gaza. They opened fire at the terrorists and killed all five. B’chasdei Hashem, none of the soldiers were injured.

The dead terrorists were found to be carrying pistols, machine guns, hand grenades, explosives, knives and many bullets.

In the morning, a Givati force along with engineering corps soldiers spotted a cell of 10 terrorists launching an anti-tank missile at them. Two soldiers were lightly injured. An Israel Air Force plane was summoned, it identified the cell, which had split up, and fired; all 10 were killed.

In addition, the air force struck down five terrorists, two of whom were seen placing an explosive device in the southern Gaza Strip.

Throughout the day, the air force struck 140 terror targets, among them a tunnel and a weapons factory.

Terrorists also fired at a D9 Israeli tractor that was uncovering a tunnel. The security forces returned fire and killed the terrorists.

Over the past 24 hours, the IDF blew up five tunnels, bringing the total number of neutralized tunnels to 32. Since the beginning of the operation, 4,121 terror targets have been hit.

Since the beginning of the ground operation, 1,171 missiles have been fired into Israel, 125 of which yesterday. The Iron Dome intercepted 215 of them, six just yesterday.

Gazans reported dozens of dead yesterday, including a journalist; more than 200 were injured, many of them in a strike that they claim Israel carried out in the marketplace in Saajaiya. The Palestinians also say that 70 of their people were injured in an IAF air strike on a target near a mosque in the Zeituon neighborhood.