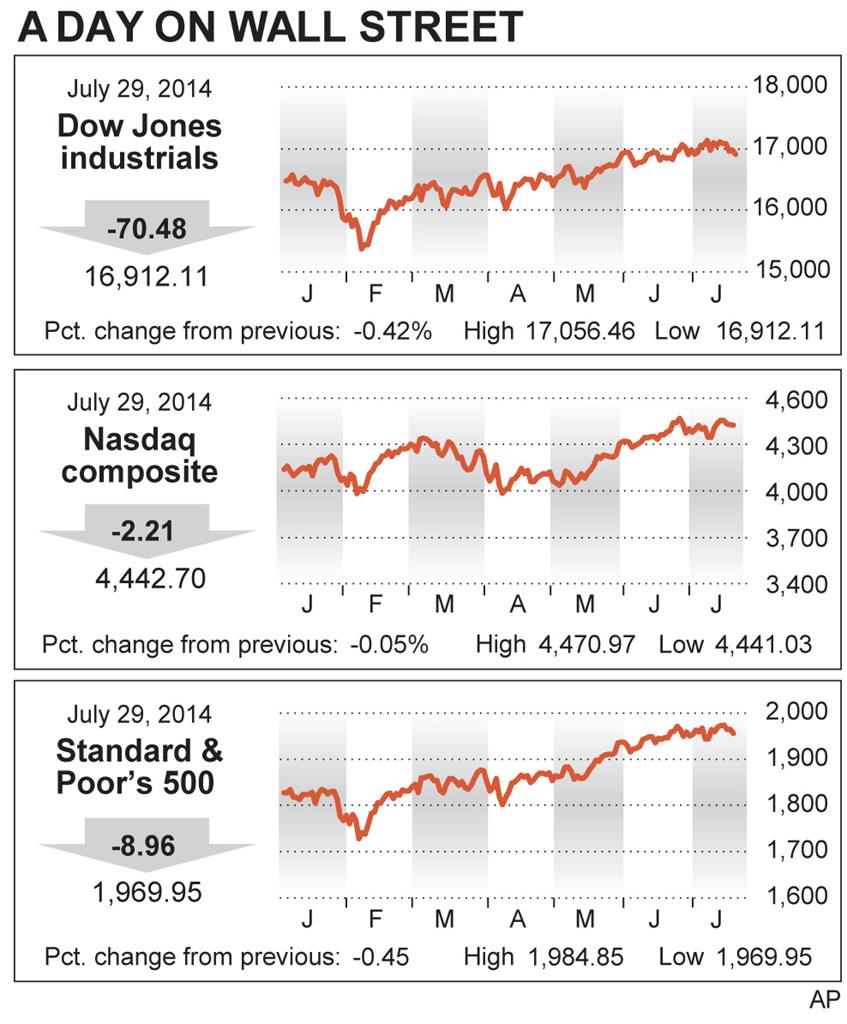 The stock market fell modestly on Tuesday as investors waited for a batch of big economic reports later this week.

On Wednesday, the government releases its look at economic growth in the spring quarter and the Federal Reserve finishes a two-day meeting. The next day, a report on China’s manufacturing industry will give investors an update on the health of the world’s factory floor.

For U.S. investors, the key news comes Friday, when the Labor Department releases its monthly report on the jobs market.

With traders cautious ahead of these reports, the market has drifted.

“So far, it seems like this week is about waiting for later this week,” said Bill Stone, chief investment strategist at PNC Asset Management Group.

Stocks spent most of Tuesday wandering around the start line. Major indexes crept higher in the morning, following news that a gauge of consumer confidence hit its highest level in nearly seven years. Major indexes turned flat by midday then slid to a loss in the last hours of trading.

Telecoms were the only one of the 10 industry groups in the S&P 500 to rise as traders plowed into a range of telephone and cable stocks, including AT&T and Verizon. The moves came after Windstream Holdings announced plans to move some of its network into a trust that won’t pay income tax. Windstream’s stock jumped $1.30, or 12 percent, to $11.83.

This week marks the half-way point for second-quarter earnings, and the overall results look solid. Earnings are on track to climb 8.8 percent over the year. At the start of the earnings season, analysts predicted an increase of 6 percent.

Among the heavyweights turning in results Tuesday, Merck reported a large sale and a tax benefit that helped it more than double second-quarter earnings, easily topping Wall Street’s expectations. The drugmaker also raised its profit forecast for 2014. Its stock climbed 61 cents, or 1 percent, to $58.58.

A warning of lower profits from United Parcel Service knocked its stock down. UPS said spending on technology to improve its service during the upcoming holiday season will take a cut out of its full-year earnings. The shipping company also said its second-quarter earnings fell 58 percent, though shipments and sales picked up. UPS sank $3.80, or 4 percent, to $98.86.

Twitter rose sharply after regular trading ended on Tuesday. The short messaging service reported that its revenue more than doubled in the second quarter. Twitter rose $11.32, or 30 percent, to $49.91.

Even with earnings coming in, traders are mostly biding their time until the economic news hits.

“In the next three days we’re going to get so much information on the state of the economy,” said Jim Paulsen, chief investment strategist at Wells Capital Management. “It could change the landscape under our feet.”

The price of oil fell on concerns about the strength of demand for oil and gasoline in the U.S., ahead of the weekly report on supplies from the Energy Department. Benchmark U.S. crude slipped 70 cents to $100.97 a barrel on the New York Mercantile Exchange.