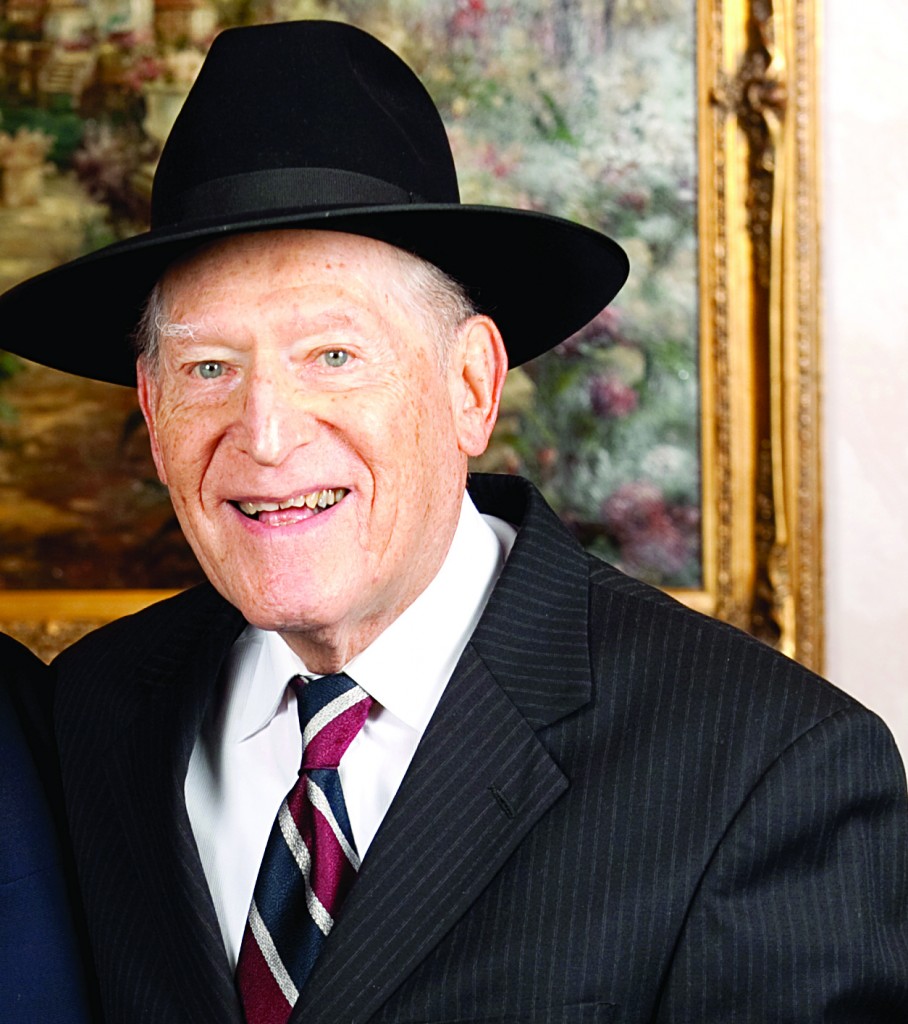 Edwin (Nechemiah Moshe) Shafier was a man who epitomized humility,dignity and dedication to what was right.

Mr. Shafier was born in Berlin in 1922. Germany — Berlin in particular — was then the center of European enlightenment, a movement that profoundly affected a large percentage of the city’s Jewish community. Like most German Jews of the time, his home was not particularly observant. However, his mother, desiring that her son receive a Jewish education, took the trolley with him every day to the other side of the city, so that he could attend a Jewish school. From the moment he began school, he took every word he learned to heart, and essentially became a baal teshuvah from the age of six.

He was drawn to strengthen his observance and live the life of a pious Jew, despite opposition from the culture around him, and despite growing up in a non-observant home. Consistent with his personality, once deciding that something was Truth, nothing would bend him from it. His decision would shape his own life —  and those of generations.

After he and his father were attacked on Kristallnacht, the family decided to leave Germany and, in 1939, immigrated to England. First placed in an internment camp, Edwin went to great lengths to obtain kosher food, amidst a group of mostly non-religious campmates. After his release, he supported the war effort by working in a battery factory.

Shortly after World War II, he moved with his parents to New York and in 1957 married Isabel Herzberg. Shortly after their marriage, the Shafiers settled in Kew Gardens Hills, where they raised their two sons, Larry and Ben Tzion. There, Mr. Shafier forged a strong relationship with Rabbi Fabian Schonfeld, the Rav of the Young Israel of Kew Gardens Hills — a bond he would cherish all his life. If the honor that he bestowed on ordinary people was great, how much more so his approach towards Rabbi Schonfeld. In his estimation, Rabbi Schonfeld’s word came second only to G-d’s (and maybe the Rambam’s).

When Mr. Shafier’s mother fell ill, it eventually became clear that he could no longer care for her properly at home. Rabbi Ben Tzion Shafier recalls that the only time he witnessed his father cry was when Mr. Shafier was faced with the decision to place his mother in a nursing home. Despite his strong feelings for his mother’s kavod, as soon as Rabbi Schonfeld told him that this was the right thing to do, he did it without question.

Following his wife’s passing in 1996, he married Mrs. Pearl Kronenberg, shetichyeh. In the last few years of their marriage, they resided in Deerfield Beach, Florida, where they cared for each other with extreme devotion. Their marriage, though later in life, had all of the care and tenderness of a vibrant young couple, and Rabbi Shafier views their marriage as a model of the ideal relationship when counseling young couples.

Mr. Shafier was incredibly consistent in all areas. His children humorously recall that he ate Swiss cheese on rye bread with mustard for lunch every day for over 20 years — he enjoyed it, so why should he change things? Always dependable, he arrived to shul and work daily, and on time.

If something was right, he performed it with full dedication anddetermination, in a timely and respectable manner. The gabbai of his shul in Deerfield Beach relates that for 14 years, anytime Mr. Shafier had an Aliyah or Mi shebeirach, he would make sure to give a donation. Many people didn’t do this, but Mr. Shafier felt it was the right thing to do — and he did it. Knowledge, too, was something he valued, sought out, and respected. He read the newspaper daily, not as an act of entertainment, but out of a true desire to understand anything that was important about the world.

Mr. Shafier’s humility defined his whole existence. His son, Rabbi Ben Tzion Shafier, recalled that when he would call his father Erev Yom Kippur to ask mechilah, he could never get more than a few words in before his father would gently stop him, saying, “It’s enough already.” The idea that he should be offended by someone else was foreign to him, as he genuinely felt, “Who am I to hold highly of myself?”

Another of Mr. Shafier’s hallmarks was his recognition of the tzelem Elokim in all of Hashem’s creations. Even the simplest of people and situations were given a sense of dignity by his gentle manner. For him, not speaking lashon hara was not an exercise in frumkeit, but a natural result of his own humility and appreciation for others’ dignity, always thinking, “Who am I to judge another person?”

Humility and sophistication are a rare combination of traits; however, Edwin Shafier epitomized these qualities, and exhibited them to an incredible degree. He lent dignity to every situation, and yet his greatness lay in his humble simplicity. Fusing absolute honesty with Torah u’mitzvos, he stood for what is right and true, and withstood the social pressures of a superficial world.

He is survived, ybl”c, by his wife, Mrs. Pearl Shafier, and sons Larry and Ben-Tzion, as well as many grandchildren and great-grandchildren.

May his memory serve as an inspiration to us all, as he personified what it means to be a true mentch and humble eved Hashem.