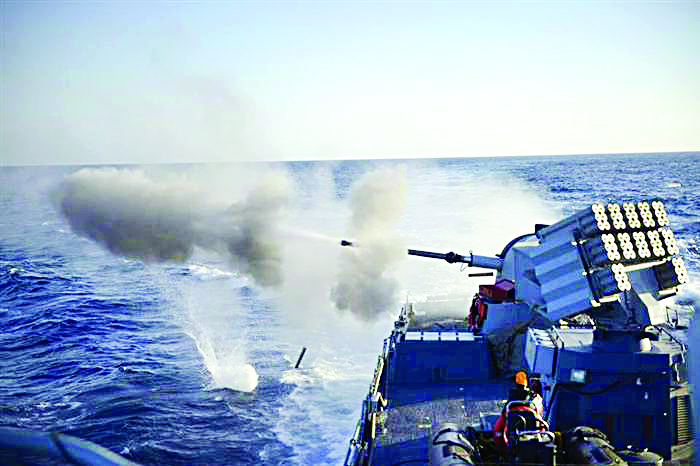 The navy has been preparing for a potential scenario under which terror organizations in the Gaza Strip have land-to-sea missiles at their disposal. In order to deal with this threat, Israeli naval ships are outfitted with a unique protection system, the Barak.

The system has been dubbed the “Iron Dome of the sea” because it operates similarly to the Iron Dome, and uses the same technological base. “The system was brought into use long before the land Iron Dome, in the 1990s, and it served as the basis for the development of its land-based counterpart,” the officer in charge of the naval ships, Lieutenant Y., said.

“The system classifies an area around the ship in which it detects any aerial threat — and these threats are quickly intercepted by the system,” he explains. He says the system is effective against various threats, including sea-to-sea missiles, land-to-sea missiles and aerial attacks.

“In order to protect the ship in the most effective manner, the system has to be updated frequently. It changes and develops in accordance with the changes in the field, and it knows how to meet the challenges of new threats,” Lieutenant Y. says. “We’ve conducted the necessary improvements every time we have needed to, even in the past two years.” He added that the “rate of success of the system is very high and we are satisfied with it.”

“Because of the system, we can execute missions in all zones, even in places where we know that there are threats that can hit us,” the IDF says.

While the ground army is combing the Gaza Strip for underground tunnels, the navy is focusing against a similar threat — sea tunnels. Just like there are tunnels inland, the sea tunnel can enable the terrorist to enter in the Gaza Strip and to gain access to Israeli territory. “We are waging a long-standing battle against the Hamas naval unit, which also dispatches the commandos we saw in the failed infiltration attempt on the Zikim beach. We have to disable them, from the commander to the last of the soldiers,” the officer emphasizes.

All of the Navy’s various ships are involved in these operations. “You wouldn’t have heard about a raid conducted by the naval units if soldiers wouldn’t have been injured. There were other such operations in Operation Protective Edge, which have remained covert,” the officer notes. “The soldiers were lightly injured, mostly from improvised explosive devices thrown at them,” he added.

The navy has greatly enhanced the army’s ability in the Gaza Strip, and ships have destroyed 76 targets during this operation.

Anther advantage of the naval ships is that they can maintain the element of surprise, as there is no advance notice of when they will strike a target.