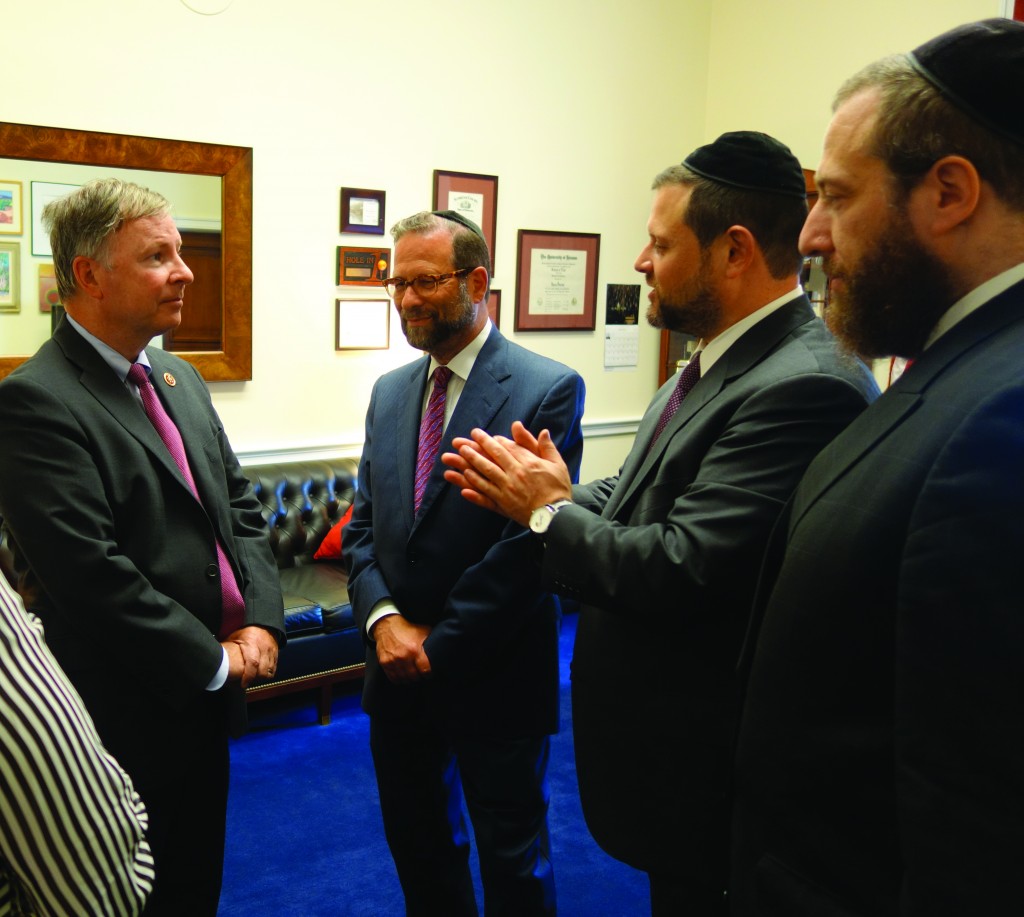 There is obviously reason for concern that a vicious storm is brewing for acheinu Bnei Yisrael, one that poses more than just an imminent physical threat — but a threat to the long-term stability of Jewish communities across the globe.

After disseminating the call of the Moetzes Gedolei HaTorah of America that we strengthen our tefillos to Hashem, Agudath Israel of America organized a delegation yesterday to Washington, D.C., to express appreciation for America’s strong support of Israel and its right to defend itself, and to request additional emergency funding of the Iron Dome. In addition, the delegation registered the community’s deep concern about the rise in global anti-Semitism and urged the officials to speak out forcefully about protecting Jewish communities across the globe.

Nearly 30 Agudath Israel activists from seven states converged on the U.S. Capitol, holding a series of meetings with key Senators and Congressional members from both parties. Although arranged with less than two days of advanced planning, the activists arrived from the Northeast and Midwest with a burning sense of mission. The delegation included a cross section of both veteran Agudath Israel askanim as well as younger members determined to share the Jewish community’s concerns in the halls of power.

Rabbi Abba Cohen, Agudath Israel’s vice president for federal affairs and director of the organization’s Washington Office, says that they found very receptive ears across the board. “Every officeholder told us unequivocally that fighting anti-Semitism is a bipartisan issue, and they are dedicated to do everything in their power on behalf of the cause,” he relates.

The mission targeted key members of the Senate Foreign Relations Committee and the House Foreign Affairs Committee, whose portfolios encompass not only Israel and the Middle East, but also human rights, terrorism and other matters on the global scene.

A 25-year-veteran of Jewish communal advocacy in the nation’s capital, Rabbi Cohen says that he was enormously impressed at how the lawmakers received tthe  message delivered by the Agudath Israel delegates. “There was a tremendous amount of congeniality and expressions of shared values,” he observes. “Most importantly, the urgency of our message resonated with them, loud and clear.”

The lawmakers, many of whom have few Jewish constituents, were not only receptive to the delegation’s ideas; many of them proactively suggested concrete steps to be taken. Agudath Israel leaders will remain in close contact with these elected representatives in the days and weeks ahead to follow through on these suggestions.

To underscore the urgency of the issue, over 100 Agudath Israel leaders participated this morning in a special briefing with the State Department’s Special Envoy to Monitor and Combat Anti-Semitism, the Honorable Ira N. Forman. Mr. Forman spent 40 minutes on the phone discussing the recent spate of anti-Semitic incidents in cities around the world, and fielded a number of questions from the participants.

Shlomo Werdiger, Agudath Israel’s Chairman of the Board of Trustees, said, “We thank the delegates for being true to the legendary mission of Agudath Israel, of standing up and speaking up for the individual and the broader klal.”