After Much Movement, Stocks End Where They Began 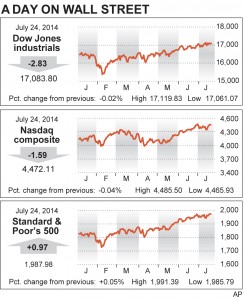 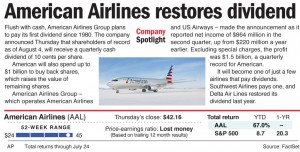 Only Wall Street could make the buying and selling of more than 3 billion shares look like nothing happened.

Major U.S. stock indexes ended roughly where they began Thursday, despite investors having to work through a busy day of corporate earnings and two economic reports.

Underneath the flat surface, there was a lot of movement in individual companies. “It’s a stock-specific market right now,” said Ryan Larson, head of equity trading at RBC Global Asset Management.

Facebook rose $3.69 to $74.98 after announcing a profit that trounced investors’ expectations. The company reported an adjusted profit of 42 cents per share versus the 33 cents analysts were looking for, according to a poll by Zacks Investment Research. Mobile advertising, a crucial business for the world’s largest social media company, saw major growth.

Dow member Caterpillar fell $3.34 to $105.04, making it the biggest decliner among the 30 companies that make up the average. The equipment maker’s quarterly revenue fell short of forecasts.

Another industry that got a lot of attention was autos. Ford rose 6 cents, or 0.3 percent, to $17.84 after reporting a 6 percent increase in second-quarter profit. The automaker was helped by increased sales in Europe. General Motors fell $1.67, or 4.5 percent, to $35.74 after announcing an 85-percent drop in quarterly earnings. The company is in the midst of the worst recall crisis in its history.

Investors got some good news about jobs. The Labor Department reported weekly applications for unemployment aid dropped 19,000 to a seasonally adjusted 284,000 claims. That’s the lowest reading since February 2006, nearly two years before the Great Recession began.

This article appeared in print on page 18 of the July 25th, 2014 edition of Hamodia.