Israel Israel Believes Hamas on the Verge of Collapse
Israel 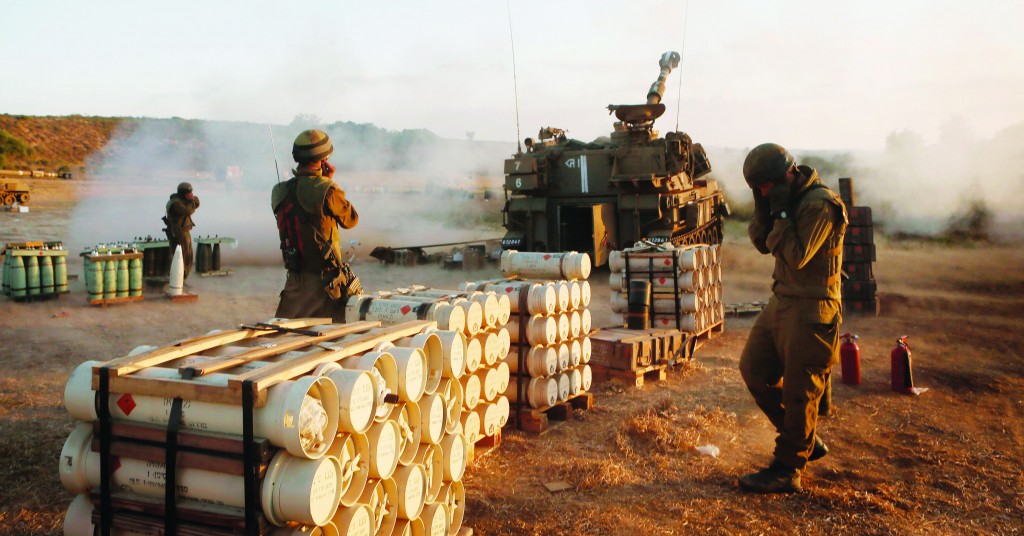 For the first time since the beginning of Operation Protective Edge, there are clear signs that Hamas is on the verge of collapse. It is continuing to fight, but there is a steady decline in the number of rockets it is firing at Israel, and Hamas fighters have even emerged from buildings with hands or white flags raised in surrender.

Israel assumes that Hamas is on the brink of an internal crisis, stemming from the terrific blows it has sustained from the loss of hundreds of fighters who were killed or wounded. They are also seeing their weapons arsenal shrinking; a large part was damaged in Israel’s air strikes, while a significant amount has been fired at Israel, but did not reap the hoped-for fruits. And with that, the terrorist are still trying at every opportunity to attack IDF soldiers, will continue firing missiles all over the country, and will insist on attaining its demands in order to agree to a ceasefire.

The most obvious breach in the ranks is in face-to-face clashes with IDF soldiers. Fewer Hamas fighters are taking on IDF soldiers, there is more sporadic fire from afar, and the air strikes of the past few days have caused general chaos in the organization’s ranks and exacerbated the internal strife between the political wing and the military wing of Hamas.

From an average of 120 to 130 missiles a day fired into Israel in the first few days of the ground operation, they are now averaging 70 a day. Thursday night, the terrorists also fired a missile from the Sinai Desert toward Eilat, triggering air raid sirens there. The missile was intercepted by the Iron Dome battery.

The organization has lost half, or more, of its missiles, and 50 percent of its production facilities where it manufactured its own weapons. However, the ranks of commanders, who are hiding deep underground, have not yet been significantly harmed, in contrast to Islamic Jihad, which has had many of its senior operatives liquidated.

Hamas has not reached the goals it has set for itself and is frustrated by that. It did not carry out an air, sea or underground attack of the scope it wanted to. Israel was able, in most cases, to either thwart the attack entirely or reduce its effectiveness. Even the long range missiles were thwarted, bechasdei Shamayim, by the Iron Dome system, the home front’s obeying of instructions and the massive air strikes targeting Hamas’ weapons stores. The ground incursion took Hamas by surprise, both because of the timing that Israel chose and due to the fact that Israel did not enter deeper into places where Hamas had prepared ambushes for the soldiers.

During the 17th day of Operation Protective Edge, the IDF attacked some 130 terror targets, among them concealed launchers, lookout posts and rocket fire infrastructure.

In the early morning, a paratroop brigade discerned two terrorists emerging from a tunnel opening. They were taken by surprise, raised their hands in surrender, were apprehended and transferred to defense authorities for questioning.

Furthermore, a brigade then identified a terrorist with an explosives belt in the southern Gaza Strip. The force opened fire at the terrorist and hit the target. Later, the same force discovered two tunnel openings right nearby.

In the morning, an anti-tank missile was fired at IDF forces from the Uafa Hospital building, which was attacked on Wednesday, but remained partially intact. During the exchange of gunfire, two terrorists were killed. An hour later, the air force struck the building from where the shooting was conducted and destroyed it completely. The air force also struck a building near the hospital that served as a weapons storehouse and a command and control center.

Since the beginning of the operation, the IDF has discovered 32 tunnels, of which 12 have been rendered completely unusable, while the others are being prepared for destruction.

IDF spokesman Motty Almoz said Thursday night that there seems to be a trend showing a decline in the intensity of Hamas’ activities, but Israel prefers not to acknowledge it in order not to cause a resurgence of their activities.
Almoz said that Hamas has sustained a very significant blow. It had prepared to conduct mass infiltrations into Israel through their tunnels, but now most of those tunnels are controlled by the IDF. Fewer Hamas terrorist are seen in the field and, for the first time, Hamas operatives are coming out of tunnels or houses with white flags or hands raised, and turning themselves in to the soldiers.

Some of them, Almoz said, bring with them a lot of valuable intelligence information about the tunnels and the weapons factories.

The IDF has so far arrested nearly 300 Palestinians, who have been interrogated from the first minute of the operation. If they discover that a person is not involved in terror activity, he is released right away. Only a few of the detainees are ultimately found to be Hamas operatives. In recent days, the IDF soldiers also noticed terrorists removing their uniforms and trying to blend in with the families that have left the different neighborhoods and tried to flee to the southern part of the strip. Some were arrested and sent for interrogation.

In response to a question posed by Hamodia’s military correspondent, Almoz said that the IDF does not hear of all the cease-fire proposals that appear more in the media than in actual diplomatic discussions. The government has instructed the army to continue full- force and, as long as there is no other directive, that is exactly what they are doing, Almoz said.

With that, our reporter says, the government’s actual instructions to the army are that there is a chance for a cease-fire, at an unknown time and, therefore, the army should speed up its operations and continue to do what it can to expose and destroy as many tunnels as possible, capture more terrorists, and destroy missiles and weapons that can be found in virtually every house in the Gaza Strip.

Prime Minister Binyamin Netanyahu said yesterday at the beginning of a special cabinet meeting that convened in a reinforced room in the Knesset that “IDF soldiers continue to work forcefully throughout the Gaza Strip. To date, the IDF has dealt a significant blow to terror infrastructure — to the terrorists, rockets, command centers, factories and other targets.

“We are continuing Operation protective Edge with full force, both on the air front and the ground front. The emphasis in the ground operation is dealing with the threat of tunnels. Although there is no 100 percent guarantee, the IDF is ratcheting up significant achievements in locating and neutralizing terror tunnels. I remind you that these tunnels are intended to infiltrate into Israel and to enable the enemy to conduct mass terror attacks in Israel.

“In the last day,” the prime minister added, “we have worked together with the National Security Advisor and with the Transportation Minister to annul the decision to suspend flights to Israel. This has reaped fruits. This is very important to Israel.”