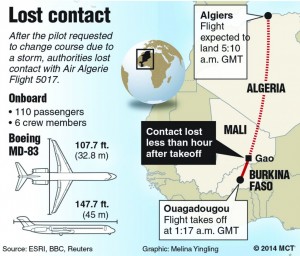 French warplanes and U.N. helicopters scoured the north of Mali on Thursday for the wreckage of an Air Algerie flight after it crashed carrying 110 passengers, nearly half of them French, from Burkina Faso to Algiers.

French Foreign Minister Laurent Fabius said authorities believed flight AH5017 may have encountered bad weather after the pilot requested to change direction shortly after takeoff due to a storm. However, he said no hypothesis had been excluded.

Officials in Mali and Burkina Faso gave conflicting accounts of locating the crash.

Malian President Ibrahim Boubacar Keita said wreckage of the flight had been spotted in his country’s far north, toward the Algerian border between the towns of Aguelhoc and Kidal.

However, General Gilbert Diendere, a member of the crisis unit in Burkina Faso, said his team had found remains in southern Mali, 50 km (30 miles) from the Burkinabe border. Local authorities in the nearby town of Gossi also told Reuters the wreckage had been located here.

In Paris, Fabius said the flight, carrying 51 French nationals, had probably crashed but he said two French Mirage warplanes searching the vast desert area around the northern Malian city of Gao had spotted no wreckage.

“Despite intensive search efforts, no trace of the aircraft has yet been found,” Fabius told journalists.

An Algerian official, who asked not to be identified, confirmed the flight had crashed but provided no other details.

French President Francois Hollande cancelled a planned visit to overseas territories and said France — which has some 1,700 troops stationed in Mali — would use all military means on the ground to locate the aircraft.

“The search will take as long as needed,” Hollande told reporters. “Everything must be done to find this plane. We cannot identify the causes of what happened.”

The searchers mission is complicated by the vast scale and daunting terrain of Mali. The area where the flight is suspected to have crashed is a sparsely inhabited region of scrubland and desert dunes stretching to the foothills of the Adrar des Ifoghas mountains.

Another plane crash is likely to add to nerves over flying after a Malaysia Airlines plane was downed over Ukraine last week, a TransAsia Airways crashed off Taiwan during a thunderstorm on Wednesday and airlines temporarily cancelled flights into Tel Aviv due to the conflict in Gaza.

Algeria’s state news agency APS said authorities lost contact with flight AH5017 an hour after it took off from Burkina Faso, but other officials gave differing accounts of the times of contact.

Swiftair, the private Spanish company that owns the plane, confirmed it had lost contact with the MD-83 operated by Air Algerie, which it said was carrying 110 passengers and six crew.

A spokeswoman for SEPLA, Spain’s pilots union, said the six crew were from Spain. She could not give any further details.

It said it took off from Burkina Faso at 0117 GMT and was due to land at 0510 GMT but never reached its destination.

This article appeared in print on page 9 of the July 25th, 2014 edition of Hamodia.