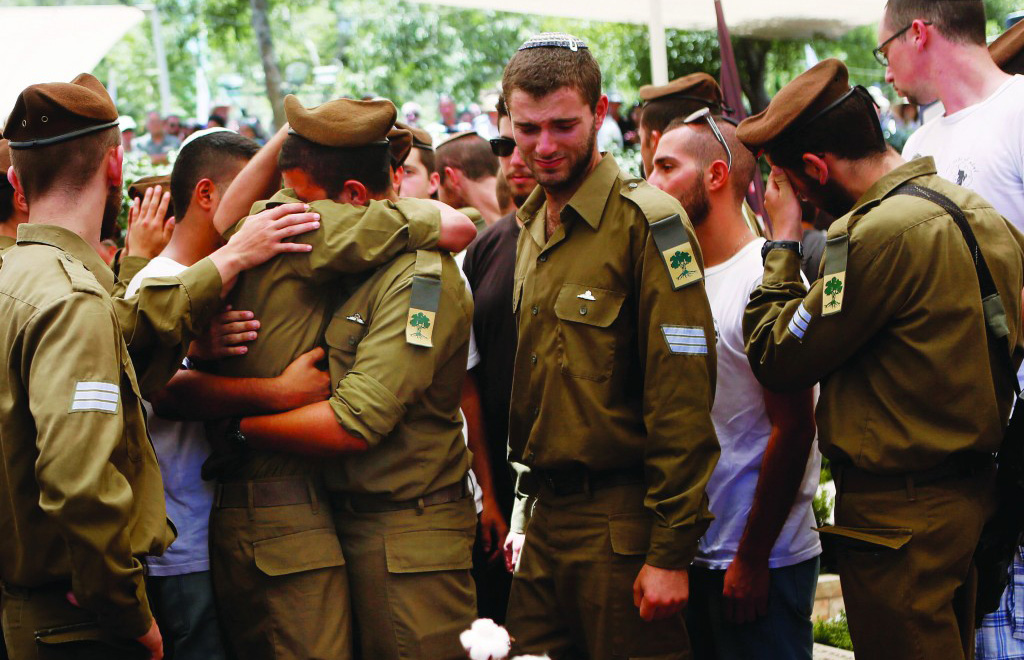 The Israeli political establishment gave the go-ahead Wednesday for the IDF to intensify its offensive across the Gaza Strip. But concurrently, Israel is continuing to pay a tragic price. Five soldiers and a foreign worker were killed in exchanges of fire from Tuesday night to Wednesday night. The foreign worker was killed by shrapnel from a missile that was fired to one of the towns near Gaza.

Terrorists continued to fire rockets into Israel, maintaining an average of about 80 rockets, similar to the day before.

The regular exchange of fire fell silent near midnight on Wednesday night. And then it became very quiet. But within minutes, the skies over Gaza changed. It began with dull noises, the type that had not been heard in the area. It was the sound of heavy bombers. And they appeared, one after another, releasing huge megabombs, each weighing between one and one and a half tons of explosives. The explosions that made the earth shudder could be heard even 15 kilometers away from where the bombs fell. The skies were illuminated like it was daylight. Clouds of smoke rose into the sky and not a single star could be seen in what was probably a clear summer night sky.

Israel took off the gloves, though it is continuing to examine each target carefully — through the eyes of the legal echelons.

In contrast to the earlier days of combat, the IDF intensified the air strikes, dropping massive bombs on Saajaiya and on the outskirts of Gaza City, where the army is slowly moving in.

Israel estimates that some 250 terrorists, most of them from Hamas, are on the list of 650 people that the Gazans have reported dead.

Yesterday, too, clashes continued around the tunnels. Forces in Gaza discovered several more tunnels leading into Israel, as well as new openings. Yesterday afternoon, the Chief of General Staff Major-General Benny Gantz toured the units in the field, checking the readiness of the forces, and issuing further instructions for the operation. “They were instructed not to remain static, to continue to attack terrorists and to go further into the Strip to reach targets. We are controlling plenty of tunnels and right now are working to destroy them,” he said.

The IDF lost five soldiers and officers. Three were killed yesterday morning when explosives were detonated in a house in Saajaiya, and two were killed on Tuesday night in two separate incidents.

One of the casualties is IDF officer, Captain Dmitri Lavitas, Hy”d, the commander of an armored division, aged 26, from Yerushalayim. Captain Lavitas was killed by sniper fire. His levayah took place yesterday on Mount Herzl’s military section.

The second casualty from the night battles was Captain Natan Cohen, Hy”d, a unit commander in the armored division, 23, of Modiin. Captain Cohen was promoted posthumously. The levayah took place in the military section of the Modiin cemetery last night.

Three paratroopers were killed yesterday when they entered a house after receiving reports that it had been converted into a weapons storehouse.

Indeed, as soon as they entered they found the weapons, but before fleeing the house, Hamas had planted concealed bombs, and one of them exploded near the paratroopers, killing three of them.

Sergeant Eliyahu, Hy”d, 22, was from Evron; he was posthumously promoted from the rank of Second Lieutenant.

Staff Sergeant Meth, Hy”d, 19, of Eilat, was posthumously promoted from the rank of sergeant.

Staff Sergeant Dover, Hy”d, 20, was from Geniger. He was posthumously promoted from the rank of sergeant.

Throughout the day, one solider was critically injured, three were seriously injured, 10 were moderately wounded, and 20 soldiers were injured lightly during military activity. Their families were informed of their injures.

Since the beginning of Operation Protective Edge, 32 soldiers and three civilians have been killed.

The civilian killed yesterday was a foreign worker from Thailand who worked in the hothouses of a town in the Chof Ashkelon regional council. He arrived in Israel just a few days ago. A mortar fired at the town where he worked fell just three meters from where he was taking a midday rest. The man was injured by the shrapnel, lost a lot of blood, and by the time he was taken to the military medical post nearby had already passed away.

He was the third civilian to be killed during the operation. Several days ago, a Bedouin, Uda al Wadj, 32, was killed by a missile that struck his tent near Dimona. His wife and two of his children, aged one and two years, were injured. Three days earlier, Dror Chanin, Hy”d, was killed when he came to the border to distribute food and treats for the soldiers. He was killed by shrapnel from a missile that landed near one of the crossings into the Gaza Strip.

The senior commanders who were killed were affiliated with Islamic Jihad and were responsible for many terror attacks against IDF soldiers near the border with Gaza, and for firing rockets into Israel. They played dominant roles in the current operation as well, until they were cut down yesterday.

Among the senior terrorists who were killed are:

• Akram Salah Shaer, a member of Islamic Jihad, who was responsible for the group’s military activity in the Khan Younis area. He was behind many attacks against IDF soldiers on the border, and the  firing of rockets from Khan Younis to Israel.

• Mahmoud Awad Ziada, a resident of Jabalya and a prominent Islamic Jihad member; he commanded a unit of the organization’s fighters in northern Gaza.

• Shaban Khaled Dahdouh, a resident of Gaza City and also a prominent Islamic Jihad member, commanded a unit of fighters in Gaza City.

Early in the afternoon, an armored force detected armed fighters shooting from motorcycles. They returned fire and hit the targets.

Around the same time, a terrorist wearing an IDF uniform was detected in Gaza. Throughout the day, some 150 terror suspects were arrested and given over for questioning.

In addition, 12 terrorists dressed up and hiding inside an ambulance were detected driving up to a building in the southern Gaza Strip. An IAF aircraft bombed three of them outside the building. After a short time, the entire building, with the terrorists inside, was bombed.

Hamodia’s correspondent cites an example of the activities of the 401 armored brigade. Since the beginning of the ground operation, this brigade, and the forces working with it, have taken out more than 150 targets across the northern part of the Strip, and have killed 20 terrorists. Throughout the operation, the soldiers have also thwarted an explosives-laden car from reaching its destination by firing at it, and discovered weapons caches.

Using Merkava 4 tanks and the “raincoat” protective system, they can work deep inside the Strip and liquidate the enemy from a distance, while facing the threats of the anti-tank missiles and helping the infantry conduct raids.

IDF Spokesman Brig. General Motty Almoz replied to a question posed by Hamodia yesterday regarding the continuation of Operation Protective Edge. “We are making great progress and are working quickly to complete the operation.” To date, he said, some 30 tunnels have been found, with dozens more tunnel openings that are being examined, one by one.

“The intelligence achievements regarding tunnels are very significant. When a soldier enters and receives a mission to find a tunnel, he is not groping in the dark,” Almoz explained. “There are hundreds of soldiers currently searching and their job is to find an opening a mere 60 to 70 centimeters wide, and usually camouflaged. And from there he needs to understand that there’s a tunnel there.” According to Almoz, intelligence estimates are that there are dozens of tunnels in the Strip. “I can say that most of the tunnels that intelligence reports indicated are already in our hands,” he said.

“For Hamas, the tunnels are a strategic asset. Hamas understands very well what is happening the minute it sees an IDF force from a distance standing along a route that it planned for years, and guarding it carefully,” he described. “Just a few days ago, we saw the significant roles these tunnels played in several attacks. We have to make sure that the soldiers understand this, and continue to maintain their level of alert.”

Regarding the continuation of the operation, Almoz stated that “The operation relating to destroying tunnels needs days. We are increasing the pressure and working intensively, and we will continue to do so in the coming days.”

He also addressed the issue of the missing soldier, Sergeant Oron Shaul, and stressed that “we are working to identify all the items found at the scene, and continuing to investigate the incident, and are constantly studying the facts that we receive from the field. The minute we have more information, we will publicize it.” He said it is hard to determine the soldier’s fate based on the information the army has at this point.

For now, Sergeant Shaul is classified as missing. “We need to see this through the lens of a battlefield and to act cautiously,” he noted.