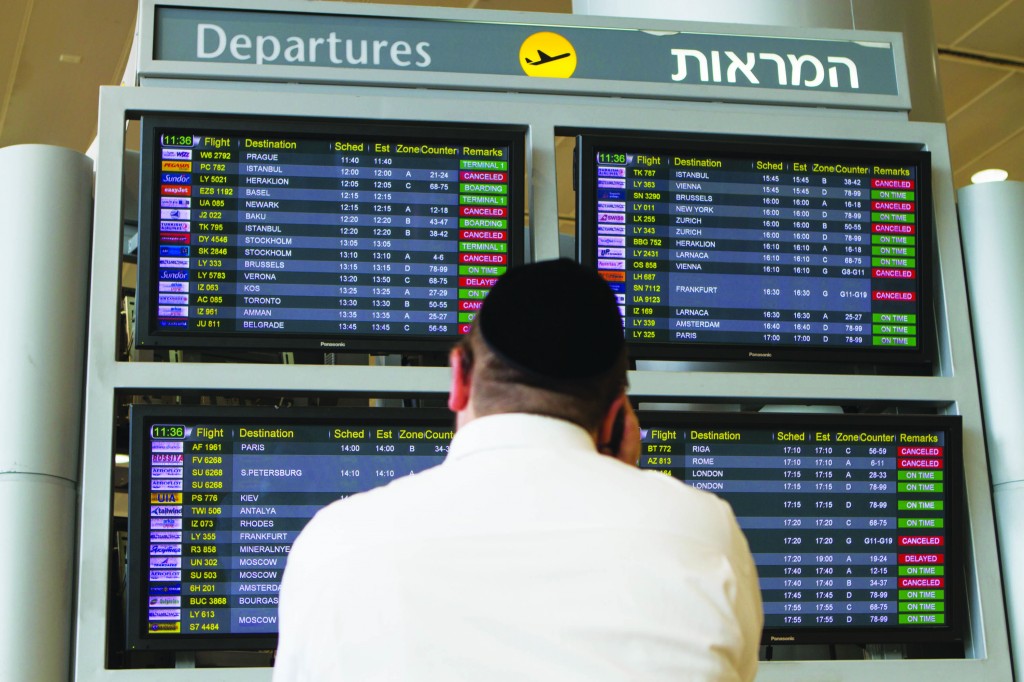 The wave of bans on passenger flights to Israel has dealt a further blow to the country’s tourism industry and left thousands of Israelis stranded in the U.S. and Europe.

Some 4,000 Israelis were reportedly in Istanbul without a way to get home after the sudden decision by the U.S. and European carriers to suspend departures for Tel Aviv after a Hamas rocket landed in Yehud, a town not far from Ben Gurion Airport.

Prime Minister Binyamin Netanyahu reportedly appealed directly to U.S. Secretary of State John Kerry on Tuesday evening to use his offices to help restore regular flights to Israel from the U.S. But the State Department did not appear inclined to mediate.

Asked whether Netanyahu had asked for a withdrawal of the FAA order, a senior Obama administration official said he was not aware of the request, but added: “We’re not going to overrule the FAA, period.”

“We understand Israeli concerns. They don’t want to have a shutdown of air traffic into Ben Gurion. We can look at this every 24 hours, but [when] a rocket lands a mile from that airport, that kind of trips their wire.”

Republican Sen. Ted Cruz on Wednesday questioned whether President Barack Obama used a federal agency to impose an economic boycott on Israel after the Federal Aviation Administration banned U.S. airline flights to Tel Aviv because of safety concerns amid fighting between Israel and Hamas.

“The facts suggest that President Obama has just used a federal regulatory agency to launch an economic boycott on Israel, in order to try to force our ally to comply with his foreign-policy demands,” Cruz said in a statement in which he posed five questions about the agency’s actions, including whether it was politically motivated.

State Department spokeswoman Marie Harf called the Texas senator’s comments “ridiculous and offensive.” She said the FAA makes its “decision based solely on the security and safety of American citizens, period.”

For Israel, the flight bans represent not only an economic loss and inconvenience to its citizens traveling abroad, but a setback in the war against Hamas.

“There is no reason for the American companies to stop their flights and give a prize to terror,” said Transportation Minister Yisrael Katz.

Katz gave voice to Israeli frustrations, insisting at a press conference that Ben-Gurion Airport was safe for take-offs and landings, and that suspension of flights was unjustified.

But he held out hope that the situation would soon return to normal, explaining that he believed the FAA decision was an automatic reaction to the rocket landing in Yehud, and hoped to convince them to quickly reinstate flights.

In the meantime, Israeli officials scrambled to provide a secure alternative for landings, but to no avail.

Katz gave orders to open the Uvda airport, located just north of Eilat, and it was made ready by noon Wednesday. However, none of the airlines which have suspended operations in Israel would go along with the plan, a Transportation Ministry spokesman said.

“No airline would fly there — this is not a solution for an airport like Ben-Gurion or the residents of the central part of Israel,” an industry source told The Jerusalem Post.

The small Uvda airport does not have facilities to compare with Ben-Gurion, and the airlines would not give it serious consideration as a substitute, even on a temporary basis.

Katz disclosed that his ministry had attempted to persuade Turkish aviation officials to allow the stranded Israelis to fly back home, but the Turks would not agree to land their aircraft in Uvda.

Should the suspension continue, it could have an adverse effect on the economy. Tourism accounts for about 5% of Israel’s exports and 1.5%-2% of GDP. Incoming tourism has already declined as a result of the rocket fire from Gaza, with organized groups canceling at a rate of about 30% for July and August.

However, a short-term suspension would not pose a significant impediment to business operations in general, according to the Federation of Israeli Chambers of Commerce’s Uriel Lynn.

“Is it affecting Israel’s business now? No. It’s 24 hours. It’s not a big deal. We have telecommunications infrastructure that helps us get business done,” Lynn told The Jerusalem Post when asked if businessmen unable to get to Israel would be hampered by the situation.

Lynn echoed Katz’s concern about letting Hamas shut down Ben Gurion airport, but suggested it could provide an incentive to keep the suspension brief.

“The moment they forbid flights to Israel, they strengthen Hamas, who say, ‘Great, we’re succeeding in isolating Israel, we’re fulfilling our goals.’ I don’t think the FAA wants to do that,” he said.

While U.S. and European carriers were staying away, El Al lived up to its role of flagship airline on Tuesday night, issuing a statement that “There is no chance we will stop operations.”

However, a plane ticket to Israel has suddenly become a coveted possession, and prices have skyrocketed. For example, an El Al ticket to New York that yesterday cost $1,450, today jumped to $2,220; a difference of $770, according to ISSTA Lines.

El Al CEO David Maimon told Globes that his company has had no hand in any price rise.

“Naturally, when there is extremely high demand, the cheaper tickets are snatched up, and what is left are the more expensive ones — and this is what happened. The last fare is always the most expensive. We did not change our pricing system, which was set six months ago,” he explained.

In a statement, the company said: “Over the past day we have been making efforts to increase our flights and service. Among other things, the company added two flights to Greece and to Cyprus, and increased and allocated wide aircraft with hundreds more seats to destinations in Europe. In addition, the company increased its customer service center’s hours of operation in order to answer to the needs of as many Israeli passengers around the world as possible.

Also on Wednesday, Tourism Minister Dr. Uzi Landau announced that the ministry has opened a situation room to try to provide solutions for tourists whose flights have been canceled, in order to ensure that no tourist will be left without accommodation

At the same time, the 19 Tourism Ministry offices around the world are working on a special footing, providing airlines, travel agents and community leaders with updates on the current situation and preparing the groundwork for a tourism recovery as soon as the security situation ends.

The European Aviation Safety Agency late Tuesday said it “strongly recommends” that airlines refrain from operating flights to and from Tel Aviv. It said it would “monitor the situation and advise on any update as the situation develops.”

Although the cancellation of flights by such major companies as Air France, Lufthansa, KLM, Alitalia and Scandinavian Airlines have made headlines, some 22 other foreign airlines continued their flights into Israel. They included British Airways, Aeroflot and Ukrainian Airlines, which operate several flights a day.
(With reporting from Associated Press)