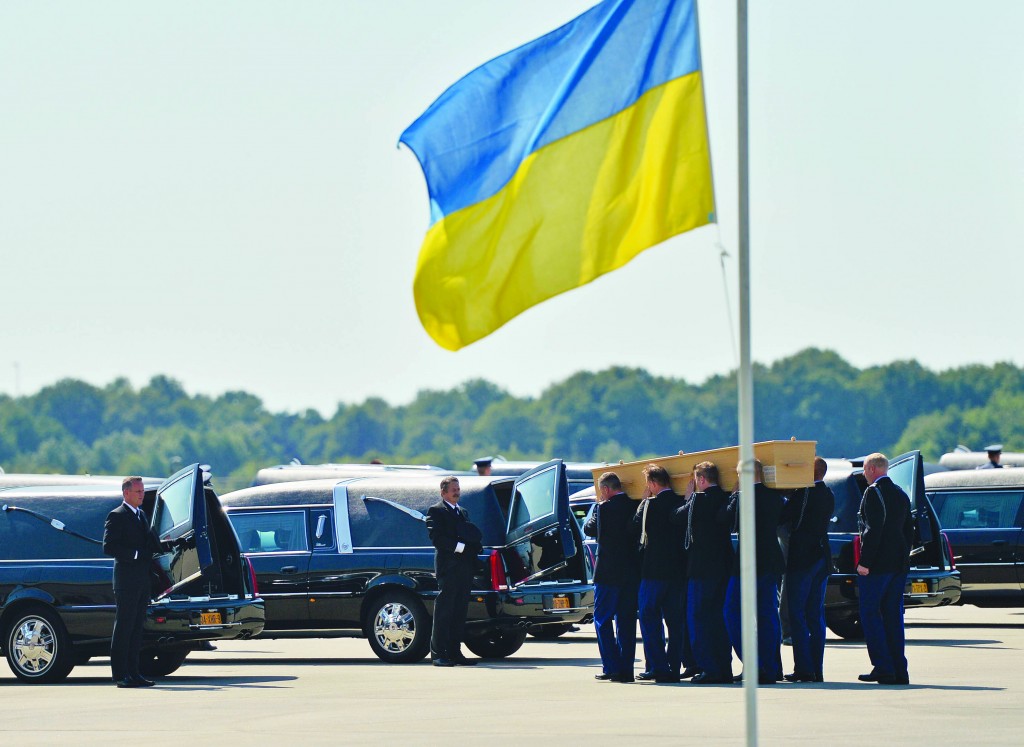 Victims of the Malaysian jetliner shot down over Ukraine returned at last Wednesday to Dutch soil in 40 wooden coffins, solemnly and gently carried to 40 identical hearses, flags at half-staff flapping in the wind.

The carefully choreographed, nearly silent ceremony contrasted sharply with the boom of shells and shattered glass in eastern Ukraine as pro-Russian rebels fought to hang onto territory and shot down two Ukrainian fighter jets. The bold new attack showed the separatists are not shying away from shooting at the skies despite international outrage and grief at the downing of Malaysia Airlines Flight 17.

Even though they are still  unidentified, the corpses that arrived on two military transport planes in Eindhoven were embraced by a nation unmoored by the loss of so many people caught in someone else’s faraway war.

Nearly a week later, international investigators still don’t have unfettered access to the crash site, some remains have yet to be recovered, and armed men roam the region, defying their government.

Investigators in a lab in southern England began studying the plane’s “black boxes” Wednesday in hopes of learning about the Boeing 777’s final minutes. The Dutch Safety Board, which has taken control of the investigation, said the cockpit voice recorder suffered damage but showed no sign of manipulation, and its recordings were intact. Specialists will start studying the flight data recorder Thursday.

Families of passengers moved to a new stage of grief as the bodies began arriving in the Netherlands, the country that bore the heaviest death toll.

The families had spent days agonizing in wait while their loved ones’ remains lay in sweltering fields in eastern Ukraine before being gradually shifted by truck, train and plane.

“If I have to wait five months for identification, I can do it,” said Silene Fredriksz-Hoogzand, whose son Bryce died in the crash. “Waiting while the bodies were in the field and in the train was a nightmare.”

On a day of national mourning, flags flew at half-staff on Dutch government buildings and family homes around this nation of 17 million.

Two more planeloads of victims will be flown Thursday to Eindhoven to a similar ceremony, the Dutch government said.

The rebels, undeterred, fought to hold onto territory and said they attacked two Ukrainian air force jets in the same area where the passenger plane fell.

Ukraine’s Defense Ministry said the Su-25s were shot down about 30 kilometers (20 miles) south of the wreckage from the Malaysian jet. The separatist group Donetsk People’s Republic said on its website that one of the pilots was killed and another was being sought by rebel fighters.

The attack revived questions about the rebels’ weapons capabilities — and how much support and training they are getting from Russia. The U.S. accuses Russia of backing the separatists and fueling Ukraine’s conflict, which has brought Russia’s relations with the West and key trading partners in Europe to a two-decade low.