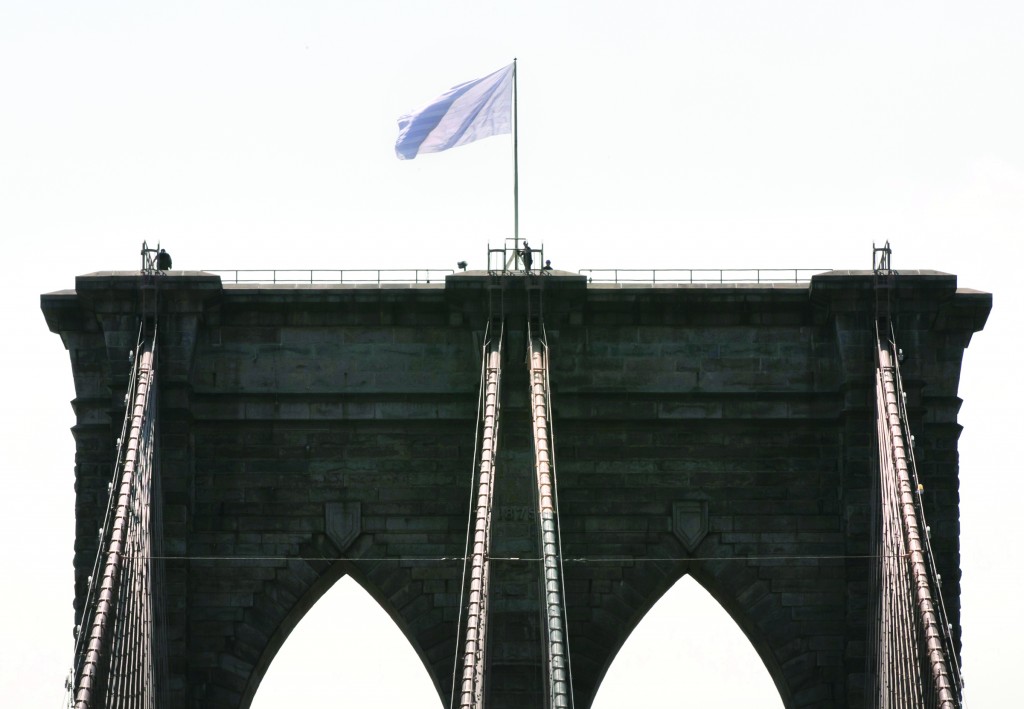 The New York City Police Department is trying to figure out who replaced the American flags that fly atop the Brooklyn Bridge — one of New York City’s most heavily secured landmarks — with white surrender banners, spotted Tuesday morning fluttering in the wind.

The replacement flags were at opposite ends of the bridge, where the Stars and Stripes are normally displayed, and were removed. The NYPD’s Counterterrorism Bureau and Emergency Services Unit is probing the incident and reviewing surveillance video to determine who replaced the flags and when the act took place.

A Twitter user called Bike Lobby claimed it hoisted the flags to signal “surrender of the Brooklyn Bridge bicycle path to pedestrians.”

Reports of the incident and photos went viral on the internet and the story appeared on the top of the Drudge Report news website. Brooklyn Borough President Eric Adams, a former police officer, said in a statement that he plans to offer a reward for information related to the arrest of suspects.

City Council member Mark Weprin said he was stunned by the incident and called for the NYPD to probe how someone was able to bypass patrol cars and security cameras.

Police removed the white flags just before noon from poles on the stone supports that hold cables above the bridge. One of the flags, viewed via video, appeared to have faint traces of stars and stripes on it. That led to speculation that the flag was painted over.

The Brooklyn Bridge, which opened in 1883 and was once the longest suspension bridge in the world, carries more than 120,000 vehicles, 4,000 pedestrians and 3,000 bicyclists every day.