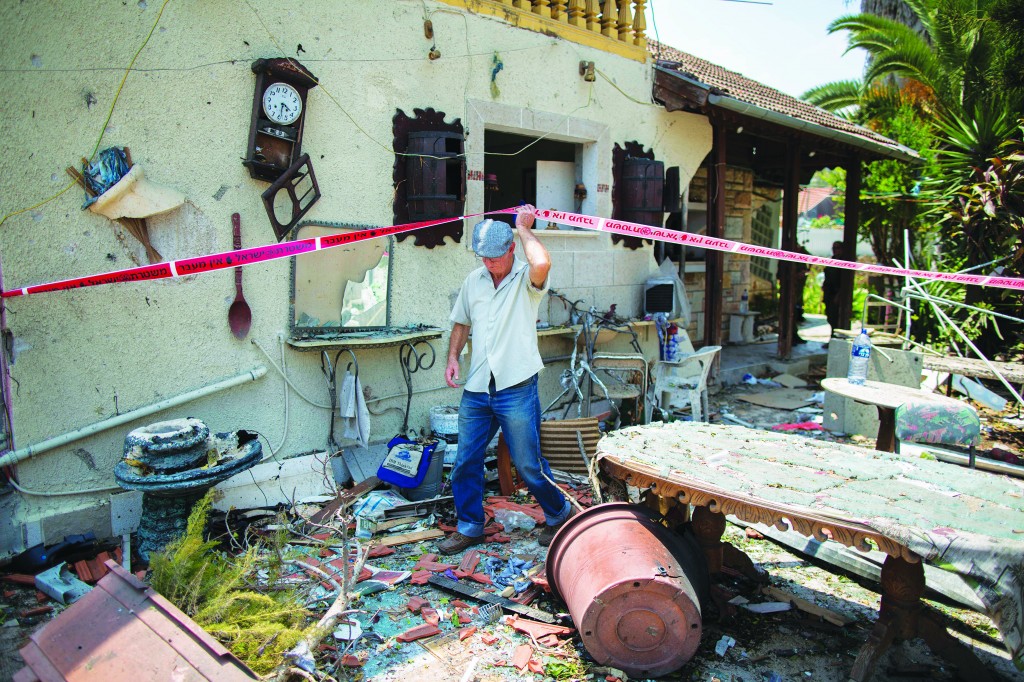 The war in Gaza appeared to be reaching its peak on Tuesday, as Israel mourned the loss of three additional soldiers, bringing the total killed since the ground operation began to 28.

As international diplomats ratcheted up their efforts to try to implement a ceasefire, both sides tried to achieve as much as possible before taking up positions at the negotiating table.

The IDF has expanded is hold around the eastern neighborhoods near Gaza City, and is waging heavy battles with terrorists who are firing from both short and long range.

Three more soldiers fell in battle yesterday, while more than 30 officers and soldiers were wounded, three seriously. The Palestinians reported dozens of people dead in this one day, civilians and terrorists alike.

Ohad Shemesh, 27, a non-commissioned officer, was from Beit Elazari, and was killed in a clash with terrorists. He was promoted to the rank of First Sergeant posthumously. His levayah took place yesterday in the military section of the Mazkeret Batya cemetery.

The second soldier, Sergeant Major Oded Ben Sira, 22, of the town of Nir Etzion, was also killed in a clash in the Gaza Strip.

IDF forces continued their ground offensive launched in light of the incessant rocket fire into Israeli’s populated areas. As of now, it is still a pinpoint operation, and the objective is to destroy the terror infrastructure in Gaza. According to the results of the last 24 hours, it is clear that the forces are becoming more familiar with the region than they were in the initial few days. The gun battles are growing shorter, as the terrorists either flee or fire on the soldiers only from afar. As such, yesterday saw the lowest number of casualties since the beginning of the ground operation on Thursday night. Moreover, concurrent to the decline of Israeli casualties, there has been a significant rise in the number of terrorists that have been struck down.

One of the major issues the IDF and the political echelons were dealing with yesterday is the disappearance of one of the seven IDF soldiers who were hit by terrorist fire while they were riding in an old-model armored personnel carrier through one of the streets of Saajaiya.

The APC, a “Zelda” M13, which is only lightly reinforced against regular gunfire, got stuck in one of the alleyways. The soldiers inside summoned reinforcements, who quickly dispatched a later model APC that is much more secure, and which is built similar to a Merkava tank. But the terrorists utilized the time that the APC was standing in place to call launch RPGs at it; the APC took a direct hit, broke apart and went up in flames.

Yesterday afternoon, the IDF completed the identification of the seven soldiers who were killed by enemy fire at an APC on Sunday. The body of one of the soldiers who was in the APC, Sergeant Oron Shaul, a Golani fighter, 21, of Poriya, was not found. An investigation is ongoing. Hamas announced that it has an Israeli soldier and specified the name of the missing soldier, but didn’t disclose whether or not he was still alive.

IDF Spokesman Brig. General Motty Almoz clarified yesterday that in the incident that took place on Sunday at dawn in the Gaza Strip, an APC with Golani soldiers inside was badly damaged. Until now, six bodies were identified with certainty. The families of all seven soldiers were informed yesterday that they had been involved in the incident. The IDF, he said, is in constant contact with the families, and efforts to identify and find out what happened to the seventh fighter are continuing on all fronts.

But the family of the missing soldier issued its own statement that said that as long as they do not receive definite proof that their son is no longer alive, they are relating to him like a live soldier, and are demanding that all searches and investigations into his disappearance continue.

The Golani soldiers killed in that incident are:

Sergeant Max Steinberg, 24, of Be’er Sheva. He was promoted posthumously from the rank of corporal to sergeant.

Staff Sergeant Shachar Taaseh, 20, of Pardesiya, who was promoted posthumously from the rank of sergeant. His levayah took place in the military section of the cemetery in Pardesiya yesterday.

Staff Sergeant Daniel Pomerantz, 20, of Kfar Azar, who was promoted posthumously from sergeant.

Sergeant Sean Mondshein, 19, of Tel Aviv, who was promoted from corporal to sergeant.

Sergeant Ben Wanunu, 19, of Ashdod was promoted from corporal posthumously. His levayah took place yesterday in the military section of the cemetery in Ashdod.

Hamodia’s correspondent relates that, since the beginning of the operation, 2,900 terror sites have been targeted. Until now, the IDF discovered 63 tunnel openings into 23 tunnels, some of which are located inside private homes and mosques. They have bombed out the routes of six tunnels from inside. A senior defense official told military correspondents yesterday that the IDF will need between one and two weeks more in order to complete the current stage of the operation, which is focusing on locating and destroying tunnels.

“The more strategic assets they have, the closer they will guard them,” a combat officer in the Southern Command said last night. Many of the tunnel openings discovered in the operation were found in this neighborhood, and 10 percent of all the rockets were fired into Israel from this area. Of the 66 tunnel openings that were found, dozens are located in Saajaiya, which means there is extensive underground operation there. In addition to the tunnel openings, the IDF has also found one tunnel that reaches Israel. “Saajaiya is clearly a center for terror activity,” says Captain D., an intelligence officer in the Southern Command.

The neighborhood is built more densely than other parts of the Strip and the combat there needs to be conducted accordingly. “Combat there requires complex abilities; this is the closest neighborhood in Gaza City to the Israeli border. There are almost no outskirts; one step inside and the soldiers are deep into built-up areas,” Captain D. expounded. In addition, the neighborhood is characterized by extremely close proximity between terror activity and civilians. “There are many command centers located in civilian homes,” the officer said.

Yesterday alone, 258 terror targets in that neighborhood were hit, out of a total of 2,900 so far. Since the beginning of the ground operation, more than 115 terrorists have been killed.