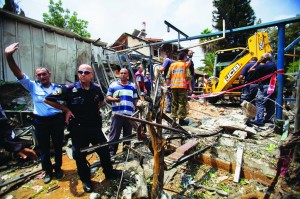 A Grad rocket fired at Ashdod scored a direct hit on a private home but, miraculously, no one was hurt when the projectile failed to explode.

Yaakov Granot and his three children had taken cover in a protected room when they heard warning sirens on Monday. Then they thought they heard something land outside. But when they emerged from the room shortly afterwards, they discovered that the rocket had landed on their house, tearing a gaping hole in the ceiling and lying scattered in pieces in the living room and balcony area.

The warhead itself, carrying a 60-pound payload, was lying on the balcony floor. It was spotted by a son who had served in the army and identified the fragment as a warhead.

They evacuated the house immediately and called the police. Explosives experts cordoned off the area and worked for hours to neutralize the explosive device.

They confirmed that, had it exploded, it would have destroyed a large part of the house.

Granot recounted that there had been a series of three sirens. “We were in the protected room when we heard a boom, not that loud, but the whole house shook. After a few minutes, we ventured out, thinking the explosion had been somewhere outside. But then we saw the pieces of the rocket scattered in our house.”

On Tuesday, Ashdod was targeted once again. The Iron Dome rocket defense system intercepted seven projectiles in the latest barrage from Gaza. Police said one rocket landed in an empty sports field near an educational facility in the city. Bechasdei Hashem, no injuries or damage were reported.

This article appeared in print on page 27 of the July 23rd, 2014 edition of Hamodia.