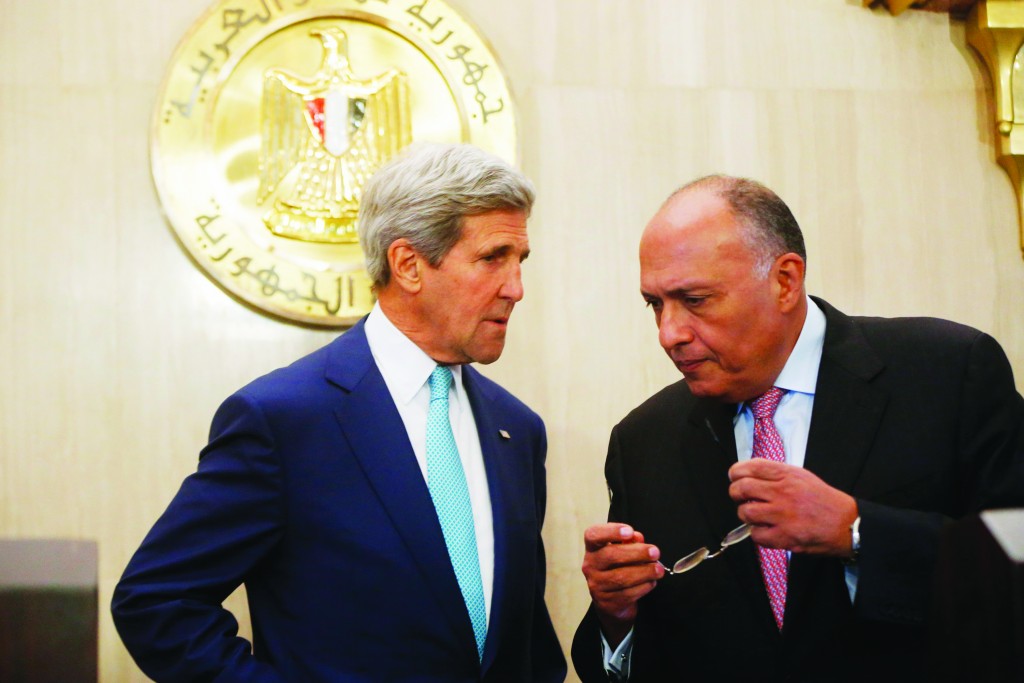 The international efforts to reach a cease-fire between Israel and Hamas are not advancing, and it seems like American Secretary of State John Kerry and U.N. Secretary General Ban Ki Moon, who are conducting the efforts to compromise, are on the verge of giving up. They have been unable to advance a cease-fire because of Hamas’ insistence on emerging “victorious” on the diplomatic front, despite being significantly subdued militarily.

Secretary Kerry, who has been working in Cairo to try and persuade the Egyptians to soften their framework for a ceasefire met with firm opposition of President el-Sisi’s representatives to do so. Concurrently, Ban Ki-moon, who came to Israel and met senior Israeli officials in Tel Aviv, understood that his proposal for a long-term humanitarian cease-fire was not realistic.

All the entities understand that the key lies in the hands of Hamas, who are not ready to capitulate and are insisting that all their demands be met, something that Israel — and Egypt — will clearly not do.

They were also surprised by the European Union, when all 27 of its foreign ministers publicized a joint statement demanding that Hamas desist from firing rockets into Israel.

The Israeli Foreign Minister published a statement expressing satisfaction at the European Foreign Ministers’ conclusions regarding Operation Protective Edge. The EU had announced several hours earlier that it is declaring again that it sees Hamas as a terror organization and vehemently condemns the indiscriminate firing of missiles on a civilian population. It also sees the way Hamas uses civilians as human shields and classifies those acts as crimes.

The Foreign Minister also welcomed the EU’s call to disarm the terrorist groups from their weapons and to demilitarize the Gaza Strip. The EU’s statements are in tune with Israel’s approach to the war on terror, and they open a door to cooperation to implement mutual principles to restore quiet and security, the Israeli statement said.

Foreign Minister Avigdor Lieberman, who spoke with several contemporaries in Europe before the meeting, said that the statement by the EU ministers makes it clear that the free world is united against the Hamas terror and Israel has the full right to defend itself. The minister also thanked the staff at the foreign ministry for their effective work that yielded these results.

Prime Minister Binyamin Netanyahu presented to Ban Ki-moon at the beginning of their meeting in Tel Aviv, the remnants of missiles fired from Gaza into Israel over the past few days. Among the missiles were two rockets, one 122 mm one that reaches 20 km from Gaza (Grad missile) and another rocket that can reach 40 km. Part of the motor on an M75 produced locally was also presented; such missiles can reach 80 kilometers away from Gaza; Ban also saw the warhead of a rocket that contains 20 kilograms of explosives.

He showed Ban the leaflets that were distributed in Gaza asking residents to leave to avoid being harmed, and a video clip showing the IDF locating launchers that can fire multiple Grad missiles at once, ready to be launched from within a field school in Beit Hanoun.

The prime minister’s office said the exhibit will be shown to other leaders who will be coming to Israel.
Defense Minister Moshe Yaalon met in Tel Aviv with Ban Ki-moon and said that Israel is ready and determined to continue with the operation.

“There is a terror entity in the Gaza Strip led by Hamas with other terror groups, and they violate international law and order by using missiles and terror to harm our civilians” Yaalon said. “They also use their own civilians as human shields. We are doing everything we can to avoid harming civilians, but sometimes it is almost impossible in areas in Gaza where Hamas has turned them into rocket launching sites and bases for terror attacks. Hamas fires missiles from schools, mosques, neighborhoods and more and they use underground tunnels to try and attack civilians and Israeli towns in the Gaza Envelope region. This is a challenge for us and we are working now to stop it.

“We are doing everything we can to avoid harming civilians, but there are certain times when we have to save injured soldiers and must use fire. We are ready and determined to continue with Operation Protective Edge until we stop this wave of terror against Israel’s civilians. This conflict has to be a signal for all jihad entities in the region that they should understand that terror doesn’t pay. The conclusion of this conflict has to be clear: terror doesn’t pay. We need to demilitarize this terrorist entity.”