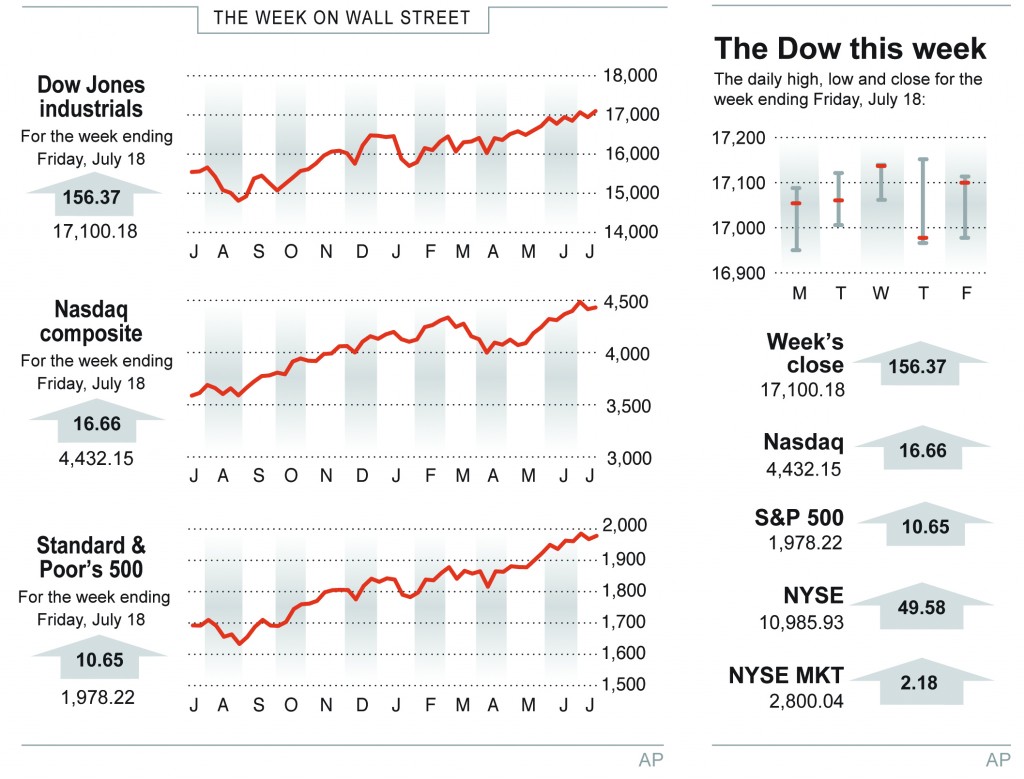 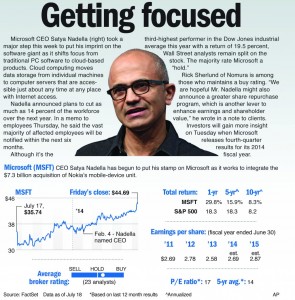 The gains wiped out much of the market’s losses from the day before, when the downing of a Malaysian Airlines passenger jet in eastern Ukraine stirred concerns that tensions between Russia and the West could escalate. Israel’s launch of a ground offensive into Gaza also stoked geopolitical uncertainty.

Those worries appeared to ease Friday, as world leaders called for an immediate cease-fire in the region and international attention turned toward the task of determining what led to the aircraft being shot down. Investors turned their attention to the latest encouraging company earnings.

“Typically when these events hit the news, it’s kind of a sell-now, ask-questions-later moment, and then there is a reassessment, and that’s exactly what we had,” said Quincy Krosby, market strategist at Prudential Financial. “Today, the market focused again on earnings, which for the most part were good, surprising to the upside, and the markets just basically got back to their normal business.”

Strong earnings from several companies kept the market in positive territory after it opened. Investors drove up shares in Google, Honeywell International, furniture company Knoll and Huntington Banchsares, among others.

The Conference Board’s latest index of leading indicators, designed to predict the economy’s trajectory, stoked the market further. The index climbed in June for the fifth consecutive month. At the same time, investors brushed off a preliminary report showing consumer confidence dipped slightly.

The market built steadily on its gains throughout the day, reversing nearly all of the prior day’s losses and putting all three major U.S. indexes into the green for the week.

The three major indexes remain ahead for the year.

“Clearly the equity market remains remarkably resilient,” he said. “Despite heightened political issues on the horizon the path of least resistance for equities is still up.”

Generally, early results this earnings season have been in line with investors’ expectations, and in some cases, much better, noted Lawrence Creatura, portfolio manager at Federated Investors.

Late Thursday, Google reported higher earnings and revenue, even as advertising rates continued to drop. Its stock added $24.29, or 4.2 percent, to $605.11.

Honeywell International gained $1.65, or 1.7 percent, to $96.82 after reporting that its income rose sharply in the latest quarter and beat investors’ forecasts.

Furniture and accessories company Knoll and semiconductor Skyworks Solutions also got a lift from quarterly results that exceeded Wall Street’s expectations. Knoll jumped $1.18, or 7 percent, to $18.15, while Skyworks rose $6.53, or 14.1 percent, to $52.87.

The second-quarter earnings season enters its busiest period next week, when the market will get financial results from companies including McDonald’s, Apple, Boeing and AT&T.