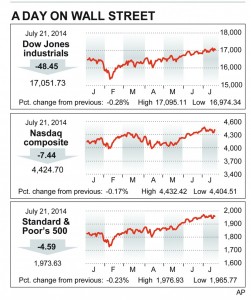 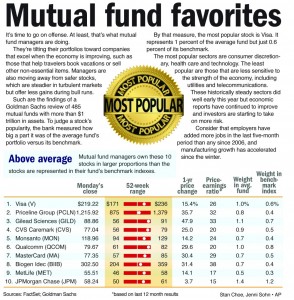 The stock market started the week with a slight loss on Monday as investors weighed a mixed batch of corporate earnings against mounting political turmoil.

European leaders are considering tougher sanctions on Russia for its backing of separatists accused of shooting down a Malaysia Airways passenger plane in Ukraine last week. The European Union’s foreign ministers will meet Tuesday to discuss their next steps.

In Washington, President Obama demanded that international investigators get full access to the crash site and said the separatists had blocked investigators.

“It looks like we hit a speed bump,” said Jack Ablin, chief investment officer at BMO Private Bank in Chicago. “Earnings are coming through quite nicely so far, but geopolitics trump earnings today.”

A few well-known companies turned in results that fell short of estimates on Monday. The toy maker Hasbro reported second-quarter earnings and revenue that came in below analysts’ targets. Hasbro’s stock sank $1.43, or 2.7 percent, to $51.78.

Six Flags Entertainment posted higher profits and sales in the second quarter, but the theme-park operator’s revenue came up short of what analysts had expected, partially a result of sluggish attendance. Six Flags slumped $1.69, or 4.1 percent, to $39.31.

Despite the dour news, the second-quarter earnings season is off to a strong start: Of the 88 companies that have reported results so far, 58 have beaten analysts’ estimates.

Nearly a third of the companies in the S&P 500 index will hand in their quarterly results this week, including such heavyweights as Apple on Tuesday, Boeing on Wednesday and Amazon on Thursday.

In other trading on Monday, benchmark U.S. crude oil rose $1.46 to $104.59 a barrel on the New York Mercantile Exchange. In the market for U.S. government bonds, the yield on the 10-year Treasury note slipped to 2.47 percent from 2.48 percent late Friday.

Among other companies in the news, Yum Brands fell $3.29, or 4.3 percent, to $74.13 amid a new food-safety scare in China. The operator of KFC and Pizza Hut restaurants said its stores in China stopped buying products from a Shanghai supplier, while local officials investigate allegations that the supplier repackaged old beef and chicken and stamped new expiration dates on them.

This article appeared in print on page 10 of the July 22nd, 2014 edition of Hamodia.