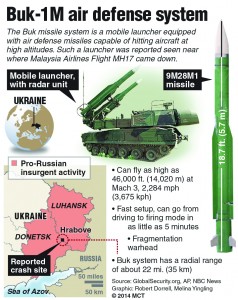 Video of a rocket launcher, one surface-to-air missing and leaving the likely launch site. Imagery showing the firing. Calls claiming credit for the strike. Recordings said to reveal a cover-up at the crash site.

“A buildup of extraordinary circumstantial evidence … it’s powerful here,” said Secretary of State John Kerry, a former prosecutor, and it holds Russian-supported rebels in eastern Ukraine responsible for shooting down Malaysia Airlines Flight 17, with the Kremlin complicit in the deaths of nearly 300 passengers and crew members.

In a round of interviews, Kerry cited a mix of U.S. and Ukrainian intelligence and social media reports that he said “obviously points a very clear finger at the separatists” for firing the missile that brought the plane down, killing nearly 300 passengers and crew.

“It’s pretty clear that this is a system that was transferred from Russia into the hands of separatists,” he said.

Video of an SA-11 launcher, with one of its missiles missing and leaving the likely launch site, has been authenticated, he said.

An Associated Press journalist saw a missile launcher in rebel-held territory close to the crash site just hours before the plane was brought down Thursday.

“There’s a buildup of extraordinary circumstantial evidence,” Kerry said. “We picked up the imagery of this launch. We know the trajectory. We know where it came from. We know the timing, and it was exactly at the time that this aircraft disappeared from the radar. We also know from voice identification that the separatists were bragging about shooting it down afterward.”

In one set of calls, said by Ukrainian security services to have been recorded shortly after the plane was hit, a prominent rebel commander, Igor Bezler, tells a Russian military intelligence officer that rebel forces shot down a plane. Shortly before Kerry’s media appearances, the U.S. Embassy in Kiev, the Ukrainian capital, released a statement saying experts had authenticated the calls.

A new set of recordings apparently made Friday also appears to implicate rebels in an attempted cover-up at the crash site.

In one exchange, a man identified as the leader of the rebel Vostok Battalion, Alexander Khodakovsky states that two recording devices are being held by the head of intelligence of the insurgency’s military commander. The commander is then heard to order the militiaman to ensure no outsiders, including an international observation team near the crash site at the reported time of the call, get hold of any material.

The man, identified as Khodakovsky, says he is pursuing inquiries about the black boxes under instructions from “our high-placed friends … in Moscow.”

U.S. aviation safety experts say they are especially concerned the site will be “spoiled” if it cannot be quickly secured by investigators. Based on photographs, they say it is a large debris field consistent with an in-flight explosion and the main evidence to be collected would be pieces of the missile.

Because the integrity of the plane and actions of the pilots are not an issue, the experts do not believe the flight recorders will yield much useful information.

U.S. and Ukrainian authorities have been at the forefront of accusations that the separatists, aided by Russia, are responsible, although other countries, including Australia and Britain have offered similar, if less definitive, assessments.

British Prime Minister David Cameron said in an unusual front-page piece in The Sunday Times that there is growing evidence that separatist-backed by Russia shot down the aircraft.

“If President [Vladimir] Putin does not change his approach to Ukraine, then Europe and the West must fundamentally change our approach to Russia,” Cameron wrote.

Putin and other Russian officials have blamed the government in Ukraine for creating the situation and atmosphere in which the plane  was downed, but have yet to directly address the allegations that the separatists were responsible or were operating with technical assistance from Moscow.


This article appeared in print on page 9 of the July 21st, 2014 edition of Hamodia.