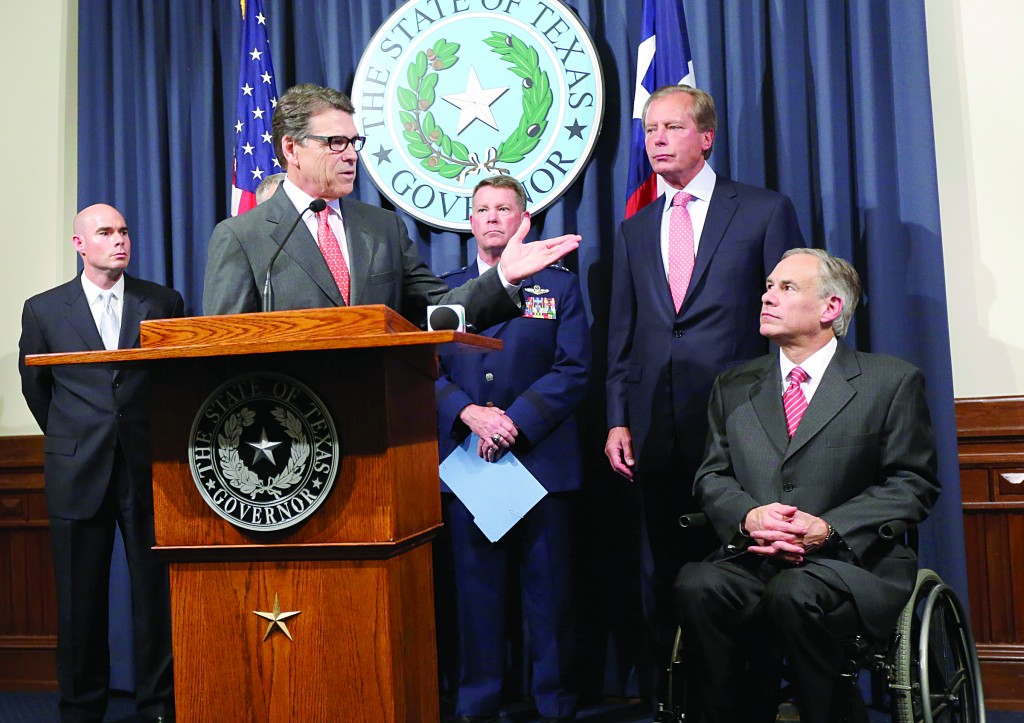 Gov. Rick Perry said Monday he is deploying up to 1,000 National Guard troops over the next month to the Texas-Mexico border to combat criminals that Republican state leaders say are exploiting a surge of children and families entering the United States illegally.

Perry, a vocal critic of the White House’s response to the border crisis — and who is mulling a second presidential run in 2016 — said the state has a responsibility to act after “lip service” from the federal government.

He rejected suggestions that Texas was militarizing local communities by putting National Guard troops on the ground or that crime data along the border doesn’t justify additional resources.

The deployment will cost Texas an estimated $12 million a month. Texas Adjutant General John Nichols said his troops would simply be “referring and deterring” immigrants and not detaining people — though Nichols said the National Guard could if asked.

“We think they’ll come to us and say, ‘Please take us to a Border Patrol station,” Nichols said.

More than 3,000 Border Patrol agents currently work in the region, and Perry has repeatedly asked Obama to send the National Guard to the border. Much of the area has been overwhelmed in recent months by tens of thousands of unaccompanied children illegally entering the U.S.

U.S. Customs and Border Protection didn’t respond to a request for comment Monday.

As governor, Perry is commander-in-chief of Texas military forces, unless those forces have already been mobilized by the White House. But if Perry deploys National Guard troops it is up to Texas to pay for them, while an order from Obama would mean Washington picks up the tab.

“Gov. Perry has referred repeatedly to his desire to make a symbolic statement to the people of Central America that the border is closed,” said White House spokesman Josh Earnest. “And he thinks that the best way to do that is to send 1,000 National Guard troops to the border. It seems to me that a much more powerful symbol would be the bipartisan passage of legislation that would actually make a historic investment in border security and send an additional 20,000 personnel to the border.”

President George W. Bush sent 6,000 National Guard troops to the border in 2006, and Obama eventually extended that deployment while ordering a second wave of National Guard forces to Texas, California, Arizona and New Mexico in 2010. But the second round saw reduced numbers of troops, and most of their work was limited to air patrols in counterdrug operations.

Since October, more than 57,000 unaccompanied children and teenagers have entered the U.S. illegally — more than double compared to the same period a year earlier. Most have been from Honduras, Guatemala and El Salvador, where rampant gang violence and intense poverty have driven tens of thousands of people outside their borders.

Their numbers overwhelmed Border Patrol facilities in the Rio Grande Valley, leading Perry and the Texas Department of Public Safety to argue that Border Patrol agents distracted by groups of children and families were leaving gaps. Most of those children have been turning themselves in to the first person in a uniform they see.