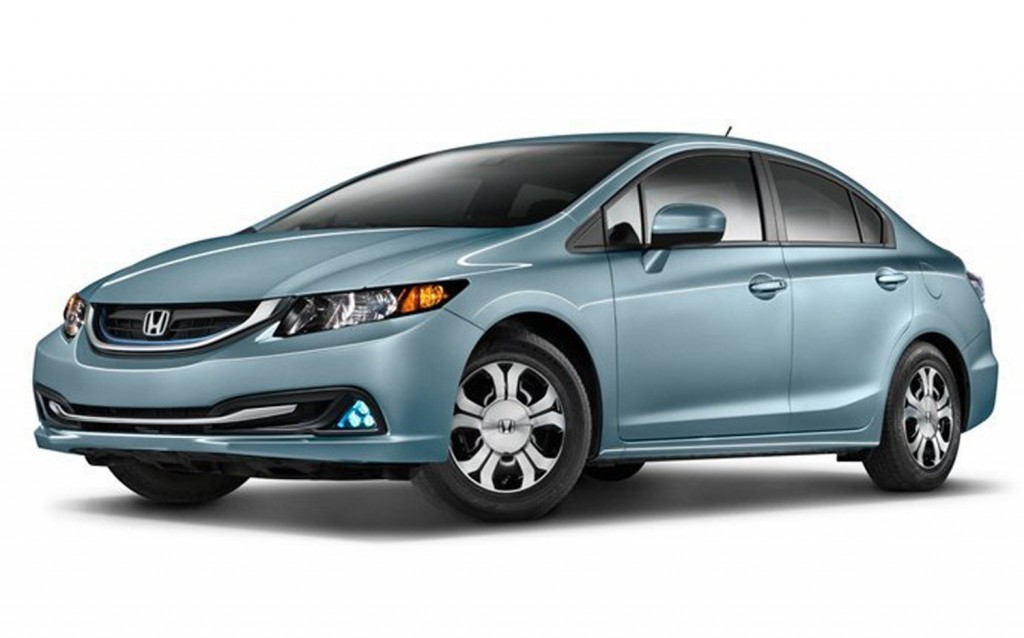 There’s also a model with navigation and no leather, for $26,135, and with leather and no navigation, for $25,835. No factory options are offered.

It’s a classy looking car, inside and out – quite an improvement over the Civic that first came to the United States in the early 1970s as a basic econo-box. If you were around back then, you’ll remember that Consumer Reports even rated the early Civic as “unacceptable,” based on its flimsy brakes.

Today’s Civic is just about as roomy as the larger Accord, and actually is as big as the Accord was just a few years ago.

Our test vehicle’s leather interior looked like it belonged in a premium car, but I suppose that with a price approaching $30,000, the Civic Hybrid is pushing the boundaries between economy and luxury.

Honda’s hybrid system is called Integrated Motor Assist, or IMA. The system in the 2014 Civic is the fifth generation IMA, and includes a 1.5-liter four-cylinder gasoline engine and 23 horsepower electric motor. Total output is 110 horsepower and 127 foot-pounds of torque.

A lithium-ion battery pack powers the electric motor, which kicks in during start-up and hard acceleration. It does not have to be plugged into an external outlet to be recharged; that occurs when the car is coasting or when the gasoline engine is running.

The hybrid comes with a continuously variable automatic transmission, which works better than a traditional transmission with the electric motor integration. There are no discernible shift points, but it also doesn’t unnecessarily rev up the engine, either, as some CVTs seem to do.

Under the hood of the regular Civic sedan gasoline models is a 140-horsepower, 1.8-liter four-cylinder engine, also connected to a CVT.

I’ve driven the Civic with both powertrains, and found the hybrid to have plenty of pickup for everyday driving. The electric motor helps make the hybrid feel as zippy as the regular Civic.

New for 2014 in the hybrid are a seven-inch touchscreen audio display, and an expanded-view driver’s outside mirror. With the new audio display, users can pinch, swipe and tap just like the screen on a tablet or smartphone to access audio, phonebook, media, vehicle information and navigation features.

The new display is also the interface for the next generation of HondaLink, the telematics system that connects a smartphone to the audio system for a variety of in-car connectivity options — including online and cloud-based content.

Standard is LaneWatch, which is a passenger-side blind-spot camera whose image shows up on the dash audio/navigation screen when the right-turn signal is activated. It shows the whole area to the right of the car, using a camera on the passenger-side outside mirror.

It clearly shows any traffic approaching from the rear in the right lane. You can see the side of the car from the mirror back. It’s a great help when trying to line up the car with the curb while parallel parking, but its greatest value is when moving into the adjacent lane or turning right.

Also now standard on the Civic hybrid is Honda’s Smart Entry system with pushbutton start. It allows for entry and engine starting without having to use a key.

Honda introduced the current generation of the Civic for 2012, but made more changes just a year later, giving the sedan bolder styling, a more-upscale interior and some extra standard amenities.

The leather front bucket seats are quite comfortable, even on a long drive, and there are plenty of storage spots throughout the cabin to help keep items such as cellphones and other gadgets organized and out of the way.

Automatic climate control is standard on the hybrid, as well – another amenity that’s surprising for a compact in the Civic’s class.

There’s adequate space for two adults in the rear seat; three in a pinch (literally), which is typical in this class. The rear outboard passengers have 37.1 inches of headroom and 36.2 inches of legroom. The middle seat is usable for a child or medium-sized adult, but has slightly less legroom.

I was surprised to find that the steering column had both tilt and telescopic controls – manual, of course, but here again is something often not included on vehicles in this class – as were the standard heated front seats. The steering wheel was leather-wrapped, and had built-in audio and cruise controls.

The driver’s seat also came with a height adjustment. Power windows and door locks are included, as are power/heated outside mirrors.

The Civic includes the LATCH system for child seats in the rear, and multiple air bags, including side curtains with rollover sensors for both rows, dual-stage front bags, and front-seat-mounted side bags with SmartVent technology.

Trunk space is 10.7 cubic feet, nearly two cubic feet less than that of the regular Civic sedan. The lost space is taken up by the hybrid’s battery pack.