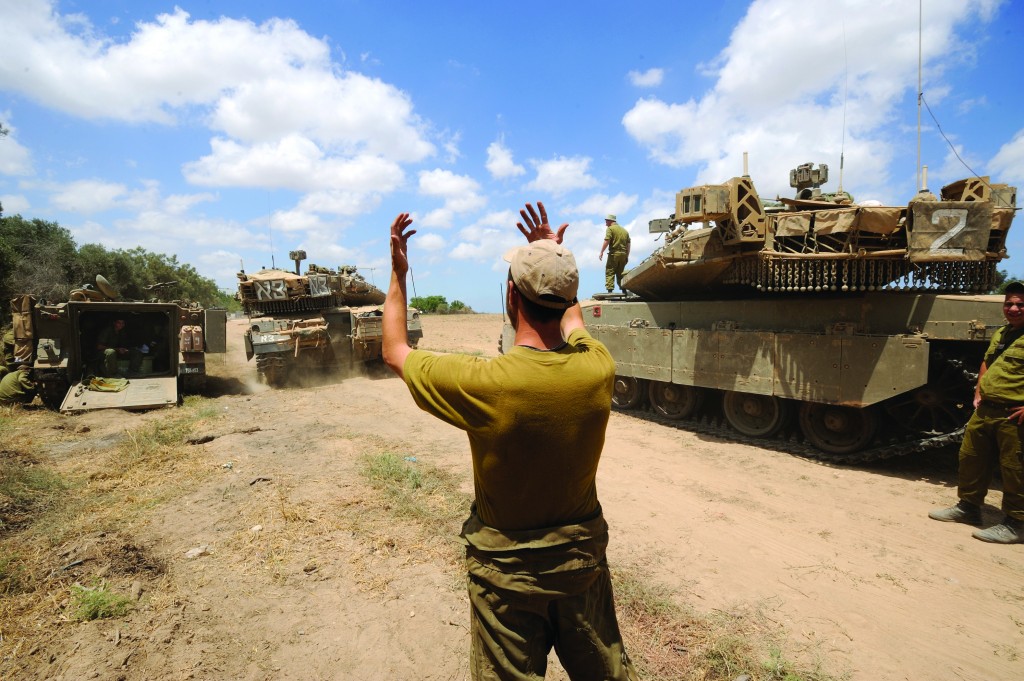 At a press conference held Sunday night Prime Minister Binyamin Netanyahu promised to complete the task of restoring calm to souther and central Israel and the rest of the country.
Netanyahu, flanked by Defense Minister Moshe Ya’alon, said that after Israel accepted three ceasefire offers, all of which had been rejected by Hamas, it now has international backing for the ground operation in the Gaza Strip.

Netanyahu expressed the deep grief of the nation over the IDF casualties: “The entire nation mourns with the families of the fallen. We bow our heads for our soldiers, who have fallen so that we could continue to live here, in our land. I wish to convey in the name of the Israeli government the deep pain we feel. We send our condolences to the parents, the children, the spouses, the families of IDF soldiers who have fallen in combat for the defense of the State of Israel. There is no war more just than the one in which your sons, our sons, have bravely fallen. We’ll restore calm across the country.”

Defense Minister Ya’alon has cautioned that there were still long days of fighting ahead, and declined to speak as of yet of a cease-fire.
On the diplomatic front, President Obama and Prime Minister Netanyahu spoke again Sunday morning by phone, to discuss the situation in Gaza. President Obama discussed Israel’s ongoing military operation, reiterated the United States’ condemnation of attacks by Hamas against Israel, and reaffirmed Israel’s right to defend itself. The President also raised serious concern about the growing number of casualties, including increasing Palestinian civilian deaths in Gaza and the loss of Israeli soldiers.
President Obama informed Netanyahu that Secretary of State John Kerry will soon travel to Cairo to seek an immediate cessation of hostilities based on a return to the November 2012 ceasefire agreement. The President underscored that the United States will work closely with Israel and regional partners on implementing an immediate ceasefire, and stressed the need to protect civilians—in Gaza and in Israel.
Meanwhile, the rocket fire has somewhat declined, but is still present; the IDF Spokesman says that 86 rockets were fired from Gaza at Israel thus far on Sunday, 16 of which were intercepted by Iron Dome.