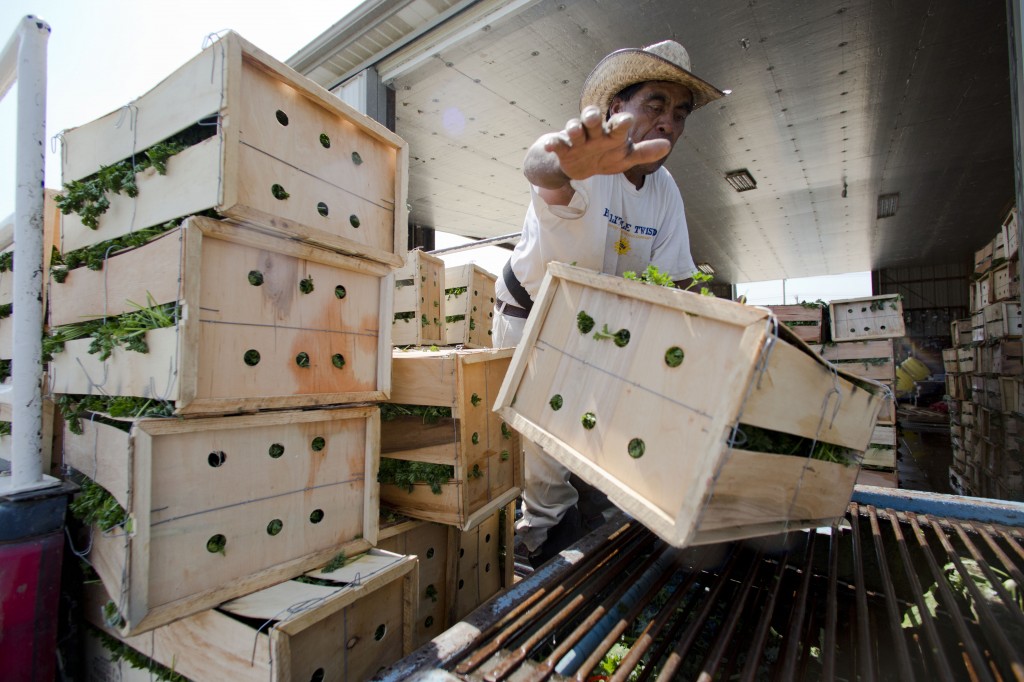 A growing network of companies and organizations is delivering food directly from local farms to major institutions like Thomas Jefferson University Hospital in downtown Philadelphia, eliminating scores of middlemen from farm to fork. Along the way, they’re increasing profits and recognition for smaller farms and bringing consumers healthier, fresher foods.

Over the past five years, with more than $25 million in federal aid, these so-called food hubs have helped transform locally grown foods into a bigger business, supplying hospitals, schools, restaurant chains and grocery stores, as consumer demand grows.

Major institutions like Jefferson have long relied on whatever giant food service companies provide, often processed foods that are delivered efficiently and are easy to heat and serve. But with a steady supply of locally grown food from the Common Market food hub, Jefferson now serves vegetables like bok choy and asparagus, creamy yogurts from Pennsylvania Dutch country, and omelets with locally sourced, cage-free eggs and spinach.

The model is simple: Common Market, a nonprofit, picks up food from 75 regional farmers and small food companies, and quickly turns it around in its Philadelphia warehouse. The food — everything from vegetables to turkey to tofu — is then sent to 220 city customers, along with detailed information about where it was grown or produced. There are about 300  similar food hubs around the country.

Shelley Chamberlain, of Jefferson’s dining services, says the hospital hopes to eventually source 10 percent of its food from Common Market. The items can be a bit more expensive, and take more labor and training to cook, but Chamberlain says it’s worth it to serve healthier foods.

Dawn Buzby, of A.T. Buzby Farm in Woodstown, New Jersey, says it’s a movement toward “farm to institution.” Three times a week, Common Market picks up tomatoes, sweet corn, eggplant, cantaloupes and other produce from her farm, and sells the food in Philadelphia, 35 miles away.

She says Common Market is helping her business get urban name recognition. “People are just becoming so interested in their food and where it comes from,” Buzby says. “I only see it getting better.”

It’s a cultural transformation for the agriculture industry — and the Agriculture Department — which has long been focused on the biggest farms and staple crops like corn and soybeans. Most fruits and vegetables are shut out of major subsidy programs, as billions of federal dollars flow to large growers.

USDA has upped its commitment to building small farms and locally grown food with a program started in 2009, called “Know Your Farmer, Know Your Food.” Boosting food hubs like Common Market has been one of its priorities. There isn’t good data yet on locally grown food sales, but USDA says it has touched almost 3,000 separate projects.

“It’s all designed to reconnect people with the food that they consume, so that there is a better appreciation, a greater appreciation, for the amazing story of American agriculture, regardless of what production system you favor, or what sized operation you have,” he says.

Haile Johnston says he co-founded Common Market in 2008, after seeing how little farmers were making at wholesale, and how much customers were paying for the same foods in the city.

“The two anchors of the chain, the producers and consumers, are really the most marginalized in this system,” he said.

Johnston says hospitals like Jefferson, along with schools, were a part of their model from the start, because they could be a steady source of business and serve a large number of low-income people who may not have much access to produce.

In 2008, Common Market generated $125,000 in sales. This year, the organization is set to surpass $2.5 million — all money reinvested into the nonprofit. Last year, Common Market received a $300,000 USDA grant, designed to improve access to healthier foods in low-income communities.

USDA has helped these hubs, and farmers that supply them, with research dollars, technical support, microloans, infrastructure such as hoop houses for winter growth, and help buying equipment.

In Mississippi, Wal-Mart has started buying purple hull peas — similar to black-eyed peas — directly from farmers in the Mississippi Delta, a deal cemented with USDA help. One of the farmers, Charles Houston, says the checks from Wal-Mart have helped many of his area’s small farms survive, paying for new irrigation and infrastructure.

Wal-Mart, the nation’s largest retailer, pledged to double its share of locally grown foods between 2009 and 2015.

Consumers are continuing to want more of it. Consumer and market research company Hartman Group found that nearly a third of consumers bought more local products than in the previous year.

Dan Carmody of Detroit’s Eastern Market says he compares local foods to the craft brew industry — once on the sidelines, it’s now making a dent in the country’s beer sales.

“You see the same thing happening in food,” he says. “It’s really changing the narrative.”