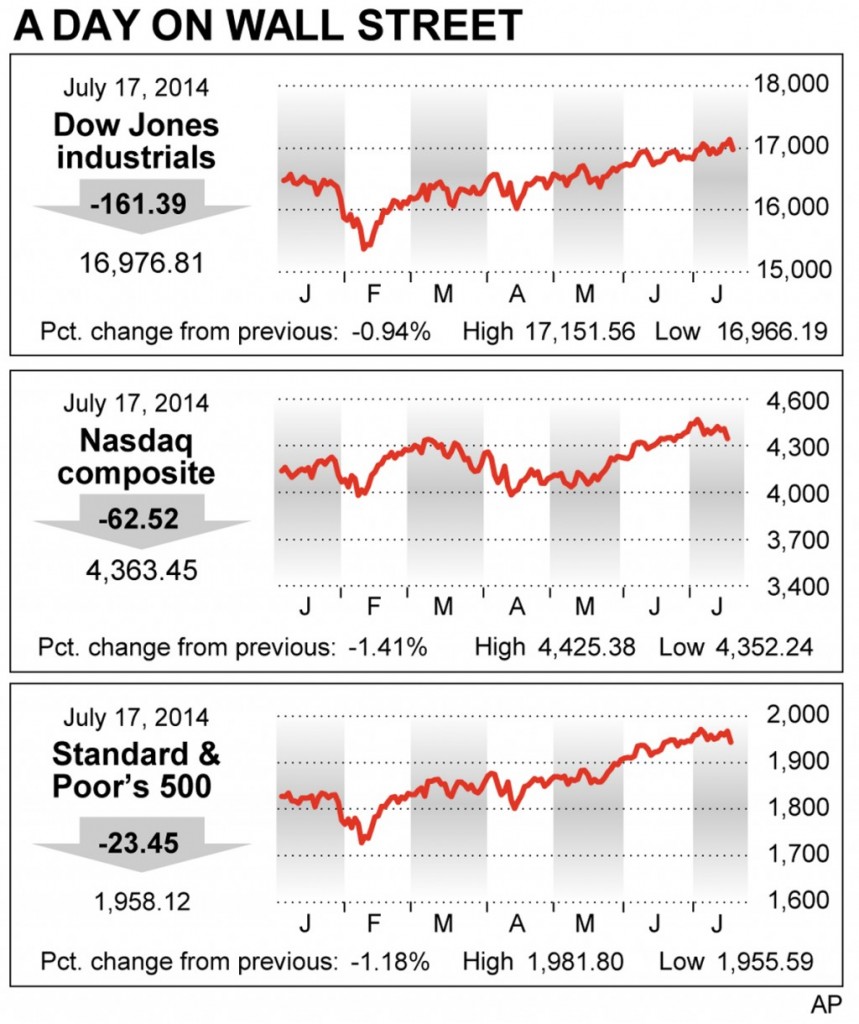 The downing of a plane flying over Ukraine rattled U.S. financial markets Thursday, deepening a slide set off by a batch of disappointing company earnings and a weak home construction report.

All three major stock indexes ended lower for the first time in a week, but remained near record highs and positive for the year.

Ukrainian officials said a Malaysia Airlines passenger plane carrying 295 people was shot down over war-torn eastern Ukraine, although both the government and pro-Russia separatists fighting in the region denied responsibility. The situation raised concerns of wider geopolitical instability and an escalation of tensions between Russia and the West.

Investors responded by seeking refuge in U.S. government bonds. The yield on the 10-year Treasury note fell to its lowest level since May. Gold and oil prices rose.

Earlier Thursday, stock futures were down before the market opened as investors pored over the latest earnings and other news.

A pair of government reports pointed to an uneven U.S. recovery. The number of people seeking unemployment benefits fell last week, but home construction fell in June to the slowest pace in nine months, clouding the outlook for the housing recovery.

“The housing starts numbers were weak, but housing has been incredibly volatile,” said Randy Frederick, managing director of trading and derivatives at the Schwab Center for Financial Research. “They were definitely disappointing.”

Stocks opened lower, but then drifted between small gains and losses, with the Dow inching briefly into positive territory.

That budding comeback stalled at midmorning when news broke of the downed plane.

SanDisk fell the most of the 500 stocks in the index, losing 13.6 percent after the flash memory maker issued a disappointing outlook. The stock fell $14.62 to $93.21.

The Dow closed at a record high on Wednesday, its second this month, and the S&P 500 is hovering near its most recent all-time high of 1,985.44 set on July 3.

That may have encouraged investors to sell some of their stock holdings Thursday, said Darrell Cronk, deputy chief investment officer for Wells Fargo Private Bank.

“It’s more of some position-squaring and a little bit of profit-taking over the next couple of days as we continue to set new highs,” Cronk said.

Even with growing geopolitical uncertainty, the market has remained focused on company earnings, mostly favorable so far.

On Thursday, however, many companies disappointed.

AutoNation’s second-quarter earnings rose 12 percent, but fell short of expectations. The stock of the nation’s largest auto dealership chain fell $5.01, or 8 percent, to $55.82.

Mattel fell $2.57, or 7 percent, to $36.46 after it reported that its income plunged 61 percent in the second quarter, weighed down by costs tied to its acquisition of Mega Brands.

Yum Brands shares slid $5.70, or 7 percent, to $77.01 after the operator of Taco Bell, Pizza hut and KFC reported higher second-quarter earnings but also sluggish sales in the U.S. at Pizza Hut and KFC chains.

— Microsoft rose 45 cents, or 1 percent, to $44.53 after announcing early Thursday that it will eliminate up to 18,000 jobs. over the next year as it works to integrate the Nokia business it bought in April.