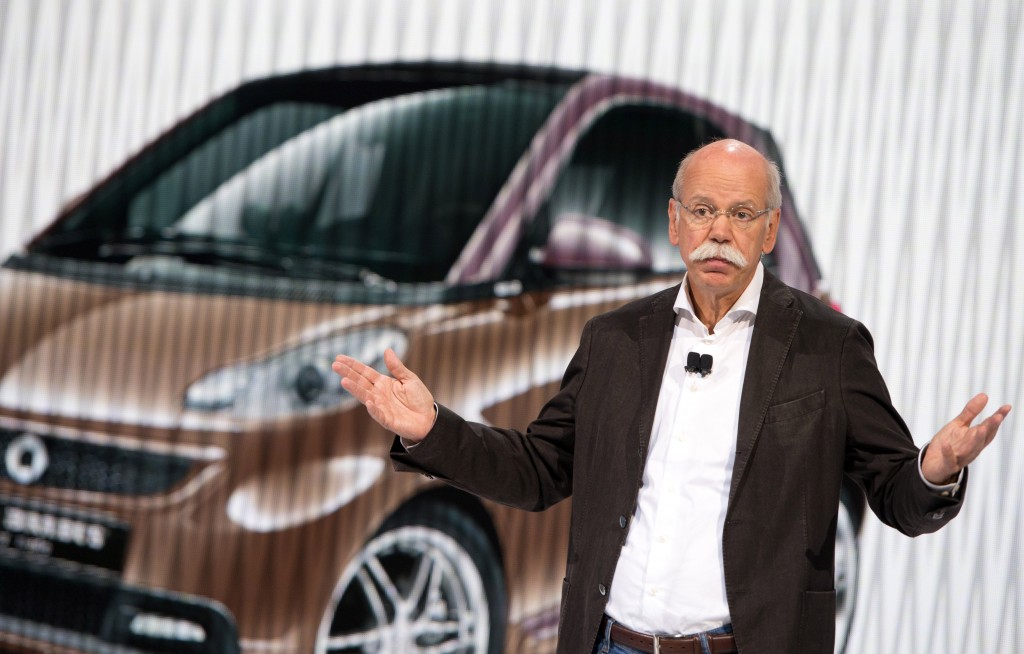 Germany’s Daimler AG unveiled a new version of its tiny, two-seat Smart model Wednesday, in hopes the car won’t just get admiring glances with its unusual design, but make a bigger contribution to profits as well.

The new version is the same length as its predecessor at only 2.7 meters, or 8 feet 10 inches, and keeps its two-tone color scheme. It is slightly wider with a somewhat different silhouette – the new model has a short front hood where the old model had none, the front end sloping directly down from the windshield.

The company says the new Smart — the third version, and the first since 2007 — has stronger business prospects because it shares many parts with Daimler partner Renault’s Twingo. That should mean lower costs per vehicle due to higher purchasing volumes for parts.

The car, first sold in 1998, was conceived as stylish, high-tech urban transport. So small that it can be parked nose-in to the curb in crowded European cities, the Fortwo had advanced features such as a turbocharged engine, computer-controlled gearbox, stability control and a safety cell that shielded the occupants in case of an accident.

Yet those features raised costs, while the lack of back seats limited demand among some consumers. A four-seat Forfour version bore little resemblance to the chic Fortwo, missed out on reflected cachet, and was cancelled. But on Wednesday, the Fourfour was brought back, this time with a recognizable resemblance to the Fortwo.

Daimler doesn’t break out separate earnings for Smart, which is part of its Mercedes division. The company said in a statement Wednesday that “even today, we are earning money with every Smart sold” and that cooperation on the new models with partner Renault means “we are going to achieve a significantly improved business case.”

Analysts at Sanford C. Bernstein last year listed the original Smart among the top 10 lossmaking cars of modern times in Europe, saying the first version cost Daimler 3.35 billion euros, or about $4.53 billion at today’s exchange rate, in losses over its model cycle. At the time, they said, “We’re not convinced the current one makes money either.”

The new model “is a very, very important step,” said Ferdinand Dudenhoeffer, director of the CAR-Center Automotive Research at the University of Duisburg-Essen. “Now they have the chance to make Smart profitable… If this attempt does not work, nothing will.”

Tim Urquhart, principal analyst at IHS Automotive, said the common platform improves the car’s chances of commercial success. “They’re basically getting three vehicles for the price of one,” he said. “You’re looking at huge improvements in economies of scale – a huge improvement in purchasing components, for example. All of that would point to a much more viable proposition than it was previously.”

He added, “If this doesn’t work, the future for the brand will not be looking very good.”

The cars will go on sale in November in Europe and next year in the United States.