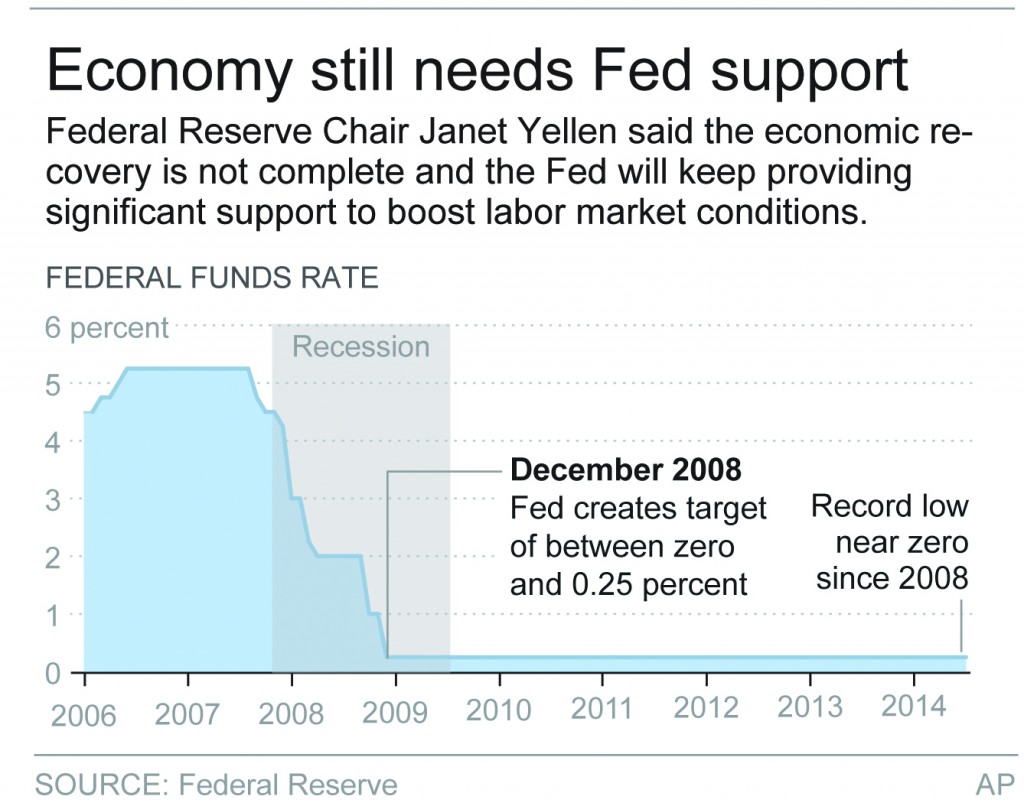 Federal Reserve Chair Janet Yellen said Tuesday that the economic recovery is not yet complete and the Fed therefore intends to keep providing significant support to boost growth and improve labor-market conditions.

In delivering the Fed’s semi-annual economic report to Congress, Yellen said the Fed’s future actions will depend on how well the economy performs. She said that if labor-market conditions continue to improve more quickly than anticipated, the Fed could raise its key short-term interest rate sooner than currently projected. But she said weaker conditions would mean a longer period of low rates.

Many economists believe the federal funds rate, which has been at a record low near zero since December 2008, will not be increased until next summer. Yellen said current monthly bond purchases will likely end in October.

In her testimony before the Senate Banking Committee, Yellen said the economy is improving and the sharp downturn in economic activity in the first three months of the year was likely the result of temporary factors.

“Although the economy continues to improve, the recovery is not yet complete,” she said. Even with a drop in the unemployment rate to the lowest level since September 2008, Yellen said there were numerous signs of significant slack in the labor market, including continued weak growth in wages.

She also played down a recent acceleration in inflation, noting that inflation still remained below the Fed’s 2 percent target. Prices were up 1.8 percent for the 12 months through May.

Because labor-market conditions have not yet fully recovered from the deep 2007-2009 recession and because inflation remains below target, Yellen said the Fed expected to continue with its current policies of keeping interest rates exceptionally low to boost economic activity.

“We judge that a high degree of monetary policy accommodation remains appropriate,” Yellen said in her testimony.

In answering questions, Yellen said that while the drop in the unemployment rate was encouraging, it was too soon for the Fed to begin raising interest rates, given past periods in this recovery in which hopeful signs of an acceleration in economic activity fizzled out.

With its key short-term interest rate already as low as it can go, Yellen said the Fed had no margin for error.

“The Federal Reserve does need to be quite cautious with respect to monetary policy. We have, in the past, seen sort of false dawns, periods in which we thought our growth would speed, pick up and the labor market would improve more quickly, and later events have proven those hopes to be unfortunately over-optimistic,” she told the committee. “We need to be careful to make sure that the economy is on a solid trajectory before we consider raising rates.”

Yellen was scheduled to testify twice this week, before the Senate panel on Tuesday and the House Financial Services Committee on Wednesday. She delivered her first monetary report to Congress in February, just a week after being sworn in to succeed Ben Bernanke as the first woman to head the central bank.

While unemployment stood at 6.7 percent in February, it has now fallen to 6.1 percent, reflecting strong job growth in recent months. The economy has created an average of more than 200,000 jobs a month over the past five months, the strongest stretch since the late 1990s.

Yellen’s remarks Tuesday echoed her recent comments that while jobs are now being produced at a faster clip, the economy still needs the Fed’s help in the form of low interest rates because a variety of indicators, from a still-high number of long-term unemployed to weak wage growth, show continued economic stress.

The Fed’s twin goals are to promote maximum employment while keeping inflation under control.

Critics have argued that the Fed needs to be more worried that the prolonged period of low interest rates could be setting the stage for possible bubbles in asset prices, such as stocks or real estate, that could deflate rapidly, creating market instability once the Fed begins raising interest rates.

In her testimony, Yellen said Fed officials were aware that low interest rates could prompt investors to “reach for yield” by chasing riskier investments, and this could “increase vulnerabilities in the financial system to adverse events.” But Yellen said that while prices of real estate, stocks and corporate bonds have risen appreciably, “they remain generally in line with historic norms.”

Yellen said that the Fed is debating the best way to unwind its massive holdings of Treasury bonds and mortgage-backed securities, which are approaching $4.5 trillion, more than four times the amount on the balance sheet when the financial crisis struck in the fall of 2008. The Fed’s bond purchases were aimed at keeping long-term interest rates low to give the economy a boost. She said the central bank expects to produce additional information in its exit strategy later this year.

The minutes of the Fed’s June meeting showed that the Fed had a lengthy discussion on just how it planned to accomplish that reduction in its balance sheet.