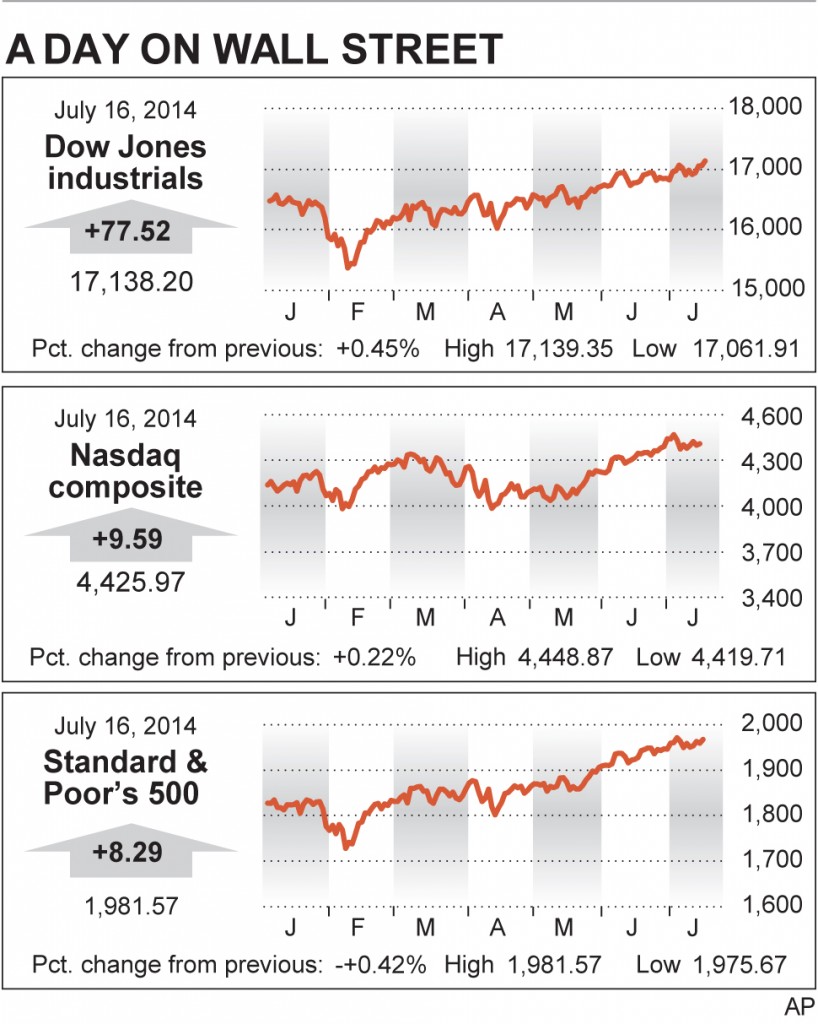 Investors had lots of market-moving news to consider, including encouraging corporate earnings from Intel, a higher profit forecast from hospital operator HCA Holdings and a pickup in U.S. homebuilders’ confidence.

Trading appeared to get the biggest jolt from the latest batch of corporate deal news.

“It’s a continuation of what we’ve really been seeing this year, and it’s almost a record amount of [mergers and acquisitions] going on,” said David Chalupnik, head of equities at Nuveen Asset Management.

Investors also got a dose of good news about housing. A key index of U.S. homebuilders’ confidence in the housing market surged to its highest level since January and indicated that builders are more optimistic about selling homes in the second half of the year.

The major stock indexes opened slightly higher, led by the tech-heavy Nasdaq, and remained in positive territory the rest of the day.

Cheap financing and a tough global economy have made acquisitions an attractive option for companies to expand their business.

The value of U.S. corporate deals has surged 80 percent to $1.02 trillion so far this year from $563 billion in the same period a year ago, according to Dealogic.

Apart from corporate deals, investors had their eye on earnings.

Intel rose $2.94, or 9.3 percent, to $34.65. The chipmaker reported late Tuesday that earnings jumped 40 percent in the latest quarter, beating expectations, as companies picked up the pace of office PC replacement.

HCA Holdings jumped 10.5 percent after the hospital operator said its second-quarter financial results will be better than expected. It also raised its full-year outlook. The stock rose $5.78 to $60.99.

Among other stocks making news Wednesday:

– Bank of America fell 30 cents, or 1.9 percent, to $15.51 after reporting second quarter earnings that were hit by higher litigation expenses. The Charlotte, North Carolina-based bank earned 19 cents per share compared with 32 cents a year ago.