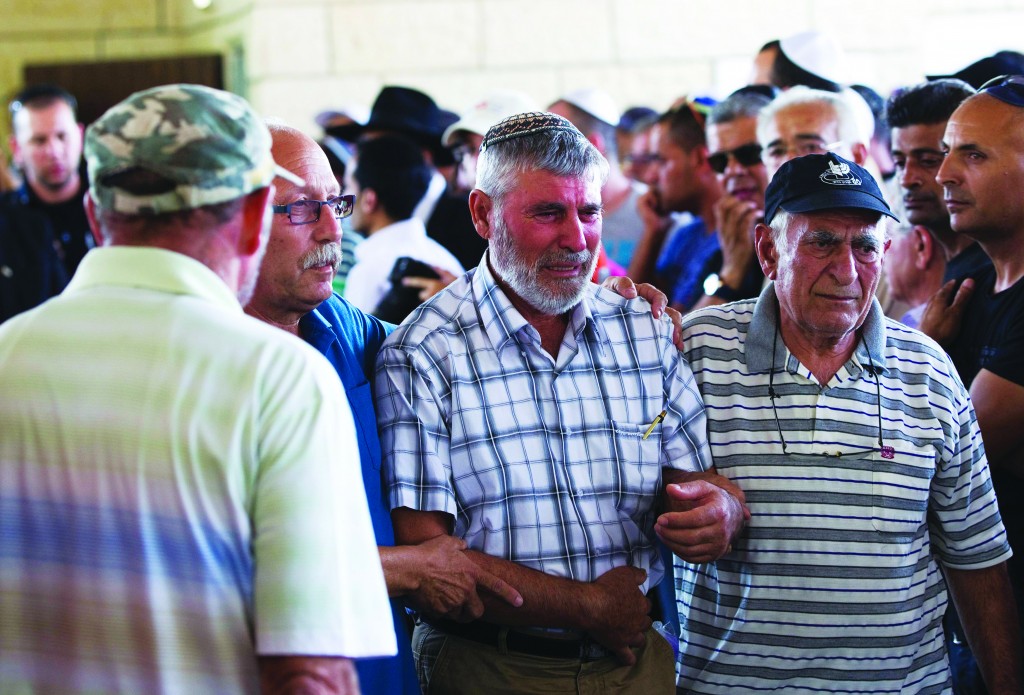 Israel endured a day of non-stop rocket fire from Gaza, Wednesday, after Hamas again rejected the Egyptian proposal to declare a ceasefire. Behind the scenes, talks mediated by Egypt are being held and, despite the onslaught of rockets, the IDF is reducing the scope of its strikes as it awaits final word from Cairo as to whether it is giving up its mediation efforts. Only then will Israel decide how to proceed further.

The IDF began a callup of 8,000 more reserves on Wednesday, which will bring the total mobilization to 56,000, on the same day that Hamas officially rejected the Egyptian ceasefire proposal and fired nearly 100 rockets into southern Israel, including seven at Ashdod and 19 at Ashkelon.

One rocket hit a school in Ashdod, another a home in Ashkelon. B’chasdei Shamayim, no injuries were reported in those attacks.

Dror Hanin, a 38-year-old father of 3 from Beit Aryeh who was killed Tuesday by a terrorist rocket as he distributed food and gifts to soldiers on reserve duty, was buried in Yehud on Wednesday afternoon.

Yossi, his brother, eulogized him: “The terrorists who took you from us today made a huge
deal,” he said. “They did not kill one person; they murdered a whole world.”

Israel agreed on Wednesday night to a six-hour unilateral cease-fire to allow humanitarian assistance to enter the Gaza Strip, at the request of the United Nations. It will be implemented on Thursday between 10 a.m. and 3 p.m.

Although a decision to launch a ground offensive into Gaza has apparently not been made, pressure mounted on the government to order one, and the military continued preparations.

Even the coalition’s leading dove, Justice Minister and former chief negotiator with the Palestinians, Tzipi Livni, told reporters on Wednesday that if the rockets don’t stop, the army will have to cross the border into the Hamas enclave in order to root out the terrorist infrastructure. Livni made the comment after the additional reserve callup was authorized by the cabinet via a phone vote.

Foreign Minister Avigdor Lieberman reiterated his position that there was no other choice.

“Only a full ground  incursion in Gaza will secure a peaceful summer for our children in the South,” he said.

“What I understand from the international community over the years is that it has wanted Israel to go back to the 1967 lines,” he stated, “Which we did.”

“There’s no argument, we want to ensure citizens’ security. We’re not trying to build towns there [in Gaza], we just want security,” Lieberman stressed.

The military has other options besides a full-scale invasion, however.

“The direction now is to continue air strikes and, if need be, enter with ground forces in a tactical, measured manner,” an Israeli official said after the security cabinet met Tuesday night.

Cross-border incursions to locate and destroy tunnels used for terrorist purposes is one possibility. But it, too, faces the risk of booby traps and ambushes.

Maj. Gen. (res.) Amos Yadlin, a former commander of IDF Intelligence, said a crackdown on the tunnels was urgent, calling them “the second-most serious threat after the long-range rockets — or the primary threat, according to some.”

Yadlin, who now heads the Institute for National Security Studies (INSS) think tank at Tel Aviv University, played down the operational risk to Israel. “The tunnels cannot be tackled except from the Palestinian side, but they are in relatively uninhabited areas,” he said. “We would not have a problem maintaining control. I don’t accept the argument that this would be a sinkhole back into Gaza.”

Meanwhile, cross-border commando operations have been carried out throughout the nine days of Operation Protective Edge, Ynet reported. Part of that activity came to light when four soldiers of the elite Shayetet 13 unit were reported injured last week, otherwise the operations remain covert.

Israel once again dropped hundreds of thousands of flyers above northern Gaza neighborhoods, but it does not seem as though many residents heeded the calls to leave their homes.

Israel is also investigating a Hamas complaint that fire from a warship off the coast of Gaza caused the death of four Palestinian children who were on the beach.

Throughout the day yesterday, terrorists fired more than 150 rockets and mortars into Israel. Of them, 36 were intercepted. The IDF conducted air strikes on 170 terror targets.

Since the beginning of Operation Protective Edge, 1,800 terror targets have been hit, of them more than 730 rocket launchers, 140 military camps and 110 senior operatives. In addition, 235 strikes targeted tunnels throughout the strip. Since the beginning of the operation, Iron Dome has intercepted 160 missiles headed for population centers in Israel.

At a joint news conference with Italian Foreign Minister Federica Mogherini at the Knesset on Wednesday, Israeli Prime Minister Binyamin Netanyahu called on the international community to condemn Hamas for committing the “double war crime” of firing on Israeli civilians and using Palestinian civilians as human shields.

He also said that the “most important step for the international community to insist on” is “the demilitarization of Gaza.”

Turning to the Italian foreign minister, Netanyahu said, “Imagine in Rome, Florence, and Milan were rocketed. You wouldn’t accept that. You’d fight back. Those firing the rockets aren’t seeking a political solution.”

Mogherini commended Netanyahu for accepting the ceasefire but also expressed concern over civilian casualties in Gaza.

In the Knesset on Wednesday, Arab MK Basel Ghattas (Balad) led a moment of silence for those killed in Operation Protective Edge.

According to Palestinian sources, over 200 have died in the IDF attacks.

However, as the Committee for Accuracy in Middle East Reporting in America (CAMERA) pointed out this week, many of those reported dead are likely terrorists belonging to Hamas and other terrorist groups, such as Islamic Jihad.

In a study analyzing Al-Jazeera’s list of Gazan casualties, it said, a close look at the data “shows that, as in past hostilities, the fatalities are disproportionately [compared to the overall population] among young males, which corresponds with the characteristics of combatants. Males over 40 years old are also disproportionately represented. Some of the fatalities in those over 40 years of age likely represent senior members of terrorist organizations.”

(With reporting by Yisrael Price)