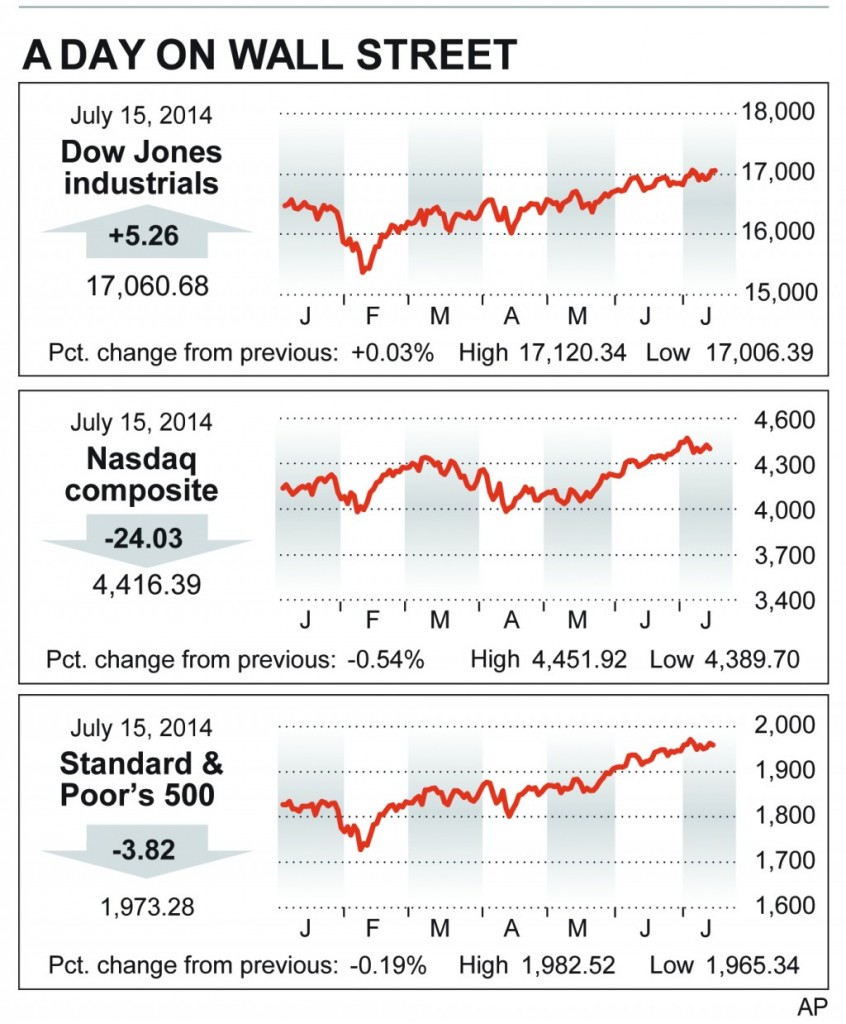 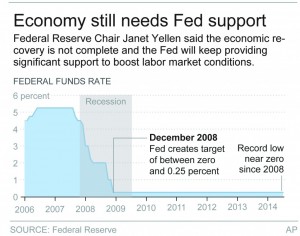 The Federal Reserve’s latest take on the U.S. economy put many investors into sell mode Tuesday, sending stocks mostly lower after a brief upward turn early in the day.

Fed Chair Janet Yellen, speaking before Congress, said the U.S. economy has yet to recover fully, but raised the possibility the central bank could raise its key short-term interest rate sooner than currently projected.

The Fed also issued a report noting that valuations for stocks in some sectors, such as social media and biotech firms, appear to be stretched, sending shares in Facebook, Twitter and LinkedIn lower.

By suggesting some stocks could be overvalued, the Fed is adding to a growing belief among some market watchers that stocks are due for a pullback, said Drew Wilson, an equity analyst at Fenimore Asset Management.

“In this type of environment, when you have a lot of uncertainty, essentially you have this equilibrium that’s looking to be broken one way or another, and the Fed chair saying ‘financial bubble’ could do that,” Wilson said.

Investors had plenty more to consider, including a mostly encouraging batch of corporate earnings and economic data.

But stock indexes diverged shortly after the market opened and then fully veered into the red about an hour into regular trading as investors began to tune into Yellen delivering the central bank’s semi-annual economic report to Congress.

Stocks finished the day mixed, with the Dow Jones industrial average eking out a tiny gain on the day.

Yellen told Congress that the Fed intends to keep providing significant support to the U.S. economy to boost growth and improve labor market conditions, noting that the economic recovery is not yet complete.

“In light of corporate earnings being good, retail sales being good, manufacturing being good, even a data-driven Fed chairman is going to have to raise rates earlier than the market really wants,” said Doug Cote, chief market strategist at Voya Investment Management. “So all the good fundamental data that should be good for the markets is also hawkish for rates.”

Beyond the Fed, investors are mostly focused on company earnings this week, including quarterly reports from Bank of America, eBay and Yum Brands on Wednesday.

Bank earnings on Tuesday set a good tone for the latest earnings season.

JPMorgan, the nation’s largest bank by assets, said its second-quarter earnings fell 9 percent as revenue at its investment banking and mortgage businesses dropped. The stock gained $1.98, or 3.5 percent, to $58.27. Goldman’s profit rose 5 percent, helped by record results from investment banking. Goldman gained $2.17, or 1.3 percent, to $169.17.

Shares in rent-to-own retailer Aaron’s tumbled 9.5 percent after the company cut its profit and revenue outlook for the second quarter, partly citing performance of its core business. The stock shed $3.19 to $30.34.

Among other stocks in the news Tuesday: