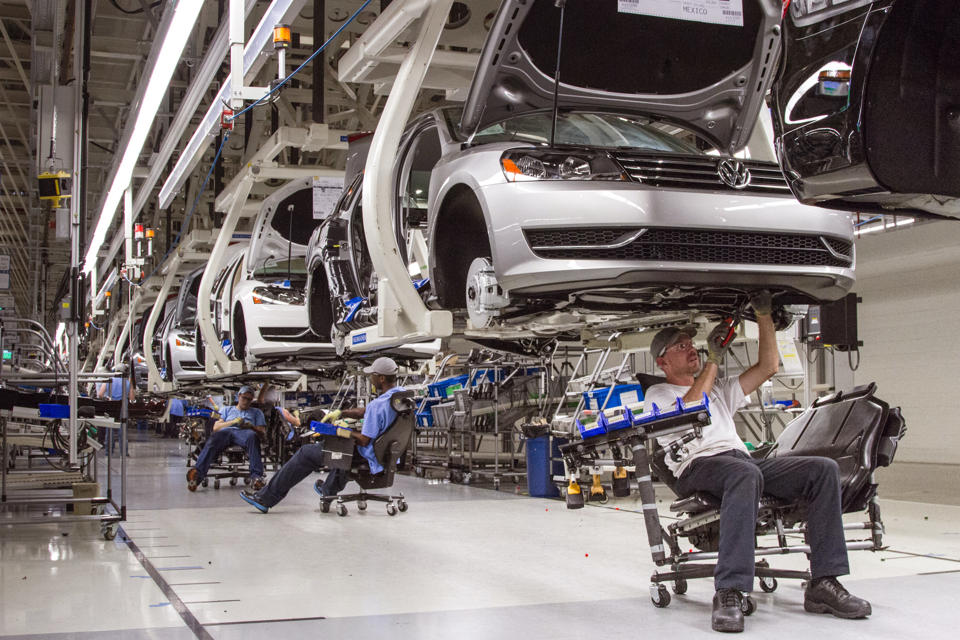 Volkswagen plans to build a new seven-passenger SUV at its factory in Chattanooga, Tennessee, adding about 2,000 factory jobs as it tries to reverse U.S. sales that have fallen for the past two years.

The German automaker announced Monday that it will invest $600 million to expand the factory and set up a new research center that will employ about 200 engineers. The research facility will coordinate products for North America to quickly include customer feedback into planned and existing models, the company said.

The announcement comes after months of political wrangling over the role of organized labor at the factory, which now employs about 2,400 workers and makes only one model, the Passat midsize car.

Production of the new SUV, based on the CrossBlue concept vehicle unveiled in Detroit last year, is scheduled to start at the end of 2016. It gives VW an entry into an important segment of the U.S. market — the family people hauler.

VW sales fell almost 7 percent last year and are down more than 13 percent so far this year, largely because the company doesn’t have competitive products in key market segments. VW had a big year in 2012, with sales rising 35 percent to more than 438,000. But sales fell to about 408,000 last year, and the brand sold only 179,000 through June this year.

“The Volkswagen brand is going on the attack again in America,” Martin Winterkorn, chairman of Volkswagen AG’s management board, said in a statement, repeating the goal of selling 800,000 Volkswagen-brand vehicles in the U.S. by 2018.

The company plans to add about 538,000 square feet to the existing factory to build the new SUV.

Negotiations over state incentives for the expansion of the plant hit a snag over a union vote at the plant in February that was narrowly lost by the United Auto Workers. Republican politicians had warned that a vote for the union could have hurt the chances of the legislature approving more than $300 million in incentives.

The new incentive package wasn’t announced Monday, and it’s unclear whether ongoing attempts by the UAW to be recognized at the plant will affect legislative approval of the deal.

David Smith, spokesman for Gov. Bill Haslam, said there’s no need for a special legislative session to approve the incentives. The state, he said, is providing a $165.8 million grant to help with site development, infrastructure, production-equipment acquisition and installation, and building construction. It also is offering a $12 million grant for training new employees, he said.

Lawmakers aren’t scheduled to return to session until January, and the matter likely will be taken up at that time.

State House Majority Leader Gerald McCormick, a Chattanooga Republican who has been a vocal critic of the UAW organizing effort at the plant, said he doesn’t expect the incentive package to face major obstacles.

VW wants to create a German-style works council representing both salaried and hourly employees, but can’t do so without the involvement of an independent union.

UAW leaders announced last week that they had reached a “consensus” in discussions with Volkswagen and expect the automaker to recognize the union if they sign up enough workers at the plant.

Sen. Bob Corker (R-Tenn.), a leading opponent of the union’s organizing bid in Chattanooga, insisted that potential UAW organizing attempts remain a stumbling block for auto companies when assessing whether to build or expand plants across the country.

“The UAW does cause companies to pause” when making decisions, said Corker, suggesting that the GOP-led political opposition to the UAW in Chattanooga remains strong.

In February, the union suffered a bitter setback in its effort to organize its first foreign-owned plant in the South when workers at the Chattanooga plant rejected UAW representation by a 712-626 vote.

UAW Secretary-Treasurer Gary Casteel said last week he is confident VW will recognize the union if it signs up a “meaningful portion” of Volkswagen’s workforce in Chattanooga, though he did not elaborate on what the threshold would be.

Volkswagen spokesman Scott Wilson issued a statement saying that the company has “no contract or other formal agreement with UAW on this matter.”

“Just like anywhere else in the world, the establishment of a local organization is a matter for the trade union concerned,” the company said.

Also Monday, Volkswagen AG announced that Bernd Osterloh, chairman of the company’s works council representing workers, will join the company’s board of directors.