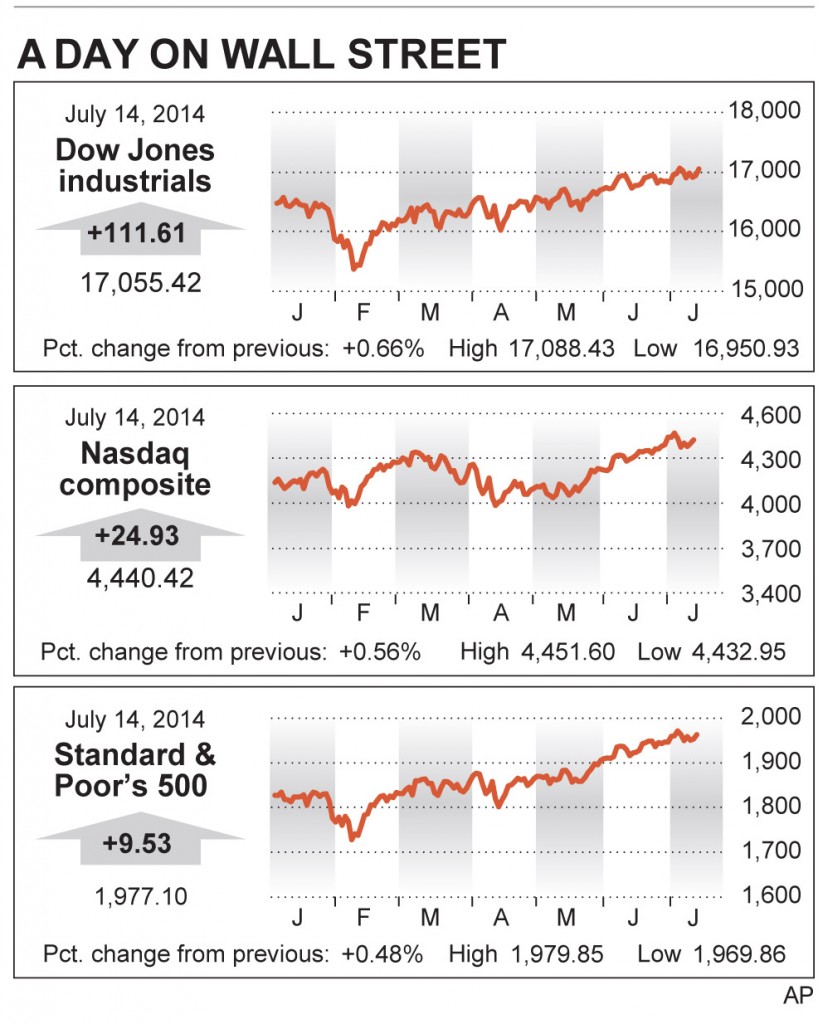 Stocks shook off last week’s doldrums and finished sharply higher Monday, driven by a round of corporate deal news and strong earnings from Citigroup.

Citigroup rose 3 percent after the bank turned in better-than-expected results and disclosed it has agreed to pay $7 billion to settle a federal probe into its mortgage securities business. JPMorgan Chase & Co. and Goldman Sachs, due to report earnings Tuesday, also got a lift.

All told, the three major stock indexes notched their second gain in two days. That’s a turnaround from last week, when the Standard & Poor’s 500 index lost 0.9 percent, its worst showing since April.

On Monday, investors appeared to be reassured any problems would be contained.

“Investors are saying if this Portugal thing really isn’t significant from an impact standpoint, and the earnings are coming in good … stocks ought to be going higher,” said Phil Orlando, chief equity strategist at Federated Investments.

The major indexes rose in premarket trading as investors digested Citigroup’s earnings. They opened in the green and held steady through the entire session.

Nine of the 10 sectors in the S&P 500 rose, led by energy stocks. Utilities fell the most.

The yield on the 10-year Treasury note rose to 2.54 percent from 2.52 percent late Friday.

With the market trading near all-time highs, investors will be focused this week on a large number of corporate earnings, including quarterly reports from General Electric, Google, Bank of America and Johnson & Johnson.

“We got started off with a very good report out of Citibank this morning,” Orlando said. “And economic news this week — retail sales, capacity utilization, housing data, confidence data — is all supposed to be pretty good.”

Recent data point to an improving U.S. economy after a slow start this year.

That momentum is helping drive corporate deals. On Monday, generic drugmaker Mylan said it agreed to buy Abbott Laboratories’ generic-drug business in developed markets for $5.3 billion. Mylan’s stock added $1.04, or 2.1 percent, to $51.24, while shares of Abbott gained 52 cents, or 1.3 percent, to $41.82.

Meanwhile, Kindred Healthcare said it would pay $16 per share to buy up to a 14.9 percent stake in Gentiva Health Services. That’s just short of the 15 percent limit imposed by a shareholder rights plan that Gentiva’s board adopted earlier this year. Kindred climbed 36 cents, or 1.5 percent, to $24.74, while Gentiva gained 39 cents, or 2.5 percent, to $16.21.