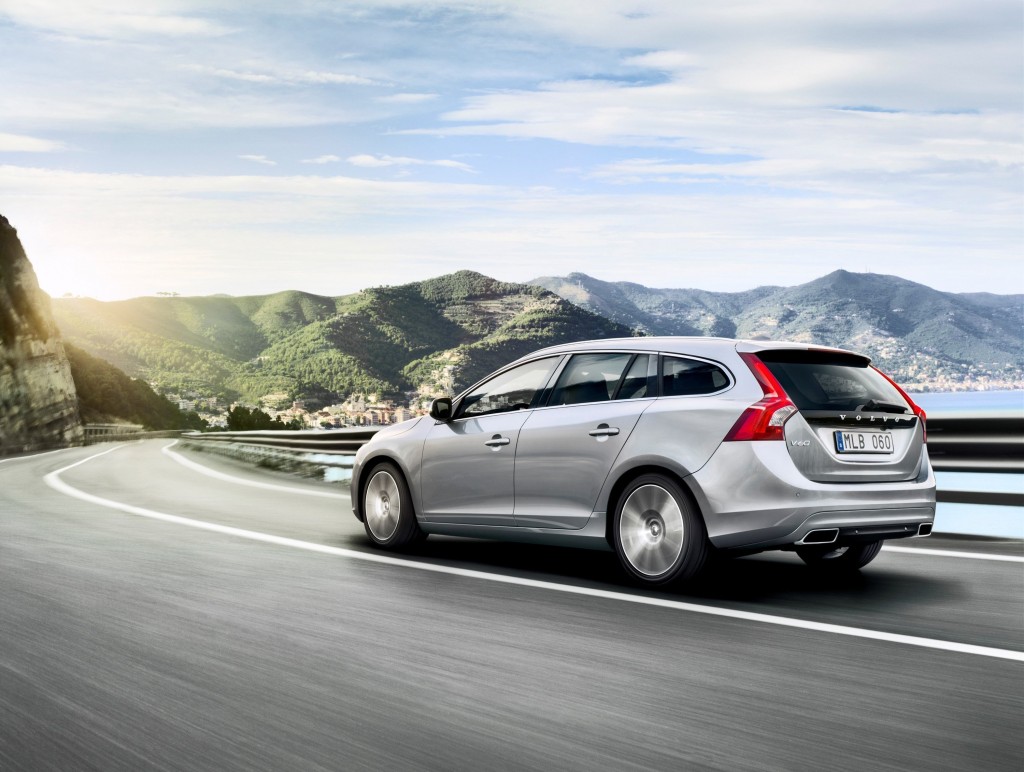 In my leafy suburb, the vegans and Democrats — all 11 of them — drive dusky old Volvo wagons shaped like cargo containers.

Square and steely as Richard Nixon, these Swedish boxes on skinny wheels could probably survive an airdrop.

But the car’s parka-and-rubber-boots image began to radically change a few years ago with the introduction of the svelte S60 sedan, a Volvo that people actually park in garages.

And now comes the striking V60, a wagon guaranteed to alter our view of Volvos as vehicles for people who grow vegetable gardens in their front yards.

As a libertarian on the edge of town, I’ll miss those all-weather warriors.

But just take a look at the V60 I had recently, a wagon so dramatically styled that it could almost pass for a concept car lounging atop flashy 19-inch wheels.

Did we get hit by a meteor or something?

Ford owned Volvo for years — the current Taurus sedan is still on a Volvo-derived platform — but it sold the company to Geely Group Holdings in China in 2009.

Since then, Volvo — Latin for “I roll” — has mostly struggled in the U.S., its sales down 10 percent last year and another 9.8 percent through May.

New this year to the U.S., the silver-blue V60 wagon I had recently wore a version of Volvo’s traditional big grille, now a more aerodynamic, four-bar model flanked by highly contemporary headlamps.

A long, sloping hood sort of blurred the fact that the V60 was front-wheel drive. Moreover, the hood was raised, with chiseled lines on its perimeters.

A well-placed character line swept off the back side of the headlamps, tying the front of the car to its distinctive, extremely vertical bat-wing taillamps.

Even odder for a Volvo, the V60’s sleek body clung tightly to good-looking 10-spoke wheels and 235/40 tires. (Volvos of the past had all the stance and grace of a John Deere tractor.)

Also fresh was a new two-liter, turbocharged four-cylinder engine twisting out a stout 240 horsepower and — more important — 258 pound-feet of torque at a low 1,500 rpm.

Tied to an eight-speed automatic, the little engine generally felt fortified with boost from 1,500 rpm on.

I never detected any lag. The engine had good surge away from stops and stout low- and mid-range torque, pushing the 3,500-pound wagon to 60 in an estimated 6.1 seconds.

And it responded to all provocation with a satisfying growl.

Although the eight-speed transmission upshifted a bit too quickly for my taste, it would hold the engine in gear under hard throttle.

Presumably, the quick upshifts were some computer’s attempt to maintain the V60’s estimated fuel economy of 25 miles per gallon in town and 37 on the highway.

The V60’s complete name, incidentally, is V60 T5 Drive-E, which sounds like some sort of goofy hybrid airplane.

It’s not — yet. But at some point in the near future, according to Motor Trend, the V60 will get an electric motor on its rear axle, giving it gas-electric all-wheel drive.

But it felt a bit out of the mainstream, so drive one before you get too dazzled by the V60’s allure — an affliction I know all too well.

The upside is the car corners with virtually no lean, maintaining pretty impressive balance and grip for a front-driver. If you really push it, the Volvo will understeer, but its limits are surprisingly high.

At low speeds, the car steered heavily. Fortunately, it lightened as speeds increased, but I got pretty tired of wrestling the V60 through 10 mph parking garages.

I wonder: When will automakers learn to consistently tune their electric power-assist steering units?

The minimalist dashboard, for example, rose gently over the instrument panel, dropping as it moved to the right.

A large, brushed-silver center stack featured a 7-inch touchscreen and highly functional knobs and buttons for the climate-control and audio systems.

Every Volvo needs a couple of quirks in its bag. And the V60’s big, round digital speedometer displayed a stylized profile of the car that faded away as you buckled in.

To the right, a tachometer set up strangely as a bar graph remained largely indecipherable at a glance, even after a week of driving the car.

And the car’s radical-looking top appears to cut fairly hard into headroom in the back.

But the rear seats are set low. Headroom for me was adequate, but the legroom was kind of tight, meaning kids might be happier in back than most real adults.

I spent most of my time up front, luckily, wrapped in fine, smooth black leather seats with white stitching on their bolsters.

I kind of doubt that high-zoot new Volvos such as the V60 can tackle mud and snow and ice as effectively as the old ones, particularly front-wheel-drive versions like the one I had.

But the V60 still comes standard with Volvo’s tough-times genes, and I came to view it as the wagon that emerged from one of those cargo containers.

— Engine: Turbocharged two-liter four-cylinder with 240 horsepower and 258 pound-feet of torque