US Students in Middle of Pack on Financial Knowhow 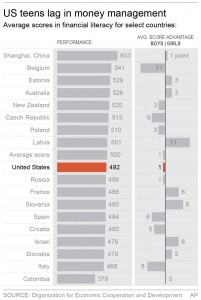 In an increasingly global economy, just 1 in 10 teenagers around the world is able to make some key — but complex — financial decisions, including choosing among various loans or analyzing invoices and pay slips.

The picture is no better in the United States, where only 9.4 percent of 15-year-olds were able to answer the most difficult questions on an international test of their financial knowledge and skills. More than 1 in 6 U.S. students did not reach the baseline level of proficiency in financial literacy. At best, those students could make only simple decisions on everyday spending, said a report released by the Paris-based Organization for Economic Cooperation and Development.

OECD called financial literacy “an essential life skill” for teens. Already at 15, many have bank accounts and debit cards. And “many students nearing the end of compulsory education also have to decide, with their parents, whether to continue with post-compulsory education and how to finance such education,” the report said.

Alex McClain, 15, of Anderson Township, Ohio, does not have a bank account. But he says taking a personal-finance course last semester has better prepared him.

“I learned about how to do a check, even though I rarely will do that,” McClain said during a visit to Washington. “I know how to manage money better now, and how to get out of bankruptcy if you get into a problem.”

China’s financial hub of Shanghai had the highest average score — 603 points — for teens who participated in OECD’s Program for International Student Assessment, or PISA. The U.S., by comparison, had an average score of 492 — smack in the middle of the 18 countries and economies studied. Colombia, at the bottom, scored 379.

In the rankings, Shanghai was followed by the Flemish Community of Belgium, Estonia, Australia, New Zealand, the Czech Republic, Poland, Latvia, the U.S., Russia and France. At the bottom of the list: Slovenia, Spain, Croatia, Israel, the Slovak Republic, Italy and Colombia.

“Our economy is changing so much, and the idea of young people going into the world of work, staying with one job for 40 years, having secure pension and retirement, those jobs are basically gone,” Duncan told reporters. Young people need to have a “level of financial literacy that 20 or 30, 40 years ago, maybe wasn’t applied. But today it’s an absolute necessity.”

The questions on the two-hour paper test ranged from simple to complex. The easiest questions asked students to display basic financial-literacy skills, such as recognizing the purpose of an invoice or comparing prices per unit to determine which had a better value.

The most difficult asked students to analyze two loan proposals with differing rates and terms and choose the better offer.

Michael Davidson, head of early childhood education and schools division for the OECD, says successful schools don’t let students fall behind. Shanghai schools, he said, perform well because they identify students who are struggling and provide the support those children need.

In New Zealand, for example, financial literacy has been included in the curriculum since 2007, the report said. And in the Pudong New Area of Shanghai-China, regular training on finance has been part of the program since 2009 in primary and lower secondary schools.