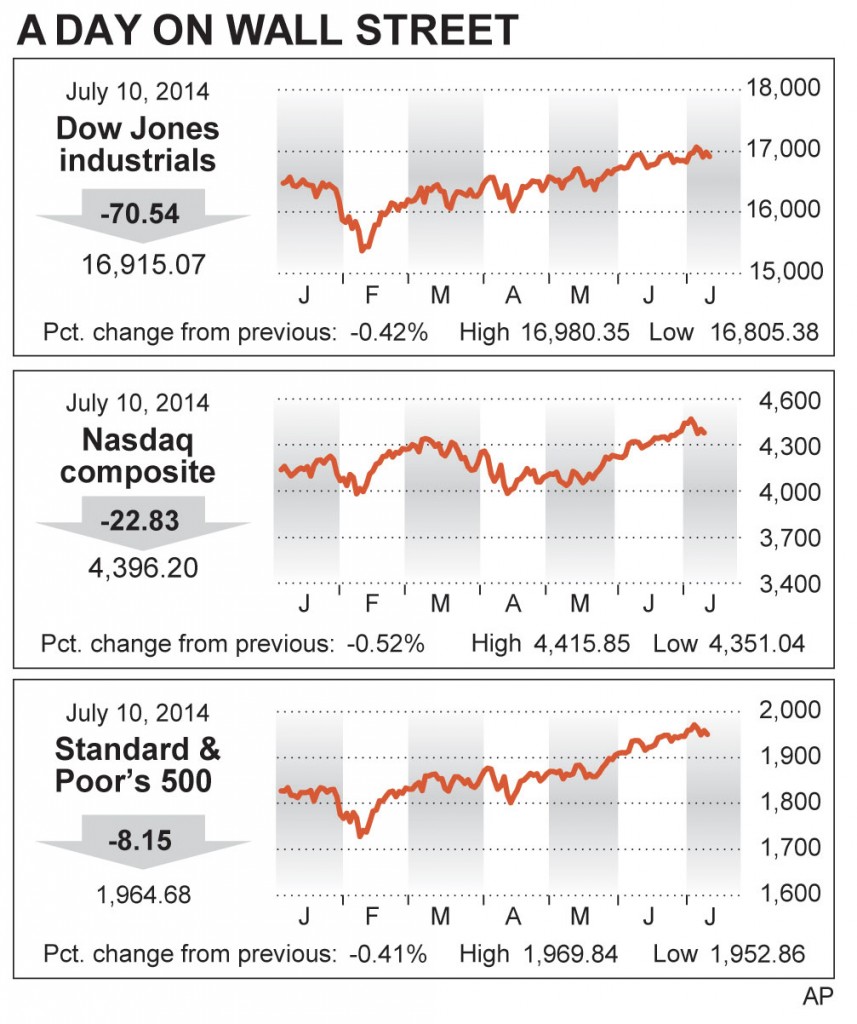 Stocks fell Thursday as worries about the soundness of a European bank scared U.S. investors, prompting them to sell stocks and snap up less risky assets like gold and governments bonds.

Fears emerged overnight about the financial stability of Espirito Santo International, a holding company that is the largest shareholder in a group of firms, including the parent of Portugal’s largest bank, Banco Espirito Santo.

Espirito Santo International reportedly missed a debt payment this week and was cited for accounting irregularities — similar to issues that sparked Europe’s debt crisis four years ago. The bank troubles had traders and investors talking about another European debt crisis.

Thursday’s stock selling started in Europe, and spread to the U.S, where the Dow Jones industrial average plunged as much as 180 points within the first half hour of trading.

But anxiety in the U.S. quickly subsided and the market clawed back in afternoon trading. While the market never fully bounced back, the decline in the Dow was roughly half of what it was at the beginning of the session.

Portugal is one of the smaller eurozone economies and, like Greece and Ireland, needed an international rescue in 2011 during the continent’s debt crisis. A three-year economic recovery program was supposed to have straightened out its finances.

That debt crisis in Europe was largely responsible for the U.S. stock market’s last decline of 10 percent or more, known as a “correction” in Wall Street parlance. Investors back then worried that the crisis would spread to the U.S., which was starting to recover from its own financial trauma.

Traders and market strategists pointed to a couple of reasons why stocks didn’t continue falling in the U.S.

First, because it has been a relatively quiet week for Wall Street, with little economic data and only a couple companies reporting quarterly results, any negative news was likely “met with overreaction,” Larson said.

“After participants had time to step back and assess, many realized the U.S. is in a relatively good spot compared with [Europe],” he said.

Second, even with the U.S. market trading near all-time highs, many investors are sitting on large amounts of cash. Any noticeable fall in stock prices would likely mean investors would step in.

“Generally, people are willing to put money into this market when the opportunity presents itself,” said Erik Davidson, deputy chief investment officer of Wells Fargo Private Bank, which manages $170 billion in assets.

Investors did seek out some protection Thursday. Bond prices and gold rose as investors moved money into those traditional havens. The yield on the U.S. 10-year note fell to 2.54 percent from 2.55 percent late Wednesday. Gold rose $14.90, or 1.1 percent, to $1,339.20 an ounce.

The Dow Jones utility index, a collection of 15 utility companies, rose 0.6 percent — the only major index to rise Thursday.